In a vote of media members who cover the league, Boise State was picked to win the Mountain Division title as the Broncos garnered 20 first-place votes and earned a total of 125 points. The Broncos went 8-0 in league play last season and beat Hawai’i 31-10 in the Mountain West championship game.

This marks the eighth season of divisional play for the Mountain West, which moved to the two, six-team divisional format in 2013 following the additions of San José State and Utah State.

Utah State returns 13 starters (8 on offense, 5 on defense) from last year’s team that finished with a 7-6 record and played in its 14th bowl game in school history in the Tropical Smoothie Cafe Frisco Bowl, losing to Kent State. USU concluded Mountain West play with a 6-2 record to finish third in the Mountain Division.

Highlighting Utah State’s returners in 2020 is senior WR Savon Scarver, who is just the third consensus All-American in school history. Scarver was named a first-team All-American from the Walter Camp Football Foundation, the Football Writers Association of America and Phil Steele’s Magazine, and earned second-team All-American honors from the American Football Coaches Association as a kick returner following his sophomore season in 2018.

Scarver was also named first-team all-Mountain West as a kick returner as both a sophomore and junior in 2018 and 2019, respectively. USU also returns senior safety Shaq Bond, who earned honorable mention all-Mountain West honors a season ago.

In the past week, the Aggies also received commitments from two former University of Utah players: Jason Shelley, a quarterback, and Devonta’e Henry-Cole, a running back. Those potentially key but late additions likely were not factored into the voting.

END_OF_DOCUMENT_TOKEN_TO_BE_REPLACED 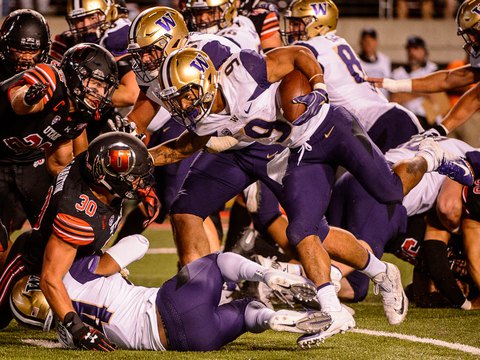 Red All Over: Getting that first Utes game under my belt
By Josh Newman • 7m ago

Letter: The history of the Second Amendment
By Loraine Brandt | The Public Forum • 37m ago