Thousands upon thousands of Latter-day Saint women know all about the above after accepting President Russell M. Nelson’s invitation last fall to swear off social media for 10 days.

Now, best-selling Amy Blankson has surveyed thousands of female members about their experience. She shared her findings in a Tedx Talk earlier this month at Brigham Young University.

For starters, Blankson, who is not a Latter-day Saint, discovered that the overwhelming majority of women were far from willing participants. More than eight in 10 (82%) did not want to undertake this challenge. They did so only out of obedience or to ease their guilt.

Afterward, however, they found the project packed a payoff:

“I invite you to try this experiment for 30 days and record your experience,” she said, according to a news release. “ … Imagine what can happen to your life when you start to know that the scriptures are answer books.”

‘Mormon Land’: They leave their bodies and then come back — an ER doc and a hospice chaplain discuss the afterlife and near-death experiences

‘Mormon Land’: Why the temple marriage change is the right move toward more inclusion and how bishops could still stand in the way

Latter-day Saint men have dodged such a social media charge — so far — though they were told in the April General Conference to “get up off the couch, put down the remote and,” Nelson said, “wake up from [their] spiritual slumber.”

As an apostle for more than three decades and a general authority for nearly half a century, M. Russell Ballard has visited scores of nations. But he had never set foot in the world’s second most-populous country until this week.

“I have been traveling and representing Jesus Christ and his church for 43 years. How have I missed coming?” the 90-year-old Ballard asked hundreds of Indian Latter-day Saints gathered in New Delhi. “I am thrilled to be here. You are stunning.”

Ballard — acting president of the Quorum of the Twelve Apostles and second in line, after Dallin H. Oaks, to assume the faith’s reins — urged India’s members to “do the simple things every day.”

“Don’t let it get complex. Just stay anchored to the pure, simple and beautiful doctrines of the restored gospel of Jesus Christ,” he said. “Keep things as simple as you can, keep building faith, building your spiritual self that is eternal.”

Ballard, who lost his wife of 67 years last fall, said he is able to carry on “with enthusiasm and with love because I know where Barbara is. I know she is alive and she is waiting in the great world of the spirits of the dead.”

Traveling with Ballard, Dean M. Davies — first counselor in the Presiding Bishopric, which oversees the faith’s vast financial, real estate, investment and charitable operations — assured Latter-day Saints in Bengaluru that plans for the faith’s first temple in India were proceeding.

“We hope to share details of the design and location before the end of the year,” he said in a news release.

India, the world’s largest Hindu nation, is home to about 14,000 Latter-day Saints.

Nelson in the Pacific

He met with royalty, members, missionaries, ministers, mayors and Muslims. He preached prayer, love, family, obedience, the Book of Mormon, citizenship and, above all else, Christian discipleship. And he did it all in a matter of days in nations thousands of miles apart spread over the world’s largest ocean.

Here is a snapshot of the stops President Russell M. Nelson has made so far in his nine-day, seven-nation Pacific tour:

• In Hawaii, he — with wife Wendy and apostle Gerrit W. Gong and wife Susan — huddled with young single adults and community leaders before a devotional.

“What God wants is for you to have immortality and eternal life,” Nelson told the young people. “I don't think it matters to him what your occupation is. What matters to him is what kind of a person you're going to be, not what you’re going to do.”

• In Samoa, the island nation’s head of state welcomed the Latter-day Saint leader, who later warned parents of “difficult days ahead” and urged them to protect their children.

“The main message everywhere we go is to come unto Christ,” Nelson said, “ … because it will make life better for you.”

• In Australia, the 94-year-old prophet-president credited the Book of Mormon for tripling the church’s membership in the Land Down Under since his call to the apostleship 35 years ago.

It’s true, he said of the faith’s foundational text. “Without the Book of Mormon, there would be no gathering of Israel.”

• In New Zealand, Nelson met in Wellington with Prime Minister Jacinda Ardern, a former Latter-day Saint who won world praise for her committed and compassionate response to mass shootings in March at two mosques.

She’s a “real leader,” Nelson said. “It’s an unlikely scenario; a young mother leading a great nation, a peacemaker, a policymaker, consensus giver. We’re very impressed with her. She’ll have a great future.”

He later donated $100,000 to help those religious sites rebuild after the attacks (“We’re brothers,” Nelson told the Muslim leaders) and announced where a new temple would be built in Auckland.

• In Fiji, Nelson spoke to nearly 5,000 members at a precipitation-threatened outdoor devotional in the capital of Suva. “May I thank you for your great faith,” he said. “I wondered if you could do it and you did it. You turned off the rain.”

Nelson also led the children in singing the Latter-day Saint classic “I Am a Child of God.”

• In Tonga, where more than 60% of the citizens are Latter-day Saints, Nelson met with the king and queen — His Majesty King Tupou VI and Her Majesty Queen Nanasipau’u — in the Royal Palace in the capital of Nuku’alofa.

Nelson’s Pacific trek wraps up May 25 after visiting Tahiti.

For the third straight year, the church is donating millions to help tens of thousands of refugees resettle in the United States.

LDS Charities, the faith’s humanitarian arm, is giving $1.2 million in cash and $2.8 million in goods, to nine agencies, including the Lutheran Immigration and Refugee Service, the International Rescue Committee, and the U.S. Conference of Catholic Bishops.

“As followers of Jesus Christ, we are under a heavenly obligation to love God and love our neighbors in better ways,” Sharon Eubank, president of LDS Charities and first counselor in Relief Society general presidency, said in a news release. “We are impressed by the innovative approaches refugee-resettlement agencies are using to help people learn English, find jobs and culturally adapt to the United States. Our partnership is meant to accelerate the work and highlight ways families can get involved in helping refugee neighbors settle into a new place.”

Yet another Utah pioneer-era temple will close this year for renovation.

The temple, the first in Utah, is expected to reopen in 2022 after an open house and rededication.

Plans were unveiled last month to overhaul and strengthen the iconic Salt Lake Temple against earthquakes, a project that will begin Dec. 29 and is expected to take four years.

Two other historic Utah temples — in Logan and Manti — also will be renovated. Details of those projects have yet to be announced.

Even if the name fits, don’t wear it

The Utah-based faith announced last week that it has removed “Mormon” and “LDS” from its mobile apps.

“LDS Tools” is now “Member Tools,” for example, “LDS Media Library” is “Gospel Media,” and “Mormon Messages” is “Inspirational Messages.” Other services and applications simply dropped “LDS” from the name.

The church also noted in a news release the terms “LDS” and “Latter-day Saint” should not be used to qualify objects such as temples, scriptures or doctrine. Leaders have said, however, that they prefer the term “Latter-day Saints” — as opposed to “Mormons” — when referring to members.

The South American country, with more than 600,000 members, has temples in Lima and Trujillo with a June 8 groundbreaking set for a fourth in Lima’s Los Olivos district.

Elsewhere in South America, the renovated temple in Asunción, Paraguay’s only such edifice, will be rededicated Nov. 3 after an Oct. 12-19 open house.

In North America, the Oklahoma City Temple is open once again.

“It will benefit our ancestors,” he said in a news release. “Don’t forget that our ancestors are real. They are waiting and when we do their [temple] work, the warm feeling [we feel] is the [Holy] Spirit. That warm feeling will stay with you forever.”

Welfare Square: The shape of service

U.S. Agriculture Secretary Sonny Perdue liked what he saw this week when he visited the church’s Welfare Square in west Salt Lake City.

“The USDA could learn some lessons from Welfare Square on how to help people,” Perdue said. Self-sufficiency and independence “through the dignity of work and providing for one’s family instead of relying on social services" should be the goal for the whole country. “Government can’t be doing it all.”

END_OF_DOCUMENT_TOKEN_TO_BE_REPLACED 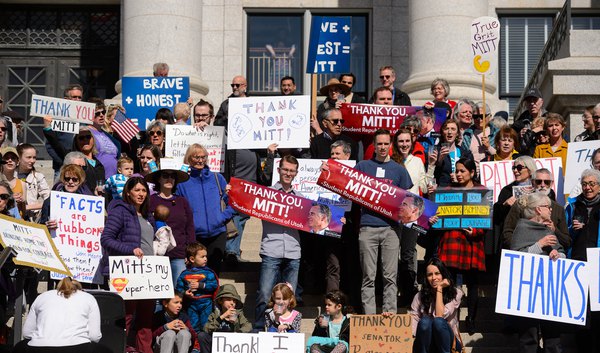 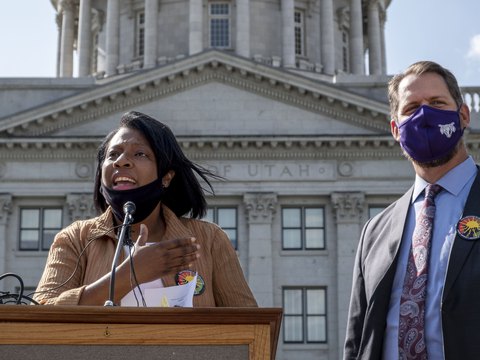 Pope says children with autism are beautiful, unique flowers to God
By The Associated Press • 2d ago
END_OF_DOCUMENT_TOKEN_TO_BE_REPLACED
L

Think you know Utah? Take our news quiz and find out.
By Kelly Cannon • 19m ago

Letter: Where in the world is Spencer Cox?
By Vagn Jensen | The Public Forum • 19m ago