People who are upset with the way they are being governed have taken to the streets by the tens of thousands in some of the world’s greatest cities — London, Paris, Hong Kong and Seoul. It is impressive but not, always, effective.

In another of the world’s greatest cities — Salt Lake City — a handful of people from across the political spectrum have launched an effort that is less spectacular but could lead to a significant achievement for democracy and good government.

Hard on the heels of the Utah Legislature’s passage of a sad hash of bad ideas that is being portrayed as tax reform, a bipartisan group of activists and concerned citizens activated the state law that allows acts of the Legislature to be beaten back through a process that starts with the circulation of petitions and could end with a vote of the people in November.

The law makes it possible. Not easy.

Sponsors must gather the signatures of 115,689 registered voters by Jan. 21 in order to stop the new tax code from taking effect, pending the November general election. To prove that the desire to overturn the Legislature is widespread throughout the state, the law further demands that the signatures be drawn from 8% of registered voters in at least 15 of the state’s 29 counties.

Such hurdles have been cleared before, but usually over a longer timespan and generally by employing paid signature-gatherers. One of the leaders of the revolt, former state Rep. Fred Cox, a West Valley City Republican, says the group will not pay for signatures but will, instead, count on a wide swath of public support to round up the needed names.

Rather than taking to the streets, backers of the drive are making use of the internet — https://utah2019tax.com/ — and social media to promote their cause, recruit signature-gatherers, solicit donations to cover printing costs and invite the public to a series of events.

And, in a more traditional use of legacy media and political speech, there was a news conference to announce that just about everyone now running for governor — Republican and Democrat — opposes the tax reform plan and supports the referendum.

(Lt. Gov. Spencer Cox, who announced his opposition to the bill before it was passed — and reminded us all of that on Twitter — understandably declined to join all the other candidates for governor on the question of a referendum because, as the state’s chief election officer, he will be refereeing it.)

The tax reform package is long, cumbersome and complex. The bottom line is a clear effort to make the state’s tax structure more regressive by cutting Utah’s already low income tax rate and dumping a huge increase in the sales tax rate charged on groceries.

Tribune Editorial: Preserving Utah, one piece at a time

Promised rebates and credits are supposed to make the pill go down easier. But those provisions were obviously written by people who are used to filing forms and hiring accountants, not by anyone in a household where the parents are already counting every penny at the supermarket check-out.

The petition drive faces a huge uphill task, not because its cause is not just, but because the law is designed to make such things difficult. And overturning an act of the Legislature should not be routine.

But those seeking to nullify the Legislature’s tax reform package have right on their side. May they be successful.

END_OF_DOCUMENT_TOKEN_TO_BE_REPLACED 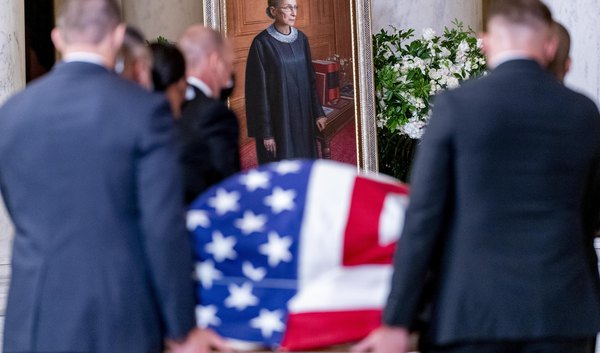 Letter: Trump is creating a dystopian future
By Patricia Becnel | The Public Forum • 8m ago