Almost all of the pressure to impeach swirls around whether President Trump obstructed justice, invited interference in our election by our number one foreign enemy, or whether he is now guilty of extorting another foreign government using taxpayer funds.

Other calls for whisking Trump out of the White House have been tied to the 25th Amendment and hopes that his cabinet will declare him cognitively, temperamentally and behaviorally incompetent. While all of these reasons individually, and even more so cumulatively, appear justified, there is a much more compelling reason for impeachment that so far has not been part of the ever growing impeachment smorgasbord.

Surely, undermining the survival of the human race would qualify as “high crimes” and far worse than “misdemeanors.”

If there is any question of fact or uncertainty involving Trump “colluding” with Russia or extorting the Ukraine for his own personal benefit, there is even less question of fact regarding Trump’s environmental agenda, which, as a package deal, seems like a Lex Luthor-like scheme to usher in a climate apocalypse as quickly as possible.

Trump’s many other alleged offenses usually involve some behind-the-scenes conversation, an unrecorded phone call, a clandestine meeting, something that requires witnesses, or specific interpretations of the law or the Constitution. Many dots have to be connected. While it takes two sides to have a political squabble, and even matters of legal interpretation are often open to debate, there are not two sides to objective scientific truths. No dots have to be connected.

There is no scientific dispute about the existence of the climate crisis. It is real, human caused and is dragging us inexorably to the brink of an uninhabitable earth. The only unknown is just how long we have before business as usual ignites an irreversible, runaway disaster. Every scientific organization in the world has endorsed this as fact, as much as gravity or the theory of relativity.

Greta Thunberg, the brave, knowledgeable and articulate 16 year old from Sweden, in an impassioned scolding of the U.N. at their meeting this week pleaded, “I shouldn’t be standing here. I should be back in school ... yet you all come to me for hope? How dare you! You have stolen my dreams and my childhood with your empty words. ... People are suffering. People are dying. Entire ecosystems are collapsing. We are in the beginning of a mass extinction. And all you can talk about is money and fairytales of eternal economic growth. How dare you!”

And then. of course. Trump mocked her.

World health organizations warn of impending global public health disaster, that the lives of billions of people are at stake, with mass movement of climate refugees desperate to flee punishing heat, floods, drought and agricultural failure. The Pentagon warns that we are headed towards widespread societal chaos and war, including massive security risks even to the United States.

What follows from the science then is this loathsome reality: Trump’s aggressive attack on every environmental policy and regulation intended to mitigate the climate crisis is a historically unparalleled crime against humanity. He made the United States the only country on earth to pull out of the Paris Climate Accord.

Alexandra Petri: Children, stop yelling at me, or I will make certain the climate changes for the worse

Cherise Udell: We need 11 million people to stand up against climate change

Given the narrow window humankind has to avert disaster, a window that gets smaller by the day, Trump will almost undoubtedly end up contributing to more human suffering and death than history’s most diabolical megalomaniacs, more than Hitler, Stalin, Pol Pot, Mao Zedong, Robespierre, Ivan the Terrible and Genghis Khan combined.

How is that not the number one reason for impeachment? In fact from that perspective how is that not worthy of a trial at the International Criminal Court at the Hague?

Certainly plenty of others should join Trump as defendants at that court — Charles Koch, the CEOs of major fossil fuel corporations and numerous members of Congress to name just a few.

But if we’re going to impeach Trump, “how dare we” leave out his unmatched contribution to what is turning out to be the world’s greatest crime?

END_OF_DOCUMENT_TOKEN_TO_BE_REPLACED 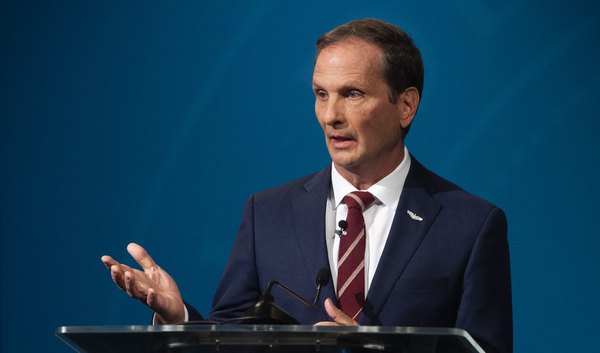 Letter: Skordas is the right choice for Utah attorney general
By David W. Brown | The Public Forum • 23h ago

Nicholas Kristof: America and the virus: ‘A colossal failure of leadership’
By Nicholas Kristof | The New York Times • 1d ago
END_OF_DOCUMENT_TOKEN_TO_BE_REPLACED
L

Letter: Skordas for attorney general
By Marty Bernstein | The Public Forum • 46m ago