Alexandra Petri: It is increasingly clear that none of you read my report

My fellow Americans, it is not Mueller Time. It will never be Mueller Time. I wish you would remove my likeness from your T-shirts and steins. I, Robert Mueller, will not be fired. I quit.

First off, it is obvious that none of you has actually read the report, or you would all sound like Justin Amash. Pete Buttigieg read “Ulysses,” but you will notice how quiet he is on the subject of my report findings.

Everyone who said things about the report said things like, “I liked the big page that was just black” and “It was very good how the redactions were color-coded” and “I liked that it said ‘The Mueller Report’ on every page” and nobody talked at all about the actual contents. The sheer lack of discussion of the election interference, which, again, we did find had majorly happened — there is no hope for you.

Someone spoke to me at length about how they loved the report and the green things that were cut out and the red things and the yellow things, and it slowly dawned on me that he had mixed up my report and "The Very Hungry Caterpillar."

Anyway, this press conference is for those of you who did not read the book, which, I assume, is all of you. Please put on your listening ears.

On the obstruction of justice question, just so we are clear, let me try this one more time:

So let's say I am a lifeguard and I have a whistle. You are not supposed to run next to the pool, and if you do, I am supposed to blow the whistle. But pool policy (which assuredly only I, the lifeguard, have read!) states that from 2 p.m. to 3 p.m., it is quiet time and no whistles are to be blown. So, if I do not blow my whistle at 2:30 p.m., that does NOT mean that nobody was running next to the pool. Right? No, this is needlessly convoluted, and I sense I am losing you, you short-attention-spanned monsters who cannot even sit down briefly with a gently redacted 400-page report that I, personally, considered to be a riveting read.

Let's say I am the guy who tastes the king's food to see whether it is poisoned. Let us also say I am allergic to peanuts. I cannot vouch that any of the substances that contain peanuts are not poisoned, because I don't taste those. So if I bring you a tray of peanut butter sandwiches, you cannot say, "Oh, well, the royal food taster brought these! They are definitely safe to eat!" You know my thing with peanuts! Not mine, personally. The food taster in this analogy. No. Hang on, I'm going to come up with a good one.

Uh. Let's say that I am a fireman. I drive a big red truck. Weee-ooo, weeee-ooo. That is my siren! I have a hose full of water, which is not useful for putting out gas fires. Suppose that I come from a building with my eyebrows singed off and say, "My hose full of water would have served no purpose there!" Does that mean there was not a fire there? Or could it mean that there was a gas fire there, about which I could do nothing?

Alexandra Petri: I, Nancy Pelosi, wish someone would do something about Trump

What I am saying is there are, historically, remedies other than bringing criminal charges for when a president does something wrong. There are to this effect a great many books, even front pages of newspapers with very large type, just waiting for you to read!

Oh, who am I kidding?

END_OF_DOCUMENT_TOKEN_TO_BE_REPLACED 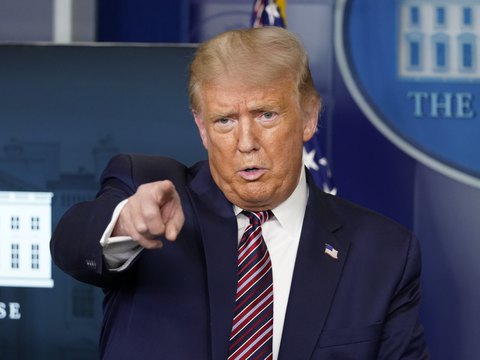