(Jeremy Harmon | The Salt Lake Tribune) Jim Dabakis gets bunny ears from his husband, Stephen Justesen, as he poses for a p...

(Jeremy Harmon | The Salt Lake Tribune) Jim Dabakis thanks supporters as election results start to come in during an elect...

(Jeremy Harmon | The Salt Lake Tribune) Jim Dabakis gets bunny ears from his husband, Stephen Justesen, as he poses for a photo with supporters during an election night party in Salt Lake City on Tuesday, August 13, 2019.

(Jeremy Harmon | The Salt Lake Tribune) Jim Dabakis thanks supporters as election results start to come in during an election night party in Salt Lake City on Tuesday, August 13, 2019.

Mendenhall earned some 23.7% of the votes. Dabakis was close behind at 21.56% and Escamilla was within striking distance, trailing by less than 1 percentage point at 21.19%.

The results are partial — reflecting just over 29,200 votes. Salt Lake County Clerk Sherrie Swensen said late Tuesday she had “no idea” how many ballots are outstanding at this point. The next vote totals will be released 3 p.m. Thursday.

The top two vote-getters will advance to November’s general election to determine who will replace Salt Lake City Mayor Jackie Biskupski, who is not running for reelection. The other six will go home.

“I’m so proud of the campaign we ran," Mendenhall, 39, told The Salt Lake Tribune on Tuesday after the first round of ballots dropped. “We ran with grit and integrity as our focus and no matter what the results are, I’m proud of our work.”

Mendenhall, who has a background in the nonprofit sector and got her entry into politics through clean air work, is serving her second term on the City Council — experience she touts as a much-needed boon for city residents.

If elected, she has said air quality would be among her top issues and has promised to use taxpayer dollars to incentivize clean-up of the city’s most polluting buildings and to create a Salt Lake City-based lawnmower and snowblower exchange program. When it comes to addressing the city’s affordable housing gaps, Mendenhall has pledged to address unfair eviction practices and geographic inequities.

She said it was too soon to comment on specific ballot return numbers, but told supporters that the early results “are showing that Salt Lake City is ready for a mayor who knows how to work Salt Lake City government and make it work better for us.”

Dabakis, 65, showed up to his campaign watch party at Trolley Square Tuesday night after a day of chatting with people on city streets and said he primarily felt relief that the primary campaign was behind him and the outcome was in the hands of the electorate.

After the first batch of ballots dropped, Dabakis told The Salt Lake Tribune he was “excited" to see the results, though he bemoaned low voter turnout in a speech to supporters.

“It really just matters that you get into the second heat," he said, "and we’re certainly there.”

Dabakis spent six years as the only openly gay member of the Legislature, where he became known for his bombastic style and flair for the dramatic.

During the campaign, he has pushed for free-fare transit across the city — with the help of state money he says he can wrangle — and has positioned himself as the candidate best able to work across party lines to accomplish “big ideas.” On the issue of affordable housing, he said he would like the Legislature to bond for $100 million or more to create a multitude of units at market price.

Ranking third by only 109 votes behind Dabakis, her former colleague in the Senate, Escamilla thanked her supporters and staff for their hard work and said she would wait to comment on numbers until the final results are released Friday.

“It is really too close to call right now,” she said. “This is not over.”

Escamilla, 41, has spent more than a decade serving in the Utah Legislature and also works as the vice president of community development at Zions Bank. She first came to Utah from Mexico as an international student more than 20 years ago and became a U.S. citizen in 2004.

She would become Salt Lake City’s first ethnic minority mayor if elected in November and says she would bring perspectives sorely needed to City Hall, including a knowledge of needs on the west side and an understanding of the city’s growing minority populations.

Throughout the campaign, Escamilla has positioned herself as the candidate with the best experience and relationships to work with the state Legislature to address problems ranging from air quality to the inland port, a massive distribution hub development planned for the city’s northwest side. She has also advocated for a better partnership with the Utah Transit Authority to increase access to transportation across the city.

Escamilla has received a large degree of support from her colleagues in the Legislature and also saw support at her campaign party Tuesday night from Biskupski, who said her appearance at the campaign party was not an explicit endorsement.

“I think she has all the characteristics it takes to be a very good mayor," Biskupski said of Escamilla, adding that she planned to see how the race plays out and decide later if she wants to make a formal endorsement.

Garbett, standing outside his Trolley Square campaign headquarters, acknowledged there was “a big gap between us and second place,” but said he wasn’t ready to give up hope with uncertainty about how many votes remained to be counted.

Penfold told The Salt Lake Tribune in a phone interview that he thought it was “unlikely” he would pull through.

Ibarra and Huck could not be reached for immediate comment Tuesday night. Before votes were counted, Goldberger was asking supporters for money via Facebook on Friday so he could file as a write-in candidate in the general election.

With a crowded primary and a number of forums that allowed for little debate, candidates have struggled to differentiate themselves to voters. Dabakis, who has the most money on hand heading into the general election in November, said he looked forward to a more robust debate in the months to come if he makes it through the primary.

“I think people know me as someone who enjoys life and likes to smile,” he said. “I think they’re going to see what I learned in six years in the Legislature on policy.”

Campaigning for the race, which has become one of the most expensive in city history, first began in October. Candidates have raised a cumulative $1.5 million and have spent $1.1 million on flyers, mailers and other campaign expenses as they seek a job that pays around $144,000 a year.

END_OF_DOCUMENT_TOKEN_TO_BE_REPLACED 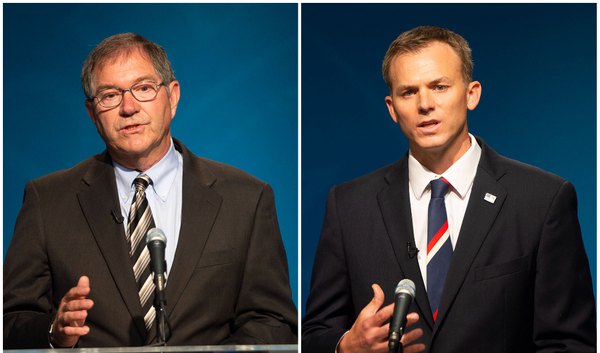 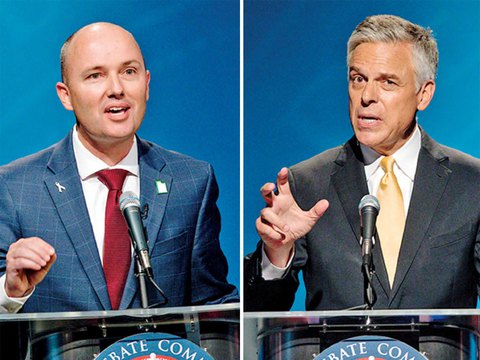 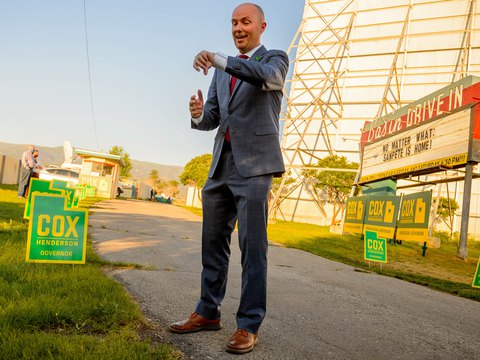 Behind the Headlines: Recapping the week’s news with KCPW and The Tribune
By The Salt Lake Tribune • 16m ago
END_OF_DOCUMENT_TOKEN_TO_BE_REPLACED