Urban environments made of concrete and asphalt are typically hotter than their rural counterparts, which can lead to negative health effects for residents.

(Sara Diggins | Special to The Tribune) A dying tree does little to shade the intersection of 500 S. and 1250 W. in Poplar Grove on July 16, 2021. Unshaded pavement in urban areas causes ground temperatures to rise, making neighborhoods warmer during summer months. Salt Lake City is looking to plant more trees to address these “heat islands.”

This story is part of The Salt Lake Tribune’s ongoing commitment to identify solutions to Utah’s biggest challenges through the work of the Innovation Lab.

Salt Lake City experienced its hottest summer on record, and climate reports only project it getting hotter.

Along with climate change, many Salt Lake and Utah County residents also have to battle effects of what researchers call urban heat islands.

On the hottest days of the summer, you may even feel it yourself -- walking downtown among the concrete buildings and asphalt streets can feel like walking in an oven -- but the shaded streets of, say, Sugarhouse or The Avenues provide pleasant strolling temperatures.

It’s not just your imagination, either. Temperatures in cities can change drastically from neighborhood to neighborhood -- potentially even block to block -- because of the heat island effect.

Salt Lake City faces some of the hottest temperatures from this effect, according to a 2015 study from the University of Georgia, which found temperatures in the city can be several degrees hotter than nearby rural areas even in the overnight hours.

Overnight, the asphalt and concrete maintains hot temperatures, offering no reprieve from the roasting hot days. 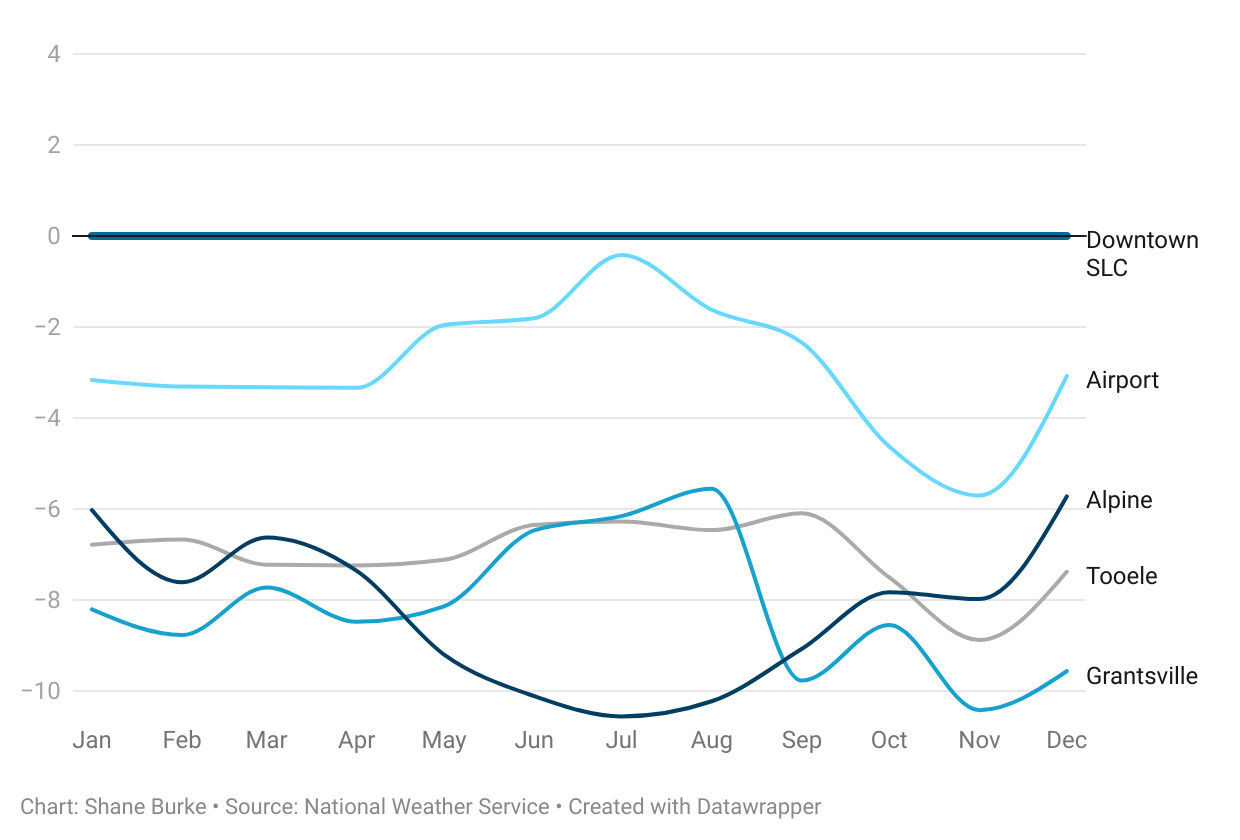 A couple degrees may not seem like that big a difference, but when it’s in the triple digits, a few degrees has a big impact. Cranking up the air conditioning isn’t an option for many people, and even for those who can, it’s a costly option with a negative environmental impact.

The cheaper, ecologically friendly and longer-term solution to lowering temperatures comes in the form of shade trees.

Salt Lake City is one of many cities around the world looking to cool their urban environments by planting more trees.

City roadways, parking lots and buildings soak up and radiate heat that would otherwise be deflected by vegetation like grass and trees in rural areas.

Urban forestry can be used to address heat in multiple ways, said Laura Bandara, an urban designer for the city. They can shade sidewalks for pedestrians, cool homes, reduce air conditioning use and reflect back the sun more than other surfaces, such as asphalt.

The city is developing a plan to prioritize tree planting in the areas that could use the shade the most. Mayor Erin Mendenhall has also committed to planting 1,000 trees this year, primarily on the city’s west side.

“The whole idea is to figure out a strategy to implement getting more trees — and healthy trees — in the places where they will provide the most benefit,” Bandara said.

The plan will have an equity focus, Bandara said. Neighborhoods with more people of color or poorer residents living there tend to have higher temperatures than other areas of cities.

“It does impact people who are historically marginalized along with children and seniors,” Bandara said.

Excessive heat can be unhealthy, even if it’s just a few degrees. Heat can lead to breathing problems, heat exhaustion and heat stroke, according to the Environmental Protection Agency. The Centers for Disease Control and Prevention found an average of 702 heat-related deaths in the U.S. each year between 2004 and 2018.

Excessive heat could also add an extra cost burden because residents in hotter areas run their air conditioners more and use more water to keep themselves hydrated and plants alive.

Along with negative health impacts of heat, excessive heat can affect critical infrastructure. The record temperatures in the Pacific Northwest this summer melted power cables and buckled roads.

Trees and other vegetation reduce the temperatures of these heat islands, but worsening droughts have made planting tricky. Cities and their residents need to plan where plants can have the most impact against heat while also accounting for water use.

Overall, though, trees account for much less water use than people think, University of Utah ecology professor Diane Pataki said.

The shade from trees can also help keep grass alive with less water, she said, since the shade slows the water evaporation.

A recent study by Pataki and U. researcher Carolina Gomez-Navarro found that the temperatures at large, grassy parks were two degrees cooler than paved areas — during the day and at night.

While grass cools the temperature, you may still feel hotter on a field of grass rather than under a tree. The study accounted only for actual temperature, but sun exposure and wind also affect how hot a person feels.

There is evidence that grass can cool areas in the city, Pataki said, but city planners and residents still need to consider the balance with water consumption.

“The key is to only have as much turf grass as you need,” Pataki said.

Trees are far from the only solution, said Ladd Keith, an assistant professor of planning and sustainable built environments at the University of Arizona.

Building parking garages instead of sprawling parking lots can reduce the heat, which the new airport took into consideration when building its garage, Bandara said. Narrowing streets can reduce the amount of heat from pavement. White roofs also deflect the heat.

Several efforts designed to reduce greenhouse gas emissions have the added benefit that they reduce the excess heat in urban areas, Keith said. Energy-efficient buildings don’t run air conditioners as hard, reducing the heat emitted from those systems. Increasing mass transit options and creating walkable and bikeable environments take cars —which can also heat up the area — off the roads.

“We’re already doing a lot of things related to heat,” Keith said. “We just don’t recognize them that way.”

Mill Creek Canyon visitors should expect delays for the rest of the summer. Here’s why.

Video: Body camera footage shows what happened when a member of the public was dragged out of a Utah Senate hearing

Should Tyler Huntley be your quarterback? The internet thinks so after Baltimore Ravens win

Intermountain Healthcare CEO to step down

Legal homeless camps, calls to suspend Davis and Alvord’s tweet to the VP on ‘Behind the Headlines’