Amid the global coronavirus pandemic, people of all faiths have learned to pour old rituals into new vessels.

Of course, these alternatives to communal worship are not free from the sense of loss that comes when congregants are separated. But they have been surprisingly creative and robust as technological substitutes for what has worked for centuries with in-person devotion — and have bonded believers across communities, countries and continents.

Pope Francis asked Catholics, wherever they were in the world at noon Wednesday,, to repeat in unison the Lord’s Prayer (known to Catholics as the “Our Father”). Other faiths, including the Evangelical Lutheran Church of America, joined in.

Utah Catholics seized that chance to say “a special prayer in union with the world,” says the Rev. Martin Diaz, pastor at the Cathedral of the Madeleine, “and with the people who are hurting the most and to ask God to get us through.”

Diaz and another priest in the Catholic Diocese of Salt Lake City have been livestreaming Mass from an empty cathedral every day since services were canceled due to the virus.

They celebrate the Mass as usual, but it mostly involves just the priests, a reader of scripture, an altar server, and an occasional musician — “definitely fewer than 10,” Diaz notes.

When it comes to Communion, they are the only ones who receive the wine and wafers. But even those who are not physically present in the church, Diaz says, experience a “spiritual communion.”

“It is something more than physical,” he says. “We are one humanity before God, and communion is an icon of that.”

All Latter-day Saint temples to close due to coronavirus

Coronavirus poses challenge for Catholics, Latter-day Saints, other believers: How do you ‘have church’ when you can’t go to church?

Care for yourselves and your loved ones, President Russell Nelson urges in global video message as Latter-day Saints brace for a Sunday without services

More than ever, this virus has made clear that everyone is in this together — Catholics, Latter-day Saints, Jews, Muslims, Buddhists and so many others, Diaz says. “That’s what religion is all about.”

Diaz and a fellow priest hear confessions every Saturday afternoon at the cathedral, now empty of all but the two men of the cloth.

Each man takes his places either in the screened confessional or on a chair outside it, to greet would-be repenters face to face. They remain 6 feet apart, Diaz says. “The only thing they can’t do is kneel. That would bring us too close.”

This past weekend, about five or so parishioners came to confession.

In Draper, the Rev. Stephen Tilley at St. John the Baptist Catholic Church heard confessions while sitting in his Jeep.

The penitent would come up to his window, where the bearded priest would listen, offer them advice and the “sacrament of reconciliation.”

It’s hard to be “pastoral and maintain social distance, since we are called to be in community — that’s why it’s called communion,” Tilley says. “All the priests are struggling to find ways to be with the people.”

In a reverse system, the Rev. John Evans of St. Thomas More Catholic Church in Cottonwood Heights had parishioners line up in their cars, while he strolled up to each to hear their confessions through the window.

Lent, 40 days before Easter, is a “penitential season,” Evans says. “We usually have a big penance service with hundreds of people or so, but it has been canceled due to the restrictions.”

In the past, “people have walked up to me in airports or at a hospital and asked me to hear their confessions,” he says. “This is no different.”

He got lots of thank-you emails and texts, he says, “People were very appreciative.”

The state’s largest synagogue is a blend of Conservative and Reform Jews, and Judaism has strict guidelines against using electronics on Shabbat. At the same time, holding prayer services with fewer than 10 people is also prohibited.

But Utah’s governor had asked people not to gather in groups of 10 or more. Was this an extraordinary enough circumstance to buck the guidelines about electronics and could those who tuned in to watch a livestream be counted among the required minyan?

After much debate within the community, Spector decided to stream the service from inside the synagogue with only himself and the cantor there in person.

“What we were doing was putting public safety first,” he says, “while still trying to maintain our Jewish values.”

To the young rabbi’s surprise and delight, the effort “went phenomenally well,” Spector says. “Hundreds of people are tuning in to our services from all over the country.”

Some who aren’t Jewish watched it just because they were curious about the service, he says. One made a $500 donation to Kol Ami to support the cost of streaming.

It’s tough for Jews from Logan to Provo and Price to worship in Salt Lake City regularly, he says. Many of them told Spector: “I can finally pray with my community.”

The ebullient rabbi prepared two sermons, for Friday night and Saturday morning. In both speeches, he talked about refugees.

“Every year on this weekend, I've prayed for refugees but never had the experience until now of feeling unsafe in my own country and my own home,” he told the congregation. “If there was a place where we could go, where we know coronavirus couldn’t touch us, would we go there?”

That is how refugees feel, Spector says, seeking a place where war and famine and loss would not touch them.

Familiar for some, new for others

To Utah’s evangelical Christian community, going virtual is nothing new.

“Our largest congregations have been livestreaming their worship for years,” says the Rev. Greg Johnson, who leads a consortium of pastors in the Beehive State. “So going fully online was not hard.”

Indeed, many pastors have reported a dramatic uptick in the number of viewers their online services attracted, Johnson says, several times more than those who have tuned in before this crisis.

For the past couple of weeks, Linda LaPlante and her husband of Capital Church in Salt Lake City have been hosting a Bible studies discussion over Zoom, an interactive site that facilitates online videoconferences.

“It was our first time doing something like this,” LaPlante says. "The church is really embracing this format. It was pretty exciting.”

Sure, there were technical glitches, she says with a sigh, but they got the hang of it before the time was up.

Last week, the 14 participants enjoyed discussing the previous Sunday sermon, which includes verses out of the book of John and Psalm 23.

“We are learning that the church is not a building,” LaPlante says. “It is the people.”

Like most other faith groups, Utah’s predominant denomination, The Church of Jesus Christ of Latter-day Saints, has suspended weekly services. It hasn’t provided an official substitute from church headquarters but rather has offered some suggestions about the best way to continue worship.

Members who are “sheltering at home” can follow the faith’s weekly scripture reading guidelines, laid out in a curriculum titled, “Come, Follow Me.”

They are watching newly released Book of Mormon videos on YouTube and reading or listening to sermons given at the faith’s General Conferences.

Not every congregation is doing it the same. Local Latter-day Saints are creating their own ways to study and worship at home.

Some wards have used Zoom for abbreviated online “sacrament meetings,” with a couple of short sermons and some music. Others are watching online “gospel doctrine” lessons to study scriptures.

One aspect of weekly worship that is essential in person but impossible to replicate virtually is taking the sacrament. Only Latter-day Saint men who hold the priesthood are authorized to break the bread, pour the water and pray for God’s blessing on those emblems — and only as authorized by the church.

In the current situation, the church has told its male officials — bishops and stake (regional) presidents — to individually authorize men to administer the sacrament at least once a month to all those living in the home.

Following the church’s guidelines, Bishop Jerrald Roberts of the Richards Wards in Sugar House has instructed the “worthy priesthood holders” in his congregation to administer the sacrament to family members and others in the home.

He has asked the older men to stay away, using only younger men to fulfill this assignment. He requires they maintain social distancing and wash their hands or use sanitizer before and after each ritual.

“We want to be flexible,” Roberts says, “but do it in a sacred way.”

All this sheltering at home highlights the disadvantages for women in the church, says April Young Bennett of South Jordan.

For many single women, says Bennett, a writer for the Exponent II Mormon women’s magazine, “their options are to go without the sacrament or to invite someone who isn't part of their household into their home, which may go against public health guidelines.”

This emergency also “underscores the problem of barring girls from passing the sacrament in homes where there aren't teenage boys but there are girls,” she says. It is, though, a “great opportunity for the church to reconsider its position on banning women and girls from participating in these important ordinances.”

Hannah Rose Galliosborn and her husband, Kit, who live in Maryland, came up with an unusual way to give their newborn daughter “a name and a blessing,” a Latter-day Saint ritual typically conducted at church with a circle of men.

Earlier this month, Kit Galliosborn “blessed our little girl over video chat so our families could 'be there,'” Hannah writes in an email. “The circumstances made it so I was holding her during the blessing, which was meaningful to me.”

Though the mom is not permitted to hold her baby during an official Latter-day Saint blessing ceremony, in this extraordinary case it was unavoidable.

No one else was there.

END_OF_DOCUMENT_TOKEN_TO_BE_REPLACED 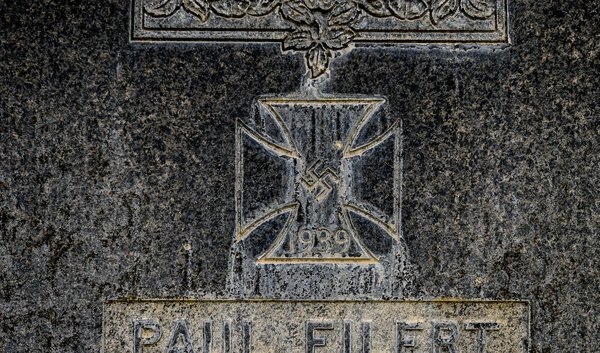 END_OF_DOCUMENT_TOKEN_TO_BE_REPLACED

Letter: Where police knelt with protesters, there was no violence
By L. Cameron Mosher | The Public Forum • 24m ago

Letter: The definition of terrorism
By Roger Christensen | The Public Forum • 25m ago
END_OF_DOCUMENT_TOKEN_TO_BE_REPLACED