Coronavirus poses challenge for Catholics, Latter-day Saints, other believers: How do you ‘have church’ when you can’t go to church?

Churches, temples, mosques, shrines and synagogues have been among the institutions shut down due to fear of spreading the coronavirus — which, in turn, has prompted spiritual leaders in China, Japan, South Korea, Singapore, the Philippines, Iran and even Italy to find pragmatic alternatives to centuries-old traditions and rituals for quarantined believers.

Most religious folks gather together for worship, rather than stay sequestered in their homes — and that’s by definition. After all, a Christian group is called a “congregation,” and one of the reasons for assembling is for “Communion,” which literally means sharing. Such ceremonies are meant to unite individuals in a common faith.

So how do you do Communion, the Eucharist, the sacrament — partaking of the bread and wine or water in remembrance of Jesus’ last supper — by yourself?

In other words, what is church without church?

This week, Pope Francis seemed unfazed by anxiety about catching the virus as he walked freely among the Catholic faithful for Ash Wednesday, the beginning of the Lenten season 40 days before Christianity’s holiest day, Easter.

“Francis and a long line of priests, bishops and cardinals processed through Rome’s Aventine Hill into the fifth-century Saint Sabina Basilica for the late-afternoon Mass,” Time magazine reported. “Neither the priests nor the faithful were wearing masks, and they all exchanged a sign of peace toward the end of the liturgy.”

The pontiff said he wanted to connect with those who had fallen ill.

Elsewhere in Italy, however, sacred buildings were locked down, including St. Mark’s Basilica in Venice, the magazine reported, “after a handful of elderly people in the lagoon city tested positive for the virus.”

Bishops throughout the country, which has seen the largest coronavirus outbreak in Europe, are requiring some dioceses not to perform the “sign of peace,” according to Religion News Service, “and to avoid the use of the holy water font in order to prevent contagion.”

The sign of peace is the part of the liturgy when people in the pews greet their neighbors. Priests assured them that fist bumps, elbow bumps and simple smiles would suffice, while encouraging parishioners not to give into hysteria over the virus.

“The biggest devastation of this event is to separate us and keep us away from one another,” Don Alessio Albertini, from the Diocese of Milan, told the news service. “In this moment we realize we depend on each other. ... We realize that we depend entirely — in sickness and in healing — on somebody else.”

That may be an even greater hardship in The Church of Jesus Christ of Latter-day Saints, where members serve various roles in the running of a ward (congregation), where the elements of the sacrament are passed down the row from person to person, and where congregants call one another “brother” and “sister’ as if in a giant extended family.

The first few weeks, members were encouraged to follow the “Come, Follow Me” scripture study guide on their own, Katie Wan explained. “The last two weeks we have met in small groups via Zoom [video conferencing], which can be accessed on computer or an app on a phone.”

The format was simple: Open with prayer, then one person leads a 20-minute discussion on the scriptural lesson for the week. “The Asia Area Presidency/our District Presidency has not authorized us to have the sacrament at home,” Wan said, “but hopefully they are coming up with a plan to handle that.”

The women’s Relief Society and male elders quorum send out weekly newsletters, WhatsApp messages and Facebook posts to congregants to share and gather information, she said. “We’ve also been asked to check on our ministering families and report back.”

Wan, president of the children’s Primary organization, has sent messages to the families in her care to check on their needs.

Living in China this year (and especially in the past six weeks) has made Maryan Shumway “appreciate ‘Come, Follow Me’ even more,” she said. “I see my home differently, perhaps, than I ever have before.”

Having the sacrament in the home for the past month with her family, Shumway said, “has helped me to understand my individual relationship with the Savior in new ways. I feel like I have a new lens to look through as I have experienced this time with the virus in China.”

‘Member bonding is a bit tougher’

So far, the Utah-based faith has reduced its Sunday services to one hour in Malaysia, rather than completely shut them down.

With only 60 minutes to meet and no weekday activities, said David Hotaru Chong in Petaling Jaya, Malaysia, “member bonding is a bit tougher.”

Only sacrament meeting and baptisms are allowed, Chong wrote in an email. “Missionary work relies solely on online video calls or just phone calls because the missionaries are quarantined.”

With the church’s “Come, Follow Me” curriculum, he said, “it has caused families to be closer than ever.”

Just this week, a Latter-day Saint area president in Asia discontinued services in Japan due to the virus and offered online instructions on what to do instead.

He urged members to “study the gospel” in their homes and to use social media to communicate with one another. He said to participate only in “prerecorded or live church services online or through church websites.”

Local lay leaders, the president wrote, should broadcast “a spiritually uplifting meeting” that includes music, prayers, messages and/or testimonies. “No ordinances (sacrament) may be recorded or broadcast through online resources.”

Those instructions already were in place in South Korea, said K.C. Kern, who serves as a counselor in his ward’s elders quorum in Gangnam.

“Last week was church-from-home,” Kern wrote in a Facebook message. “The stake president prerecorded a talk for everyone to watch at home during sacrament meeting time. The elders quorum was held via video conferencing.”

For the foreseeable future, members have been asked to hold “home-church on schedule,” he said, “with some recommended material to watch or cover during the meetings.”

Members generally “seem OK with it for now; it still has some novelty,” he said. “It remains to be seen if the video conference elders quorum will continue, or if each home will just cover material on their own.”

The forced isolation, Kern said, has “facilitated some things (like ministering) because it is easier to coordinate when everyone is online at the same time and their avatar is clickable.”

Long before the virus hit, Rachel Hunt Steenblik did church over Skype while she and her family lived in Wenzhou, about four hours south of Shanghai.

The couple and their three children — who hope to return to China — formed a tiny Latter-day Saint “twig,” as she put it, of a soon-to-be branch, with only a few other members.

At the beginning of the service, Steenblik recalled, there was an announcement, reminding members that they needed a priesthood holder (worthy male) to officiate on the sacrament and permission from the district leader.

If they didn’t have one, they were told just to “meditate” for eight minutes.

“The timer is set for eight minutes of silence,” she said, “where everyone is muted.”

The main service was just a Skype phone call, Steenblik said, but church organizations for teens used Zoom to video chat — and Relief Society began experimenting with Zoom as well.

“It's definitely hard to feel connected, even with the phone line,” she said. “Is it better than nothing? Yes. But it's still hard.”

It could be tough to hear the speakers and you didn’t know what they looked like.

Steenblik's favorite part, though, was that before someone prayed or spoke, they asked, "Can you hear me?"

And someone, probably from the branch presidency, replied, “We can hear you.”

END_OF_DOCUMENT_TOKEN_TO_BE_REPLACED 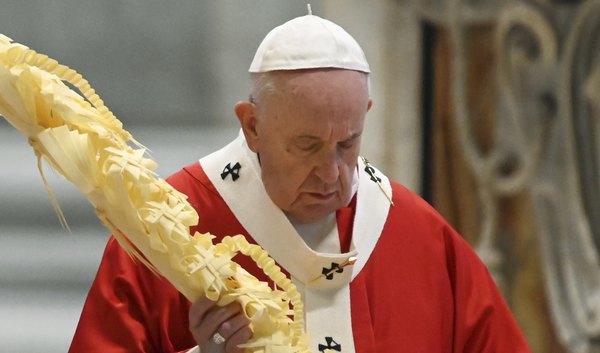 Palm Sunday: Pope Francis celebrates without the public in St. Peter’s
By Frances D’Emilio | The Associated Press • 21h ago

Robert Kirby: My wish list for LDS General Conference. Did it — will it — come true?
By Robert Kirby • 23h ago 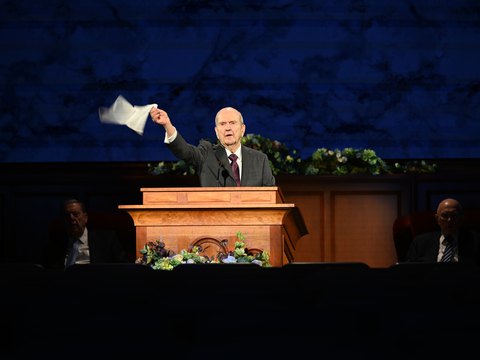 Robert Gehrke: An expert says Utah’s coronavirus peak may be months away. And that’s a good thing.
By Robert Gehrke • 50m ago

Utahns adjust to life during coronavirus, turning parts of their homes into offices
By Sean P. Means • 50m ago

Letter: When the health care bill comes due
By Douglas D. Reilly | The Public Forum • 51m ago