Commentary: Trump kept his promises. That’s why, as a Catholic, I want four more years.

On election night 2016, I went to bed sad but not surprised, after writing a short presentation for an academic panel on why I had supported what appeared then to be the failed campaign of Donald Trump for president.

While Trump was not my first (or even second or third) choice among the expansive field of Republican candidates, he promised to protect the unborn and religious liberty, in part by appointing judges who would interpret the Constitution according to the text and original intent.

His promises to create jobs and restore balance in many of our foreign trade agreements were a welcome contrast to our painfully slow return from the Great Recession that had destined many of my graduating law students to temporary work or finding jobs in other fields.

Having lived in Texas for several years, I welcomed Trump’s promises to create a system of orderly immigration, in part by building a wall — given the human trafficking and abuses by criminals operating across parts of our border that Texas papers regularly reported. His demand that we fix our porous border before negotiating the fate of people who entered the U.S. illegally made sense to me as someone who had actually supported Ronald Reagan’s 1986 Immigration and Reform Act.

As a new lawyer in the late ’80s, I had happily provided pro bono services to a woman who, after having entered the country illegally a decade earlier, qualified for amnesty. However, while the amnesty provisions were pursued enthusiastically, the act’s promises of tighter border security and strict employer penalties faded away. Given that experience, it seems quite sensible to pursue border security before discussing amnesty.

I believe that each of these positions was (and is) consistent with the teachings of the Catholic Church, notwithstanding the contrary position of individual bishops, priests and some laypersons.

The U.S. Conference of Catholic Bishops, in its 2015 “Forming Consciences for Faithful Citizenship: A Call to Political Responsibility from the Catholic Bishops of the United States,” identified “the ongoing destruction of over 1 million innocent human lives each year by abortion”; “the narrowing redefinition of religious freedom, which threatens both individual conscience and the freedom of the Church to serve”; and a “broken immigration system” as three of the several “threats” facing American society.

Candidate Donald Trump had identified these three things as threats as well and promised to work to limit or eliminate them.

Imagine my surprise and excited optimism the morning after the election when I learned that Trump would be president for the next four years. I hurriedly rewrote my remarks to be celebratory but muted, knowing that the vast majority of my colleagues at the university would be in mourning.

Had President Trump proved unfaithful to his promises to protect the unborn and religious liberty, I would consider voting for someone else. Had a significant number of his judicial nominees been unqualified or unsuitable, I would be looking at other candidates more closely. Had the president failed to seek an orderly and just system of legal immigration, I would have to look at others. In fact, the president has been faithful to his promises and delivered more than I hoped for when I voted for him in 2016.

He has publicly and repeatedly opposed abortion.

Guest review: Can a forgotten Mormon leader teach us something about Donald Trump today?

Jana Riess: White evangelicals didn’t hold their noses to vote for Trump. His toxic masculinity is what they’ve been defending for decades.

Trump declares places of worship ‘essential,’ setting up standoff with some governors

Commentary: How Mitt Romney and Nancy Pelosi used their faith to resist Trump

One of his first executive orders was an order reinstating and expanding the Mexico City policy prohibiting U.S. funding of foreign organizations that perform or actively promote abortion as a method of family planning. Under the president’s leadership, federal officials have publicly and effectively opposed attempts to create an international “human right” to abortion by prochoice activists. In an address to the U.N. General Assembly, the president explained: “We in America believe that every child — born and unborn — is a sacred gift from God.” He supports the passage of federal legislation that protects children born alive during abortion and prohibiting abortions obtained for discriminatory reasons.

His support of religious liberty is evident by his executive order on the subject, the resulting regulations issued by the U.S. Department of Labor and the positions the Department of Justice has taken in litigation. Two concrete outcomes of these actions are the current protection of conscience rights enjoyed by the Little Sisters of the Poor related to contraception distribution and, more generally, the newly established procedures for healthcare workers to enforce their federally protected rights of conscience related to abortion, sterilization and other procedures.

The president’s selection of judicial nominees has been thoughtful and informed by the standards of judicial independence. The circus surrounding Justice Brett Kavanaugh’s appointment merely reinforces the importance of the presidential power of appointment and the disproportionate power the Supreme Court wields on contemporary issues that divide the country. Absent the power of the Supreme Court to declare certain debates outside the political process, there would be little incentive to wage such bitter partisan war over appointments.

Both Justices Neil Gorsuch and Kavanaugh have largely proved to be faithful originalists when called to interpret the Constitution, although Gorsuch’s opinion purporting to interpret Title VII in Bostock v. Clayton County is troubling.

His importation of political views of 2020 regarding LGBT issues into language enacted in 1964 is strained and unpersuasive. The dissent of Justice Samuel Alito clearly has the better side of the argument, but at least the majority opinion did not constitutionalize the issue — unlike abortion and the definition of civil marriage.

Congress remains free to amend the law if it has the political will to do so.

The president’s leadership on economic issues led to record levels of employment, not only among workers generally, but also among blacks, Hispanics, women and youths before COVID-19 struck. His recent executive order extending federal assistance to states providing enhanced unemployment compensation and aid to small businesses and other organizations illustrates both his compassion and commitment to ensuring our economic foundations remain sound.

His general response to COVID-19 has been measured, deferential to state authority over public health and much stronger than the government’s 2009 response to another unknown virus, the H1N1 swine flu virus, that initially looked equally lethal and frightening — the World Health Organization called it a threat “to all humanity” at the time.

His leadership in criminal justice reform also weighs heavily in my decision to support the president in 2020. Under the First Step Act, which was strongly supported by the USCCB, thousands of prisoners sentenced before August 2010 for crack cocaine crimes will have the opportunity for a reduced penalty, and federal judges are given more freedom to focus on rehabilitation when sentencing drug offenders.

Yet his recent actions in the face of dangerous riots show that the president is not “soft on crime,” especially violent crime directed at federal officers and facilities.

As a Catholic who embraces the church’s teaching on the innate value of every human life, the primacy of faith, the dignity of work, the importance of public order and the need for mercy to temper justice, I am very comfortable supporting the reelection of our president.

Editor’s note • Teresa S. Collett is professor of law at the University of St. Thomas in St. Paul, Minn. The views expressed in this commentary are hers alone and do not necessarily reflect those of Religion News Service.

END_OF_DOCUMENT_TOKEN_TO_BE_REPLACED

Robert Kirby: When the mighty fall, you need not go with them
By Robert Kirby • 3d ago 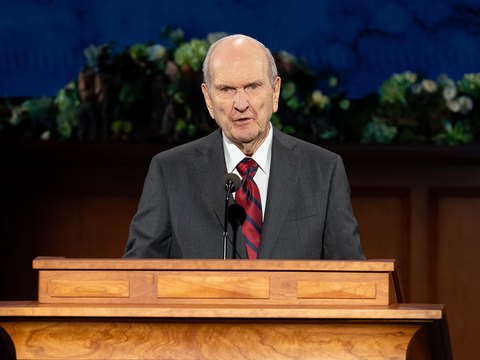 Utah football changes on the fly after Washington becomes the Utes’ next opponent
By Josh Newman • 30m ago
Letter: Some of us remember the Golden Rule
By LeRoy Uncles | The Public Forum • 6h ago