Trump declares places of worship ‘essential,’ setting up standoff with some governors

Washington • President Donald Trump has unveiled new guidance classifying houses of worship as “essential services” and insisting that governors allow faith groups to worship despite the risk of furthering the spread of the novel coronavirus.

Trump made the announcement Friday afternoon at a news conference at the White House and appeared to set up a potential standoff between his administration and governors who have halted worship services during the pandemic.

“Today I’m identifying houses of worship — churches, synagogues, and mosques — as essential places that provide essential services,” he said. “So I’m correcting this injustice in calling houses of worship essential. I call upon governors to allow our churches and places of worship to open right now. If there's any question, they're going to have to call me — but they're not going to be successful in that call.”

He added: “These are places that hold our society together and keep our people united. The people are demanding to go to church and synagogue, go to their mosque. Many millions of Americans embrace worship as an essential part of life. The ministers, pastors, rabbis, imams and other faith leaders will make sure that their congregations are safe as they gather and pray.”

The president said that if governors do not allow houses of worship to open, he will "override" them — but did not detail how he would do so.

Trump also said the Centers for Disease Control and Prevention would be issuing guidance for faith communities on how to open their doors for worship. According to The Washington Post, release of the guidance was initially delayed after the White House and CDC officials disagreed on whether to put restrictions on religious institutions, with the White House preferring fewer constraints.

According to Micah Schwartzman, director of the Karsh Center for Law and Democracy at the University of Virginia and an expert on the intersection of religion and law, the president's statement raises many questions.

"Without explaining the grounds of his authority, the president is intervening in state public health decisions in a manner that ignores the risks posed by large gatherings in churches and houses of worship," said Schwartzman, who also sits on the board of his local synagogue. "Tragically, there are many COVID clusters involving houses of worship, including some that have recently reopened. State and local officials may be sensitive to this in a way that, unfortunately, the president is not."

For their part, religious Americans remain split on the issue. According to a recent Democracy Fund + UCLA Nationscape survey conducted April 23-30, fewer than half (48%) of religiously affiliated Americans who attended services before the COVID-19 outbreak said they would definitely or probably attend religious services even if public health officials deemed it safe.

Latter-day Saint congregations in Utah can begin meeting again, but they must heed a number of rules

"I was pleased to hear President Trump affirm his stand for religious freedom and that churches are essential to the fabric of America," he said in a statement. "With pastors, church leaders, and church members adhering to proper social distancing practices, our churches should be permitted to open as soon as possible while doing so in a safe and responsible manner."

By contrast, Rachel Laser, president and CEO of Americans United for Separation of Church and State, decried the decision.

“President Trump’s demand that governors allow all houses of worship to reopen this weekend is irresponsible and reckless – and tragically, will lead to more deaths," she said. "Trump’s cynical pandering to his religious extremist base is putting the health and well-being of the American people in jeopardy."

The announcement comes in the wake of polarized faith-rooted activism on the topic of opening churches and businesses.

Some conservative Christian leaders in Louisiana and Florida have been arrested for refusing to close their doors during the pandemic in defiance of local recommendations or regulations. Meanwhile, progressive-leaning religious activists, such as the Rev. William Barber of the Poor People’s Campaign, have openly opposed reopening of churches and businesses, arguing that “these plans to reopen show no regard for human life."

END_OF_DOCUMENT_TOKEN_TO_BE_REPLACED 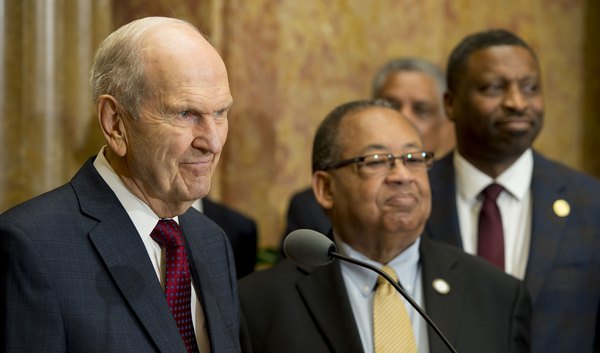 Some Utah LDS wards are resuming restricted Sunday services, but how they’re doing it varies
By Peggy Fletcher Stack • 4d ago
END_OF_DOCUMENT_TOKEN_TO_BE_REPLACED
L