For LGBTQ Latter-day Saints and their allies, it’s been a long 3½ years.

In November 2015, The Church of Jesus Christ of Latter-day Saints instituted a policy deeming same-sex married couples “apostates” and generally barring their children from baby blessings and baptisms.

Such harsh and restrictive rules triggered widespread protests and soul-searching. Hundreds, maybe more, resigned their church membership. Even believers felt wounded and betrayed. Families were torn. Tensions erupted. Some were disciplined by the church. Some died by suicide.

On Thursday, the Utah-based faith walked back all the hotly disputed elements. Church rituals for children now are OK, and LGBTQ couples are not labeled apostates. The shift comes after 41 months — by Mormon historical standards, an astonishingly rapid reversal.

“Absolutely true,” said historian Matthew Bowman, author of “The Mormon People: The Making of an American Faith.” “Generally, church policies are changed much more slowly and often, when they do change, there is not this sort of announcement.”

The speed of the about-face, Bowman added, “reflects the turbulence that this policy and its implementation created among members, as well as among bishops and stake presidents."

“Effective immediately, children of parents who identify themselves as lesbian, gay, bisexual or transgender may be baptized without First Presidency approval,” Oaks said, “if the custodial parents give permission for the baptism and understand both the doctrine that a baptized child will be taught and the covenants he or she will be expected to make.”

In addition, same-sex Latter-day Saint parents no longer will be seen as “apostates.”

“Previously, our Handbook characterized same-gender marriage by a member as apostasy,” Oaks said. “While we still consider such a marriage to be a serious transgression, it will not be treated as apostasy for purposes of church discipline. Instead, the immoral conduct in heterosexual or homosexual relationships will be treated in the same way.”

In addition, officials said, the revamped policy clears the way for babies of such couples to be “blessed” in a traditional church ceremony.

“A nonmember parent or parents (including LGBT parents) can request that their baby be blessed by a worthy Melchizedek Priesthood holder,” Oaks said. “These parents need to understand that congregation members will contact them periodically, and that when the child who has been blessed reaches 8 years of age, a church member will contact them and propose that the child be baptized.”

These new “very positive” policies should help “affected families,” Oaks told attendees, and “ … church members’ efforts to show more understanding, compassion and love should increase respect and understanding among all people of goodwill.”

The church wants “to reduce the hate and contention so common today,” he said. “We are optimistic that a majority of people — whatever their beliefs and orientations — long for better understanding and less contentious communications. That is surely our desire, and we seek the help of our members and others to attain it.”

Back to the future

It marked a significant and stunning departure from the recent past.

After all, it was Nelson — then the church’s senior apostle — who declared in January 2016 that the now-abandoned policy came as a revelation from God to his immediate predecessor, church President Thomas S. Monson, who died in January 2018.

In explaining the unexpected turnaround, Nelson said in a news release that the Lord leads the church “revelation upon revelation.”

“We need the Lord’s direction to meet changing circumstances,” Eyring said in the release, “and he has guided changes in practice and policy throughout the history of the church.”

The First Presidency said the policy changes come “after an extended period of counseling with our brethren in the Quorum of the Twelve Apostles and after fervent, united prayer to understand the will of the Lord on these matters.”

Oaks reiterated the church is not revising its doctrine on homosexuality, which teaches that having same-sex attraction is not a sin, but acting on it is.

“These changes do not represent a shift in church doctrine related to marriage or the commandments of God in regard to chastity and morality,” the release said. “The doctrine of the plan of salvation and the importance of chastity will not change.”

News of the church’s move exploded across and beyond the Latter-day Saint scene.

“My phone has been buzzing nonstop, and I’m getting messages and calls from my gay friends, active and excommunicated, sobbing,” said Calvin Burke, a gay student at church-owned Brigham Young University. “I’ve been jumping up and down for joy on the BYU campus. Everything feels lighter today; the sense of revelation, the sense of hope for LGBTQ Latter-day Saints is in the air. There hasn’t been a lot of concrete reason for that hope before today; now things seem so much closer. It’s like that glow before the dawn of a new day.”

These steps may be small, Burke said, but are “important and deeply symbolic.”

The announcement “hints that the church is inviting conversation and seeking further light and knowledge,” he said. “It seems to represent the beginning of a new relationship between the church and the LGBTQ community.”

When the 2015 policy came to light, Richard Ostler was a lay bishop to a Latter-day Saint congregation in Magna of single adults, some of whom were gay.

That led to a “mini-faith crisis,” Ostler wrote in an email. “I was never able to gain a testimony of the policy, even though I continued to sustain our church leaders and to do everything I could to bring people to Christ.”

On Thursday, Ostler was among those who celebrated the church’s new stance.

“Allowing children of LGBTQ parents to be baptized with simply the parents’ consent puts the responsibility on the parents to make decisions for their children,” he said. “I am also pleased that same-sex marriage will no longer be considered apostasy but will be treated as other serious transgressions related to living the law of chastity. I believe this is the right message to members of the church to not single out those in same-sex marriages.”

Tom Christofferson, gay brother of Latter-day Saint apostle D. Todd Christopher, praised the move for “taking away some of the heartache for gay parents” and dropping the “apostasy” nomenclature.

“Effectively, we’re in the same place we were in before the November 2015 policy,” said Christofferson, author of “That We May Be One: A Gay Mormon’s Perspective on Faith & Family.” “My great hope and prayer is that congregations of The Church of Jesus Christ of Latter-day Saints will use this as encouragement to do more to love and welcome their LGBTQ brothers and sisters into their midst, to create a place of acceptance and appreciation for the gifts they bring.”

Others had mixed reactions.

“So many of us who are LGBTQ advocates, and work for suicide prevention, have hoped and pled for this since the policy was leaked,” said Jody England Hansen, a member of the Mama Dragons support group for parents and family of LGBTQ members. “We are thrilled. When we heard the news this morning, we were crying and hugging each other but, at the same time, remembering all the LGBT members we saw being excommunicated and dying by suicide because of the [2015] policy.”

Hansen, who also is on the Utah Suicide Prevention Coalition, still mourns “the many who are no longer with us. We are still attending funerals and trying to offer hope to many who feel rejected.”

Boston resident Kristine Haglund, who has seen family members leave the church because of the policy, was even blunter.

“It's a wonderfully hopeful signal that the church is willing to make a policy correction quickly and publicly,” Haglund said. “Many members have the experience of personal revelation letting them know such corrections are necessary; it’s easy to understand that revelation could work that way for the church itself.”

As the “pace of change in our culture quickens, the church will have to be nimble and responsive,” Haglund said, “and this step seems to suggest new mechanisms for revelatory change.”

She would, however, like to see the church “recognize that in the past 3½ years, far too many people and families have been devastated by this policy,” said the former editor of “Dialogue: A Journal of Mormon Thought.” “It is important to acknowledge their suffering, to continue to mourn with and for these Saints, particularly if no official apology is forthcoming.”

For her part, Blaire Ostler, a self-described “queer Mormon sister,” believes that “queer folks who have been excommunicated and/or disciplined for LGBTQ+ issues should have their excommunication repealed and issued a full reinstatement.”

Ostler, who is not related to Richard Ostler, further argues that “the children who had to have their [planned] baby blessings and baptisms canceled should be issued an apology … and that the brethren, as stewards of the church, should apologize to the children affected.”

Her advice to Latter-day Saints?

“We need to learn to live in the paradoxical state of weeping and rejoicing,” Ostler wrote, referring to the biblical verse in Romans 12:15. “You are allowed to feel anger, frustration, joy, elation, pain, sorrow, hope, skepticism, faith and forgiveness. I am feeling all these emotions at this very moment, and they are not mutually exclusive.”

Members should cheer this “drop in the bucket,” Ostler said, “because that’s how buckets get filled.”

END_OF_DOCUMENT_TOKEN_TO_BE_REPLACED 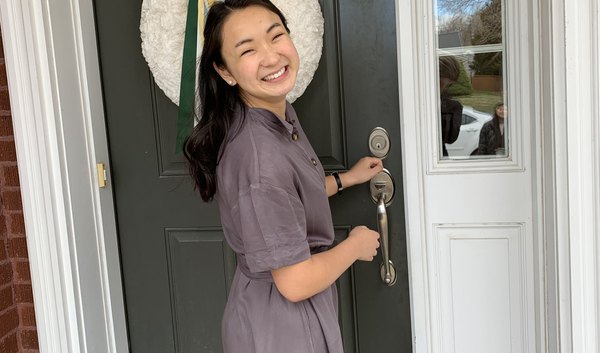 When the MTC is your bedroom: Hundreds of Latter-day Saints are starting their missions at home
By Peggy Fletcher Stack • 1d ago Gordon Monson: Time to hold onto the iron rod — as long as it’s been disinfected with Clorox wipes
By Gordon Monson • 1d ago