On Sunday, as we were leaving church, my neighbor’s 14-year-old son, Ryan, asked his mother if he could drive home. It’s only a matter of a few blocks between our houses and the Lord’s, but Mom was nevertheless nervous.

“I don’t know,” she said. “Maybe if Ethan rides home with Kirby, it will be safer.”

The idea here was that Ryan, who doesn’t have a license, might get into an accident and jeopardize the well-being of his 11-year-old brother. It seemed a bit overprotective, but what do I know about the concerns of a mother?

Ryan was elated. He was going to get to drive. His mom was grateful because Ethan wouldn’t get hurt if something went awry.

Ethan and I waited until Ryan and his mother were gone, then I tossed the keys to him and said, “Let’s drift, Tokyo.”

Ethan didn’t even blink. We’re on the same maturity level, so he snatched the keys and jumped in. He had to move the seat all the way forward so his feet could reach the pedals, readjust the mirrors so he could see, and then put on his seat belt.

The rearrangement would have suited a small monkey just fine, but then a monkey wouldn’t have remembered to check both ways before dropping the car into gear and pulling onto the street.

Note: Yeah, this was all terribly illegal. It could have ended in a crash. Call the cops. I can’t vouch for Ethan, but I’ll surrender peacefully.

Nobody got killed or even had their feelings hurt by Ethan’s driving. The only instruction I offered was, “Remember to signal when you turn.”

Despite his youth and inexperience, Ethan turned out to be an excellent driver. Had the ride been longer, I might have taken a nap. When we finally pulled up at his house, he thanked me and went inside and told his mom that we broke the law.

Kirby: Today is a mother of a day. Say thanks.

Text from Ethan’s mom • “He was SO excited you let him drive. And I said, ‘My mistake for thinking you going with Kirby was the safer option.’”

My return text • “Duh. What kind of mother are you?”

Hey, I wouldn’t have let just any kid drive. But Ethan is well-mannered, wears a tie to church, and turned me down flat when I tried to give him $20 and a knife to stab the bishop in the leg while he was passing the sacrament.

I was 10 when I first drove, and then I only started the car, put it in gear, backed out of the driveway — and into the neighbor’s fence, mailbox and lilac bushes.

The Old Man wanted to deck me, but the neighbor said it was OK. He’d started driving a tractor when he was 8 and then backed over two of his mother’s chickens.

“Nobody got hurt this time,” the neighbor said. “That’s the main thing.”

He’s right. The entire point of driving is to get where you’re going without hurting anyone. In Sunday’s case, the only thing that suffered was the trust of Ethan’s mom. Ethan and I can live with that.

END_OF_DOCUMENT_TOKEN_TO_BE_REPLACED

Robert Kirby: Road rage in a season of unreason
By Robert Kirby • May 15

Robert Kirby: It could be worse. We could be stuck watching nonstop Election ’20 coverage.
By Robert Kirby • May 12 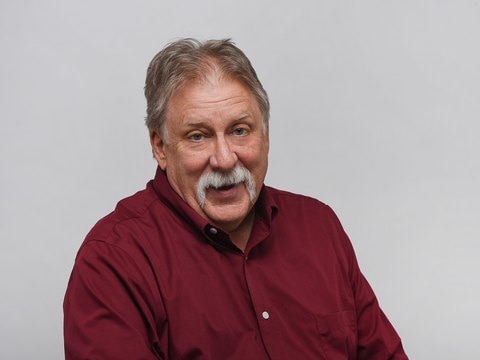 Robert Kirby: Happy Mother’s Day to all the ‘moms’ I’ve had
By Robert Kirby • May 10
END_OF_DOCUMENT_TOKEN_TO_BE_REPLACED
L

Trump’s pitch to voters: Trust me, economy will soar in 2021
By Jill Colvin and Zeke Miller | The Associated Press • 2h ago