This week, my husband and I took our grandchildren up American Fork Canyon, leaving right after breakfast and not returning until dark. We roasted hot dogs and S’mores, had 7-Up chicken, dutch oven rolls and peach cobbler for dinner but the best part, in their eyes, was the many hours spent wading in the stream and tossing rocks, over and over and over.

There were two best parts for me: making memories with my grandkids and coming home to find several of my dearest friends standing in the driveway. At first, I could not figure out why they were there and then it dawned on me.

They were! Worried because I had not answered my phone all day, they physically drove to my home to make sure we hadn’t all been overcome by carbon monoxide poisoning — or worse.

For at least the last couple of decades, there is a growing body of research on the value of strong female friendships. Shelley E. Taylor, a professor of psychology, wrote a book in 2002 called “The Tending Instinct” that looks at “women, men, and the biology of our relationships.” Women’s need for community is, Taylor argues, part of our DNA. We tend to be more social, more community focused, more collaborative and less competitive.

Here are some research findings from multiple fields:

Women under stress have a different response than the classic “fight or flight” response, a response seen when stress tests only used male participants. When women were (finally) included in the testing, a “new” response emerged, something Taylor called “tend and befriend.” Under stress, women “tend” to their children and turn to their girlfriends, which in turn, reduces all biological markers of stress.

Research in 2013 by Comaz-Diaz and Weiner reiterated that happiness is contagious among women and that strong female friendships “enhance women’s self-esteem, connectedness and enjoyment,” leading to a sense of well-being and even healing. Said another way, strong friendships get us through the rough times and make us happier.

They also make us healthier. Women with strong social ties smoke less, are less overweight and have less cognitive decline in their later years. Additionally, those friendship ties impact women’s longevity even more than marriage. We’ve known for years that married men live longer than single men — but married women have the same life expectancy as single women. Those women with strong friendships, however, live longer than women without those strong ties.

As you might have realized from your own life, friendships wax and wane. Life circumstances change, as do our points of connectedness and skill at communication. True confession: I don’t even remember the names of all of my bridesmaids from my wedding 34 years ago, even though they were women who were important to me then. And, that’s totally normal.

Holly Richardson: It’s time for Rosie the Riveter to get her medal

Holly Richardson: The lessons of 1918. Will we learn them?

Holly Richardson: Independence Day in the time of a pandemic

Many people can be in the “friend” category, even the “good friend” category and I have been blessed by many friends. The strongest friendships, however, are also the least frequent. Some estimate six over a lifetime, although that seems low to me. Once you do develop those friendships, you can expect those relationships to last a while: on average 16 years until you hit your mid-50s and then you can expect 23 years of friendship. Sounds like a plan!

These strong friendships don’t come about because they are always at the top of the priority pyramid - in fact, they’re often at the bottom, after spouses, children, parents and even work relationships. But, they grow, like all strong ties, through good communication, unconditional support and service, through difficult conversations that call you on your crap and on being there for you when you really need it.

Or when they think you need it, like driving for more than an hour to make sure you didn’t die of carbon monoxide poisoning.

Holly Richardson, a regular contributor to The Salt Lake Tribune, is grateful for friends who make her laugh, cry and who bring out the best in her. She saw an Internet meme once that defined her strong friendships perfectly “I’m pretty sure we are more than best friends. We are like a really small gang.”

END_OF_DOCUMENT_TOKEN_TO_BE_REPLACED 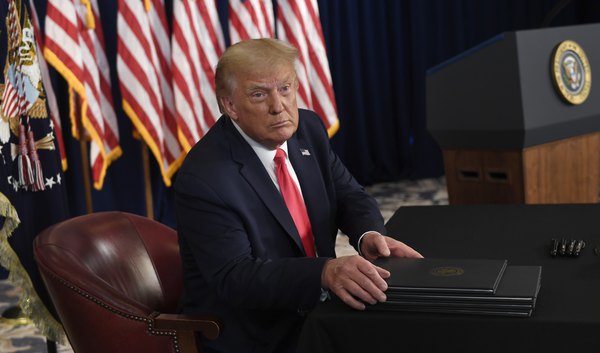 Trump abruptly escorted from briefing after shooting near White House
By Colleen Long, Michael Balsamo and Jonathan Lemire | The Associated Press • 43m ago