‘Four Women’ do all the ‘Talking’ in new play ‘About the Man Under the Sheet.’ (It’s the body of abolitionist Frederick Douglass.)

Editor’s note • Because of the spread of the coronavirus, Salt Lake Acting Company’s production of “Four Women Talking About the Man Under the Sheet” has been postponed. According to a SLAC spokesman, the play will be presented in May or July, depending on the actors’ schedules: “We believe in this play so much and want to give it the audience it deserves.”

The body of the character is onstage throughout the 80-minute production of “Four Women Talking About the Man Under the Sheet.”

“I’ve never done anything like that before,” Jarvik said with a laugh.

The inspired-by-a-true-story play takes place on Feb. 21, 1895, at Cedar Hills, Douglass’ home in Washington, D.C. — the day after he died at the age of 77. His widow, Helen, receives an unexpected visit from women’s suffrage leader Susan B. Anthony.

“It really happened that she showed up at the door of the second Mrs. Douglass. And she went there to comfort her,” Jarvik said. “And, apparently, in real life she stayed for a couple of days.”

It’s an awkward and often amusing encounter. Despite the sobering presence of the “Man Under the Sheet,” there are laugh-out-loud moments.

But this is by no means a comedy. Susan and Frederick had a falling out before his death, and Susan feels guilty. “They had a friendship, but it was complicated,” Jarvik said.

Frederick’s daughter, Rosetta, who arrives next, is hostile to her father’s widow, a white woman; she bitterly opposed their marriage. Susan and the character of suffragist Elizabeth Cady Stanton harbor old resentments, as well.

“Four Women” is a play that centers on feminism, race and regrets. It’ll teach you something about history without feeling like a history lesson.

Jarvik took the bare fact of the condolence call and “made up the rest.” There’s no evidence Rosetta joined Helen and Susan at the Douglass home that day, and the dialogue is invented.

But the events the characters talk about actually happened.

“I thought, if I’m writing a play about a historical character, I want to be completely accurate. I do not want to say things that are wrong or that would hurt that person if they were alive,” Jarvik said.

“On the other hand, I wanted to create a character. So I just decided [Susan] would be slightly bumbling. Because I think she would have been trying really hard to make Mrs. Douglass feel better. But if she was feeling guilty, she would just be trying too hard.”

And not only are there parallels to today, but there’s a twist that makes that even more pronounced. (No spoilers here, however.)

Over the past couple of years, “Four Women” grew out of something almost entirely different. Jarvik was a longtime reporter at the Deseret News whose first play was produced in 2008, and her previous works include include “The Coming Ice Age,” “(a man enters)” and “RIVER.SWAMP.CAVE.MOUNTAIN.” But she not only came close to giving up on this play, she said — she considered giving up on writing plays altogether.

In the summer of 2018, a historian friend of Jarvik’s had an idea after a reading of Jarvik’s last play, “An Evening with Two Awful Men” — which featured President James Buchanan, assassin John Wilkes Booth and abolitionist Harriet Tubman.

The year 2020 marks the 150th anniversary of the first vote cast by a Utah woman — which was also the first cast by an American woman under a universal suffrage law — and the centennial of national suffrage under the 19th Amendment. The friend suggested Jarvik write a play timed to the anniversaries.

“She said, ‘Well, maybe you ought to write a play about Susan B. Anthony’s friendship with Mormon suffragists.’ So that’s kind of how it all started.”

Jarvik read “dozens” of books about “suffrage and Mormon suffragists and Mormon women and polygamy and national suffragists and Susan B. Anthony and Elizabeth Cady Stanton. Then I tried to write this sweeping tale that covered maybe 50 years of history, and I could tell it wasn’t really working.”

So she talked to her friend Tim Slover, the head of the playwriting program at the University of Utah.

“I explained my meandering plot,” Jarvik said. “And he very kindly said, ‘You know, writing a play that covers so much history is like skimming a stone across a lake. You get all these tiny ripples.’ And I thought, ‘Well, that sounds nice.’

So, Jarvik said, she decided it was hopeless.

“I just said, ‘I’m not writing this play at all. I’m not going to write any more plays. I’m going to take up some other hobby — cross-stitching or something,’” she joked. “But I couldn’t quite let it go.

“I kept thinking of this one line in all those dozens of books I’d read about the morning of Feb. 21, 1895, when Susan B. Anthony showed up at the door of Mrs. Frederick Douglass. And that’s how the whole thing came to be.”

Through a series of rewrites along the way, she “pretty much gave up the whole Utah connection,” although several references to “Mormons” remain.

In real life, Anthony was harshly criticized by some suffragists because she supported women in Utah — seen as affiliating the movement with polygamy.

“It’s always somebody I hurt, somebody I have to keep happy, some fragile somebody,” Susan laments in the play. “If I accept Mormon women, will it offend the Women’s Christian Temperance Union? Will Mormon women make everyone in the country so angry that they …”

“It was your choice to get all mixed up with the Mormons,” Rosetta interjects.

“They had the vote!” Susan replies. “I wanted everyone to see that Utah women voted and the world didn’t fall apart.”

Before Utah women began voting in 1870, some East Coast leaders had assumed the territory’s women would vote against leaders of The Church of Jesus Christ of Latter-day Saints and end plural marriage.

But Latter-day Saint women saw suffrage as a way to help defend polygamy and counter a national perception that they were oppressed, historians say. Congress stripped Utah women of suffrage in 1887, years before Douglass’ death; they regained the right to vote when Utah became a state in 1896.

So while suffrage didn’t disappear from Jarvik’s play, “it’s not the main point,” she said. “Now it’s more about a connection between feminism and race.”

And about that one morning in one house in the nation’s capital in 1895.

“That’s very concrete — one morning that I can focus on. And have something important happen in that one morning instead of going 50 years of history,” Jarvik said with a laugh. “So in a way, it was just easier, I guess. And I’m a very concrete kind of person when I write.”

END_OF_DOCUMENT_TOKEN_TO_BE_REPLACED 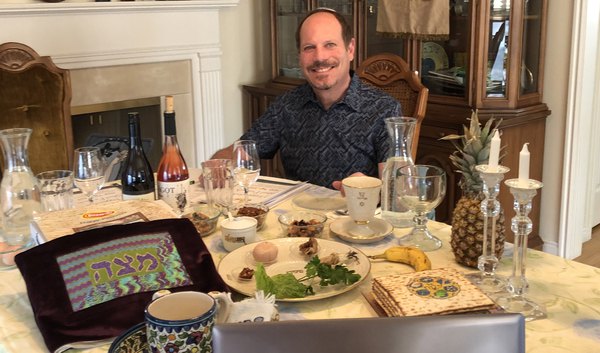