Utah is No. 8 in the first College Football Playoff rankings, with the NY6 games in view

Utah is ranked a program-best No. 8 in the first College Football Playoff Top 25 of the season, giving the Utes genuine hope of at least playing in a New Year's Six game.

Oregon, Utah's potential opponent in the Pac-12 championship game next month, is No. 7 in the rankings, released Tuesday night. Having those teams ranked ahead of No. 9 Oklahoma is a significant development for the Pac-12 at this stage.

To make the four-team Playoff, the Utes and Ducks would have to hope for only mild turmoil among the top six of Ohio State, LSU, Alabama, Penn State, Clemson and Georgia.

Utah coach Kyle Whittingham won't worry too much about the rankings at this point, but he likes having his program in the national conversation. “Sure, absolutely; what are we, nine games in? … To be able to be in a position where we still have a lot of positive things going on, that's a good situation,” he said Monday.

In a statement Tuesday night, Whittingham said, “It’s nice for our players to be recognized for what they’ve accomplished so far this season, but this team completely understands there is still a lot of football left and more work to be done.”

Utah's previous highest CFP ranking was No. 10 in November 2015, when the Utes were 8-1 before losing 37-30 in double overtime at Arizona.

At some point, the Utes' nonconference schedule of BYU, Northern Illinois and FCS member Idaho State could work against them in a CFP context. Those schools have a combined 10-16 record. “The strength of [any team's] opponents is important,” Oregon athletic director Rob Mullens, the CFP chair, told ESPN.

This week's ranking does create New Year's Six possibilities for the Utes, though, aside from qualifying for the Rose Bowl as the Pac-12 champion. A breakdown:

• The Utes can assure themselves of a Rose Bowl berth if they win their last three regular-season games, against UCLA, Arizona and Colorado — plus the Pac-12 championship game, presumably against Oregon on Dec. 6 in Santa Clara, Calif.

Gordon Monson: You want to see history made? The 2019 Utah Utes are making it.

Utah (8-1, 5-1 Pac-12) has a one-game lead over USC and UCLA in the Pac-12 South. USC owns a tiebreaker over Utah and UCLA could earn that advantage by beating the Utes next week at Rice-Eccles Stadium.

• As for the College Football Playoff, Utah and Oregon need each other to make it to Levi’s Stadium, creating a matchup of highly ranked teams that would enhance the winner’s credentials. If the Pac-12 champion is 12-1, that may be worth a CFP semifinal bid, depending on the rest of the landscape.

• In turn, that could create fallback potential for Utah (or Oregon) in New Year’s Six games. If the Pac-12 has a Playoff qualifier, the next-highest team in the final CFP rankings would become the conference’s replacement in the Rose Bowl. Utah conceivably could fill that spot, even without playing in the Pac-12 title game.

The Cotton Bowl in Arlington, Texas, is another possibility for Utah on the New Year's Six menu, if Oregon goes to the Rose Bowl as the Pac-12 champion. Once the Sugar, Orange and Rose Bowls are filled via conference tie-ins, the Cotton Bowl will be awarded the highest-ranked team remaining in the CFP as an at-large contestant. Last season, for example, No. 11 LSU filled the at-large spot in the Fiesta Bowl. Baylor, Notre Dame and Florida also are viewed as possible contenders for that bid.

The highest-ranked champion of a Group of Five conference will earn the other berth in the Cotton Bowl. Right now, that would be No. 20 Cincinnati, but No. 21 Memphis, No. 22 Boise State, No. 24 Navy and No. 25 SMU all are in the picture.

If the Utes fall below the New Year’s Six level, they almost certainly would play in the Alamo Bowl in San Antonio against a Big 12 opponent.

END_OF_DOCUMENT_TOKEN_TO_BE_REPLACED 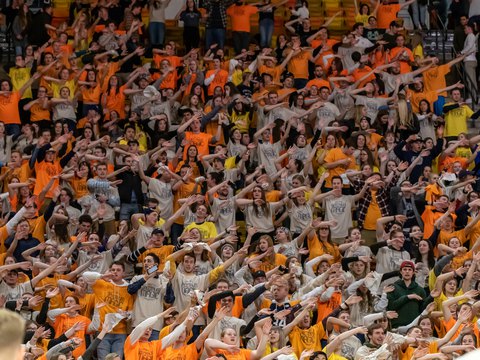 Utah gymnasts’ reward after big win over UCLA: They fall behind the Bruins in the rankings
By Lya Wodraska | Special to The Tribune • 22h ago
END_OF_DOCUMENT_TOKEN_TO_BE_REPLACED
L

Health officials warn of coronavirus outbreaks in the U.S.
By Pam Belluck and Noah Weiland | The New York Times • 10m ago