Ute offensive lineman Darrin Paulo, possessing an economics degree, is enrolled only in bowling and billiards.

In their own ways, both players' fall-semester workloads illustrate how No. 11 Utah may be the most educated college football team in the country. When the Utes play in a bowl game in December or January, they expect to have nearly two dozen players with undergraduate degrees.

That total is explained by an unusually large senior class, four graduate transfers from other schools and a program culture that makes degree completion in December of an athlete’s senior year the expectation.

“It's a new day in intercollegiate athletics,” said Ute athletic director Mark Harlan. The NCAA's Academic Progress Rating was “the game-changer,” he said, requiring checkpoints of moving toward a degree.

In Utah's football program, “It's not uncool to be a student,” coach Kyle Whittingham said.

“We emphasize it,” Whittingham added. “Usually, what you emphasize, you get. We harp on it and preach it, and we have an outstanding academic support team.”

Whittingham’s new contract has provisions for up to $150,000 in bonuses, based on the players’ academic performance. That’s only about 4 percent of his salary, yet it represents more money than he would get for winning the Pac-12 South championship.

Whittingham proudly mentioned his program’s 95-percent graduation rate in a 2018 Holiday Bowl news conference with coach Pat Fitzgerald of Northwestern, an elite school (Fitzgerald topped him at 99 percent). Such information plays well with donors and parents of recruits.

Utah’s Kyle Whittingham will reunite with Idaho State, where it all started.

With football scholarships extended through the summers, she said, graduating in 3½ years “should be your goal. ... Our biggest thing is that they leave here with a usable degree."

Other football programs also are benefitting from Utah’s culture, with graduate transfers excelling on the field at Utah State (Siaosi Mariner, Caleb Repp and Nick Heninger) and Texas Tech (Armand Shyne). In a Salt Lake Tribune interview in August, the three USU players thanked Utah’s academic staff for helping them graduate and move on.

It works both ways. Strauch is one of four graduate transfers on Utah’s roster, having come from UCLA to fulfill the life’s plan he wrote in the second grade: “I want to go to college for five years and make sure I get two degrees.”

Paulo's class schedule sounds like a retiree's lifestyle. It's a product of four years (including a redshirt season) of classwork that produced degrees in economics and sociology, positioning him to do just enough this semester to stay eligible for a bowl game. The commitment of the athletic department and the coaching staff to academic support means “you have to try to fail,” Paulo said. “You can't fail; there's really no way, unless you don't care.”

Ute defensive lineman John Penisini and cornerback Josh Nurse also have degrees, after coming from junior colleges, while 16 other players are scheduled to graduate in December. Those athletes have varying amounts of classwork remaining, after being allowed to go through commencement in May.

Excited to see what’s next for the Hallandale trio 🎓🙌 pic.twitter.com/wdOhfZCIxk

Chris Uchacz, Utah's newly hired senior associate AD for academic services, endorses a schedule that enables players to focus more on football in their final semester, after three-plus years of accelerated progress toward a degree. “The carrot is there,” Uchacz said. “They're going to graduate.”

Whittingham's “goal is to graduate everyone who comes through this program,” Uchacz added. “You don't see that everywhere. With his longevity here, he's built that culture of graduation.”

If that means taking bowling and billiards after graduating, as in Paulo’s case, that’s OK — even if his skills remain lacking, three weeks into the semester. Asked if he’s proficient in those sports, Paulo said, “I wish I could say yeah, but I’d be lying.”

Paulo acknowledged the demanding economics major “drained me,” so his current pursuits are “basically like a reward.”

Ute corner and grad student Josh Nurse on how he hopes to use another degree. pic.twitter.com/3zALryNhXr

Nurse and Penisini, though, are trying to maximize their last year on scholarship. Nurse is in the same master’s program as Strauch. “I figured, why not? You’re on scholarship and it’s paid for; work toward something new, don’t just get complacent [or] just be here to play football,” Nurse said.

Penisini intends to add a degree in consumer science and financial planning. “I figured out that's what I wanted to do,” he said. “I wanted that on my resume.”

As grad transfers, Strauch and three other players — offensive lineman Noah Reneau-Myers and Alex Locklear and tight end Hunter Thedford — must pursue master’s degrees. Strauch is a non-scholarship athlete, so he’s paying for graduate classes alongside professionals whose experience leaves him “a few years behind,” he said.

Having mother as a Bay Area realtor helps, though. He's enjoying a program that's “obviously, one of the main things I was looking for when I was transferring,” said Strauch, who has become Utah's kickoff specialist.

Paulo chose an economics major mainly as “something challenging,” in addition to the sociology degree that he plans to use in a law enforcement career. So when he’s finished with football, the phrase “economy of scale” will take on a new meaning for him. The 315-pound lineman recognizes that to become a police offer, he’ll have to lose weight.

END_OF_DOCUMENT_TOKEN_TO_BE_REPLACED

Frei, Vega stand out as Seattle and San Jose play to 0-0 draw
By The Associated Press • 1d ago
END_OF_DOCUMENT_TOKEN_TO_BE_REPLACED
L 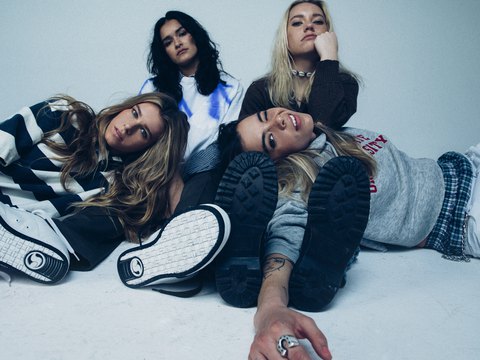 Indie-pop band The Aces talk about life between Utah and L.A., and their second album, ‘Under My Influence’
By Sean P. Means • 4h ago