Report: NBA is targeting a July 31 return to action, but has not yet settled on a format

It appears that the NBA now has a date in mind for a return to action from its coronavirus-necessitated shutdown. What it apparently doesn’t have yet is a concrete plan as to how exactly that will happen.

The Athletic reported that commissioner Adam Silver told the league’s Board of Governors on Friday that he is targeting July 31 as the date when teams will begin play again.

The NBA has been on hiatus since shutting down on the evening of March 11, when Utah Jazz center Rudy Gobert became the first player in the league to test positive for COVID-19.

However, multiple reports indicated that Silver and the league office have not yet settled upon a precise format for players’ and teams’ return, and that multiple options remain under consideration.

A week ago, the league set out a survey to teams’ general managers, attempting to gauge their feelings on myriad issues related to a potential return. ESPN reported that, after several months of considering “bad options,” four formats were presented, and that the option to simply skip the remainder of the regular season and proceed directly to the playoffs — with traditional seeding being decided by how the standings were when frozen in place March 12 — was the clear choice, earning 16 votes from among the 30 GMs.

ESPN noted that option received more votes than the other three options combined, namely: resuming the season with all 30 teams, followed by a play-in tournament (eight votes); going straight to the playoffs, and organizing either a World Cup-style group-stage format or a play-in tournament (five votes); and resuming the regular season with all 30 teams and then proceeding to the playoffs (one vote).

The Athletic, however, pointed out that Silver has not yet necessarily decided that the 16-team strategy will be the course of action.

Indeed, it reported that Silver brought up four potential competition scenarios in Friday’s conference call: 16 teams, proceeding directly to the playoffs; 20 teams, in a group-stage format; 22 teams, with additional games to determine seeding and a play-in tournament to settle the lower seeds; and all 30 teams, concluding a uniform 72-game regular season, followed by a play-in tourney.

ESPN further clarified that the 22-team option was presented as a means of including all teams that are within six games of a playoff spot.


• Proceeding directly to a 16-team playoff has the most support from league GMs.


• Commissioner Adam Silver is also considering options that would include either 20, 22, or all 30 teams.


• Format options under consideration include going straight to a 16-team playoff structure; going directly to a World Cup-style group-stage postseason structure; playing some regular-season games to establish higher seeding, followed by a play-in tournament to settle the final seeds.


• If a 16-team playoff occurs, there is support for a 1-16 conference-less seeding format.

Portland Trail Blazers guard Damian Lillard, most notably, went public days ago with a stated refusal to return to play in games if there was no shot at qualifying for the postseason. The Blazers currently sit ninth in the Western Conference — 3.5 games back of Memphis, and effectively tied with New Orleans and Sacramento.

Michael Jordan’s ‘Last Dance’ was also the last chance for the Utah Jazz, who have never gotten closer to a title

Both The Athletic and ESPN reported several other details regarding the results of the GMs’ survey. Among them, GMs favor expanding playoff rosters by two additional players, with many arguing for the inclusion of teams’ two-way players (who split the season between the NBA and the G League) to fill those spots; if the league settles upon a 16-team playoff format, 16 GMs prefer the league seed the participating teams 1-16, eschewing conference affiliation, while 14 argued for the traditional 1-8 East/West format; and if there are to be more regular-season games played before advancing to the playoffs, 18 GMs voted for the option of teams reaching the 72-game threshold — meaning all 30 teams would play five to nine more games apiece.

Regarding the latter, however, The Athletic reported Hornets owner Michael Jordan “advocated on the call for player safety, and not simply having players return for meaningless games.” Given such a stance, in combination with the NBA’s stated commitment to prioritize health and safety, it is apparently considered “unlikely” that all 30 teams will return.

One option that seemed to be gaining traction in recent days among pundits and observers is the World Cup-style group play option. For those unfamiliar with the parameters, it would essentially entail bringing back the 20 teams with the best records as of March 12, giving four apiece a 1-5 seeding designation, and then randomly assigning one of each seeded numbers to four groups.

Each team would then play its fellow group members two times apiece, and after those eight games, the two teams with the best record per group would then qualify for an eight-team playoff — effectively, the same postseason benchmark as the conference semifinals — at which point, best-of-seven series would commence.

END_OF_DOCUMENT_TOKEN_TO_BE_REPLACED 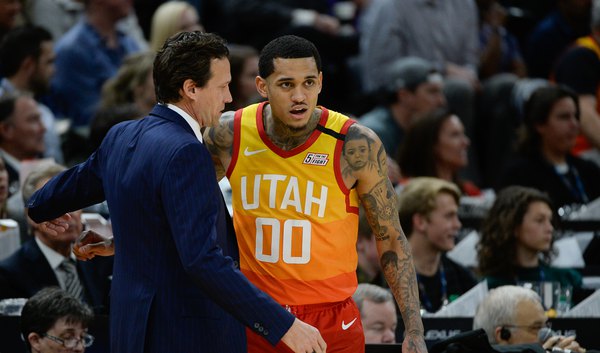 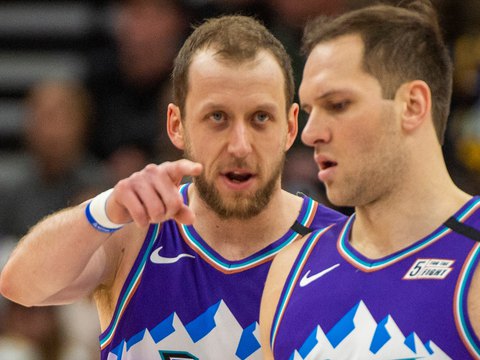 Without Bojan Bogdanovic on the floor, the Utah Jazz are going to have to play it a little differently in Orlando
By Eric Walden • 1d ago
END_OF_DOCUMENT_TOKEN_TO_BE_REPLACED
L