He was 7 years old and had joined the Nevada Youth Football League. Hall played in a jamboree in Orem with teams from Nevada and California. That moment stuck with him — it was fun and exciting.

And it was the exact moment he fell in love with the game.

Saturday will be another moment Hall won’t forget about anytime soon. The freshman quarterback is set to get his first career start at Tampa, when BYU takes on South Florida.

“I’m just going to enjoy it; I’m not going to overthink it too much,” Hall said. “Just going and playing the game I love with the guys that I love next to me.”

The game will be more momentous than a new quarterback getting his shot.

Come Saturday, Hall will be the first African American to start at quarterback for BYU in the program’s nearly 100-year existence.

“I'm very proud of my ancestors, very proud of my ethnicity and all the things that come with that,” Hall said. “So, it is an honor and a privilege to be here and to be playing in this wonderful university.”

How will the BYU offense look with Jaren Hall at quarterback? If there are changes, they will be at the margins.

BYU uses bye week to regroup, get a jump on South Florida

South Florida is struggling this season, but BYU has its own problems to worry about

BYU quarterback Zach Wilson has surgery on throwing hand and will be sidelined until November, but he is expected to return

Fifty years ago, BYU played a role in an incident that had a hand in changing the trajectory of its football program. In 1969, 14 black players from the University of Wyoming’s football team asked Cowboys coach Lloyd Eaton if they could wear black armbands during the upcoming home game against the Cougars.

The previous year, when the teams played in Provo, Wyoming players complained about being pelted with racial slurs from the Cougar Stadium crowd. That incident, and the then-policy of The Church of Jesus Christ of Latter-day Saints, which at the time barred black males from holding the priesthood and black men and women from entering temples, inspired the protest.

Eaton not only rejected his players’ request; he dismissed all 14 players from the team. For BYU, it was a public relations disaster.

BYU added its first African American player the following year, the priesthood/temple ban was lifted in 1978 and the program increasingly embraced black and other athletes of color in the seasons that followed. This season, the Cougars’ roster includes more than 50 players of African American, Pacific Island or Hispanic heritage.

In 2016, the university hired its first head coach of color, bringing in Kalani Sitake, who is of Tongan descent, to run the team. Now, three years later, BYU is breaking another racial barrier, at least on the football field.

“It is awesome that you are seeing so many different types of quarterbacks [play college football], whether it is their backgrounds or race or whatever is involved,” Sitake said. “It has been 150 years now, and we have seen a lot of cool things happen. We have Polynesians playing quarterback, too, so a lot of crazy things are happening right now.”

What took so long?

Which leads to the question: Why has it taken until 2019 for BYU to start its first black quarterback?

The program is the home of legendary QBs Gifford Nielsen, Jim McMahon, Marc Wilson, Steve Young, Robbie Bosco and Ty Detmer, and numerous standout quarterbacks a rung or two below. But all were white, and most — but not all — were Latter-day Saints.

BYU’s campus diversity — or the historic lack thereof — may provide at least a partial explanation.

While non-LDS students are welcome at BYU and the school recruits non-LDS student-athletes, 99 percent of the the university’s students are Latter-day Saints, according to the school’s website. More broadly, 85% of Latter-day Saints in the U.S. are white, 8% are Latino, 5% are other races and just 1% are African American, according to the 2014 U.S. Religious Landscape Survey, conducted by the Pew Research Center’s Forum on Religion & Public Life.

Hall, who went to high school at Maple Mountain in neighboring Spanish Fork, believes BYU gets a bad knock on the diversity front. Yes, he says, most of the university’s students are Latter-day Saints — he’s a church member himself — but it’s a mistake to pigeonhole anybody on that basis. He does agree with one stereotype, however.

“There’s a lot of people [at BYU], so you get everything from all over the world and it’s wonderful,” Hall said. “I love the area. The stigma around it is ‘a lot of bubbly nice people,’ right? Which I think is true. It’s very true.”

Demographics and diversity are not topics Hall tends to bring to the football field. So while he’s proud to be the Cougars’ first black starting quarterback, he’ll leave it to others to put it into context.

JAREN HALL AT A GLANCE

A mission and maturity

Hall threw for over 5,000 yards and 50 touchdowns at Maple Mountain. After graduation, he served a church mission in the Sacramento, Calif., area. He believes going on a mission before starting his college football career helped him prepare for this moment.

During those two years in Northern California, Hall would use his weekly day off to try to stay sharp athletically. After writing his letters back home, he would go throw or whatever else he could to stay in shape.

Since Hall got back from his mission, Sitake has enjoyed seeing his young QB improve on a weekly basis.

Hall stepped up during spring practice, when Zach Wilson was recovering from shoulder surgery and couldn’t participate — even while playing for BYU’s baseball team.

So, when Wilson had to step off the field at Toledo with a fractured thumb, Hall was ready to fill in once again.

“Since he got home from his mission, seeing his approach every day," Sitake said, “the guy is just waiting for his number to be called and it just happens to be this week.”

A legacy player wants to leave his own legacy

Even though Hall spent a major chunk of his childhood just down the street from BYU, he was connected to the university long before he was even born.

Kalin Hall, a Dixie College All-America running back, played fullback for the Cougars in 1992-93, where he averaged 5.3 yards per carry. During his time on campus, he met his wife, BYU All-Around gymnast Hollie Hamilton. The pair got married in 1993.

KJ Hall, their oldest offspring, had a career 390 rushing yards on 65 carries and three touchdowns, and caught 15 passes for 189 yards at BYU before retiring early from college football.

Jaren is the Hall’s second oldest son, followed by brothers Dawson and Kyson. Mateya is the couple’s youngest child and only daughter.

Even though he grew up with two former BYU athletes as parents, Hall said the only expectation they had of their children was for them to work hard in whatever they do, be it school or athletics.

“Now, sports have always been, obviously, a big factor in our household,” Hall said. “So, when me and my siblings started pursuing that, they just expected us to work hard — to be our best selves at all times.”

Hall was never pressured to pursue football. He fell in love with it all on his own.

And when it came down to choosing which school to play for, Hall saw how BYU influenced his father's life.

“I saw what it did for my dad in his life, meeting his wife here at BYU,” Hall said. “I always figured that it would kind of do the same for me.”

With his family, friends and fellow students looking on when he takes the stage Saturday, Hall is well aware of the example he will be setting as he takes those initial snaps and makes BYU history. And he hopes he can be someone anyone can look to and feel inspired.

“I just want to be the best example I can be of hard work and being a respectful young man to coaches and players,” Hall said. “Just trying to do everything the right way. I’m not perfect, but hopefully I can send a message of love. When you fall in love with the game, you can allow it to change your life for good.”

END_OF_DOCUMENT_TOKEN_TO_BE_REPLACED 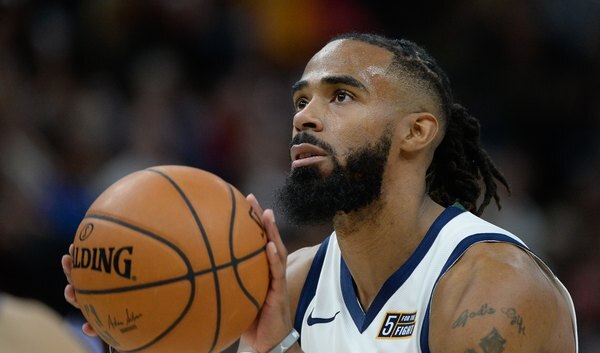 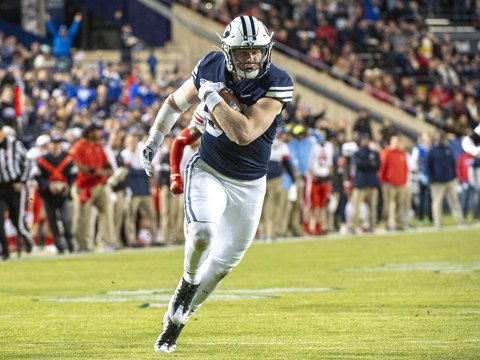 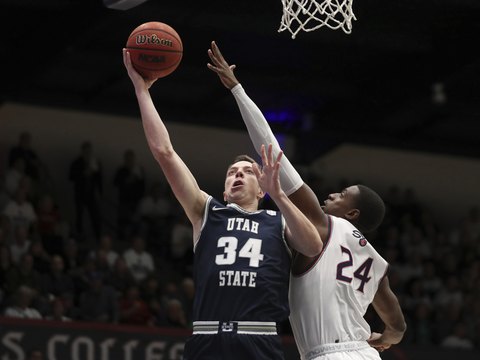