The Triple Team: Mike Conley breaks out and thanks Utah Jazz fans in 29-point, game-changing performance

1. Conley breaks out of slump with game-best performance

The Jazz gave up a 17-6 run to end the 2nd quarter that turned what had been a torrid start until a bit of a wash, with Utah only up one going into the break. All of a sudden, a game that the Jazz looked like they should win was in real doubt.

And then Mike Conley showed us that he still is Mike Conley. His scintillating third quarter run, in which he scored 18 points on 6-8 shooting (including 4-4 from 3-point range), adding two assists and two steals, was the Conley that Jazz fans have dreamed about for over half a year now.

That was part of a 29-point, five assist, two steal performance in a cool 32 minutes.

Maybe it’s because of that waiting period, but the connection between Conley and Jazz fans seems greater than what you’d expect five games in. He legitimately feeds off the crowd, and vice versa. They chanted his name multiple times in that third quarter, and he loved it.

“I’ve never experienced that before in 13 years of playing basketball. Especially on October 30th. That’s unique, that’s special," Conley said. "I could tell they were feeling like I was. They were waiting, had a lot of energy built up. It was just emotional, it was great to feel that.”

But then again, it’s easy to root for Conley. His teammates all legitimately love him. He’s honest and open with fans, both through the media and in person. To use an overused cliche, he wears his heart on his sleeve, and so it was easy to see his disappointment with his early play and his elation when tonight’s outburst happened.

“You feel the energy from the crowd in particular, your teammates. You say, “alright, yeah, this is the game,” Conley said. "Hopefully it’s the beginning of the positive light.”

2. Jazz defense keeps another opponent to under 97 points

Tonight, there was a regulation basketball game that ended with the score 159-158. It was Wizards vs. Rockets, if you want to look it up. I thought Wizards beat writer Fred Katz put it best: one team scored 77 points in the first half, scored more points in the second half, and still lost.

I bring that up because the league has been scoring at a higher level than we’ve seen in decades. Right now, the league is averaging about 110 points per game, thanks to efficient scoring and games with a whole lot of possessions. The Jazz, though, have held teams to 92.4 points on average.

The primary reason is that Rudy Gobert is the scariest person to face at the rim on planet Earth. Patrick Patterson airballed a 6-foot floater because Gobert was nearby, and he figured he had to lob it high to get it over the Stifle Tower.

Gobert allows them to play tremendous moneyball defense. Tonight was a great example: the Clippers got only 24% of their shots at the rim, good for 7th percentile among games played so far, according to Cleaning the Glass. They got exactly one corner three, they missed it. Half of their shots came from mid-range, and without Kawhi, they didn’t make that many of them. It’s a recipe for success.

The scary thing is that this team still thinks they have a lot of things they can improve on defensively, and I kind of agree. Ed Davis hasn’t been particularly effective so far. Jeff Green can float in and out of games. They fouled a ton in Phoenix and in L.A. They turned the ball over a ton, giving opponents transition chances. Honestly, they’ve played some weakened opponents. They can get better, and they’re already the best. That’s pretty scary.

Now also seems like a reasonable time for an admission of ignorance on my part. Here’s what I wrote during the preseason, when they had allowed 125+ points in four straight games:

“They almost undoubtedly will turn the effort level up when the regular season comes around next week... That lack of effort, that lack of focus on the defensive end we’ve seen means that these preseason games that should be used as warmups for the regular season won’t be very effective. That pushes the warmup period into the regular season’s first month. In other words, we could see an elongated stretch of time where the Jazz are still trying to figure out the nuts and bolts of how they play defense, and in that time, they could lose some games they should win. And come down the stretch, they’re going to wish they had a couple more wins in the incredibly tough Western Conference standings.”

Nope, they figured it out essentially immediately. I thought they’d flip a switch, but not from worst to first. That’s hard to do.

Royce O’Neale is in a contract year. He shot zero times tonight. He had zero points. He started and played 24 minutes.

Do you know how crazy that is? How many players that would have found a way to take a shot or eight, because how else does one raise one’s scoring averages? Legitimately nearly everyone would. I’m not talking about players with a Trey Burke-ian level of self-interest, I’m talking about normal role players on the level of O’Neale, ones with their own team’s best interest at heart. I mean, Derrick Favors, who everyone loved and respected for being selfless as possible, took a YOLO shot or two a game.

But no, O’Neale kept the ball moving, played terrific defense on Lou Williams, the opponent’s best player. He competed for rebounds, and fouled just once. He played a good game of basketball without having a hint of scoring.

Here’s the good thing for O’Neale: he’s going to get paid regardless. The league has smartened up about how they evaluate players, and ones like him who contribute in other ways get significant amounts of money. If he doesn’t get eight figures per year of salary, he’s going to come very close. And that makes sense, because he’s a winning player who can defend, shoot well, and plays as part of a team.

No one (else) will talk about O’Neale tonight, and that makes sense. But the league’s talent evaluators are always watching, and they like what they see.

END_OF_DOCUMENT_TOKEN_TO_BE_REPLACED 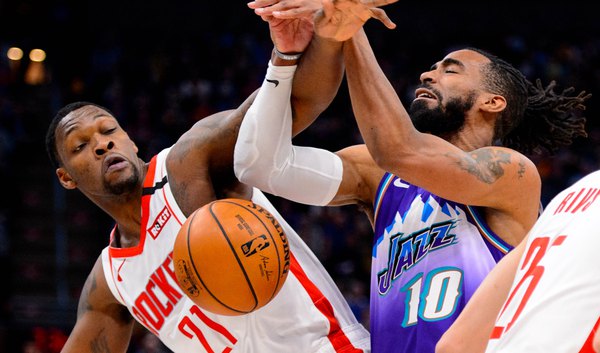