As veteran players Ed Davis and Jeff Green were officially introduced Friday morning as new members of the Jazz, each said his rationale for choosing Utah from among their suitors was actually pretty simple.

“At this stage of my career, I wanted to play on a veteran team, a team that has a chance to contend for a title at the end of the year,” Davis said. “That was the main thing for me.”

“Same,” added Green. “With the personnel that they were building on this team, the opportunity to win was most important.”

Davis agreed to a deal with the Jazz on the opening day of free agency, accepting the team’s offer of the “room midlevel exception.” Green joined up a few days later for a third consecutive veteran’s minimum (something he conceded he viewed as “disrespecting,” but which he would use “as motivation to continue to work, continue to prove a lot of people wrong”).

They said looking at a roster that included a budding superstar in Donovan Mitchell, two-time Defensive Player of the Year Rudy Gobert, a pair of veteran sharpshooters in Joe Ingles and Bojan Bogdanovic, and which now also features Mike Conley — a guy each had teamed up with in Memphis — as the new point guard convinced them that the Jazz were capable of big things.

Davis pointed out that loading up not only on talent but experience was particularly appealing.

Ed Davis: “I’m excited about playing with a lot of veterans — there’s a lot of experience on this team. When I was younger, early in my career, I didn’t understand why the vets always wanted to play with other vets, guys with experience. Now I understand it.” pic.twitter.com/IWDuDZbzAD

“I’m excited about playing with a lot of veterans — there’s a lot of experience on this team,” he said. “When I was younger, early in my career, I didn’t understand why the vets always wanted to play with other vets, guys with experience. Now I understand it. So I’m definitely looking forward to that.”

Both cited Conley’s presence as an important factor in their electing to select the Jazz.

Asked what Conley was like, Green went on to explain why the longtime Grizzlies star recently was voted the NBA’s “Teammate of the Year.”

‘I’m not at peace with how my career ended,’ former Jazzman Joe Johnson says ahead of BIG3 league’s visit to Salt Lake City

Ice Cube on BIG3 basketball coming to SLC: ‘I don’t know if there’s anything that’s gonna roll into Utah that’s gonna be better than this’

Emmanuel Mudiay comes to the Utah Jazz with room to grow

Weekly Run podcast: In-depth analysis — and a few debates — on all of the Jazz’s offseason additions

“He’s a guy who fights for his team, loves his team, supports his teammates,” Green said. “A guy with no ego who’s gonna play hard every night and try to win.”

Davis said that when Utah started to recruit to him, he reached out to Conley for his admittedly brief impressions of the organization.

“There’s no ego, he’s just a good person all the way around. He’ll come in every day and there’s no bulls--- with him. You can’t do nothing but respect that,” Davis said. “… He definitely gave me the confidence that this team was ready, so that helped out a lot for me. He’s one of the reasons why I made my decision so quick.”

Now comes the process of acclimating themselves and their games to the team. They’ve already met with Quin Snyder and members of his coaching staff (Green grinned in noting, “I’ve had multiple looooong conversations with Quin over the last week or two”), and while they said there hasn’t yet been any discussion of their specific roles, they also said there was no mystery there either. Davis will back up Gobert and provide rim-protection and rebounding; Green will bring scoring and “reliving the experiences of the Finals — how you get there, what’s it gonna take.”

There was a palpable confidence emanating from them that, with the team they’ve joined, a Finals trip could be in their future.

“There’s a lot of guys that open space, it’s gonna create a lot of shots for everybody. There’s gonna be a lot of opportunities for people to have great games,” Green said. “And I feel like with an unselfish group, we have a lot of guys who can be proud of that. That’s what you look forward to — a team that’s very unselfish and gonna play for each other.”

END_OF_DOCUMENT_TOKEN_TO_BE_REPLACED 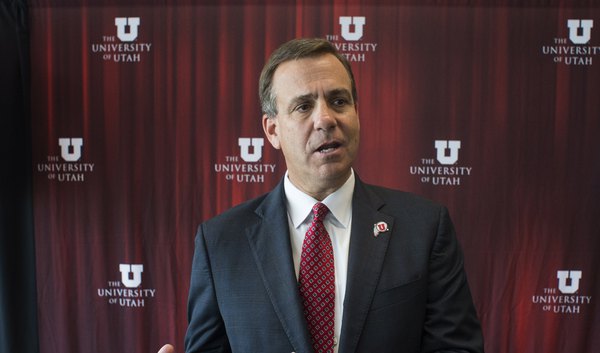 Boras to clients in memo: Don’t bail out baseball owners
By The Associated Press • 1d ago
END_OF_DOCUMENT_TOKEN_TO_BE_REPLACED
L