Ben Barnes, like many of us, guiltily doodles in a notebook during corporate meetings at his job.

There is a substantial difference, though, between Barnes and the everyday scribbler: Barnes’ doodles are seen by billions.

That’s because, through a 15-year career in sports graphic design, Barnes has dreamed up some of the most familiar images in the business, logos that end up on fields, courts, jerseys, and everywhere in between. He’s been consulted on the brand identity for college football and NFL teams, MLS clubs, and nearly a quarter of the NBA. If your team wants a new look, Barnes has been one of the top designers to go to.

Now the art director for the Utah Jazz, a title he’s held for six years, Barnes’ creations are the impetus behind the team’s new — albeit old-school — visual look. He’s the one who brought the Jazz out of the mountain era and into the new note days, with its distinctive and iconic visuals that have greatly increased the Jazz’s merchandise sales and gotten fans excited again about their identity.

This is Barnes’ dream job. As a 15-year-old in Utah with a keen visual eye, Barnes couldn’t help but notice the mountain-inspired logo used for the 1993 All-Star Game, at the time, a look the Jazz hadn’t used before. Then, he designed a new logo for the Jazz that incorporated the mountains and the Jazz name, a mix of the past and the present. Besides giving his take on other teams’ logos, he also created a college football preview magazine for his friends, prominently featuring Barnes’ original drawings of every football logo out there.

Barnes, knowing what he wanted to do, attended Utah State for graphic design. There, he continued playing with logos of other teams, and even got a token amount for his first paid commissions: the logo for the Utah State hockey club team, among others.

After college, while working his day job, Barnes contacted the national design firms that work on sports, hoping to find a spot in what he wanted to do. One, Rickabaugh Graphics in Ohio, gave him a shot: he helped with a rebrand for Florida Atlantic University. From there, he was hired by RARE Design, based out of Mississippi, first as a freelancer and then full-time, requiring a move to the state for him and his wife.

But the work made the relocation worthwhile. While at RARE, Barnes took on some of his most iconic projects. He collaborated with the firm on the San Francisco 49ers logo, the Miami Heat’s secondary look, a new additional “Rip City” identity, and the Portland Timbers’ new MLS look.

Barnes wanted to return to Utah, though, so took a job with Real Salt Lake, working as their one-person art department for three seasons. There, he created the Lion secondary logo used by the team. After that, Barnes found the opportunity to work for the team he grew up rooting for: the Utah Jazz.

However, when Barnes was hired in 2013, the Jazz’s visual identity was a mess. The team was on its third color variation of the aging mountain logo look, and while the colors themselves were getting closer to the navy, yellow, and green they have now, there was no continuity between that and the mountain look the team had at its Finals-winning peak.

Weekly Run podcast: In-depth analysis — and a few debates — on all of the Jazz’s offseason additions

Monson: New Utah Jazzman Mike Conley reveals himself — and you’ll like what he has to say

BIG3 basketball is coming to Salt Lake City next week. Here’s what you need to know.

“You want to have a silhouette, you want to have something, that when you look at it you can immediately tell what team that is," Barnes said. "I don’t think the Jazz really had that because it was very off the shelf. It kind of looked blue, but maybe it wasn’t really unique.”

So the Jazz embarked, under Barnes’ direction, on a multiyear visual clarification tour. Back came the classic note, with Utah added to the top-right above the lettering, tying the Jazz’s future to its’ founding. In came cleaner secondary and tertiary logos, and a cohesive font the Jazz could use on everything. Everything came at a uniform 66-degree angle, a look that immediately ties everything together and to the Jazz. That includes on the jerseys themselves, which received a redesign for the 2016-17 season, the final season Adidas held the NBA’s jersey contract.

Under their regime, Nike wanted to change how NBA uniforms worked. They wanted every team to have at least four jerseys; last year, the Jazz had six. Under their vision, every team should have two long-term uniforms — dubbed the Icon and Association looks — and at least two rotating looks: a “Statement” jersey that would rotate every two years, and a “City” look that changed every season. Some teams got “Earned” playoff jerseys, others received limited-edition Throwbacks. Nike wanted to push the boundaries with the new threads, and Barnes was asked to collaborate with the company on the uniforms.

Innovate they did. The gold “Statement” jersey was the first time the team had used that color as the primary color on a jersey in the team’s history, even though the color had been used by the team since 1974. And the “City” jersey, well, that was just a wild departure. Nike wanted the City uniforms to tell an under-represented story from the home team’s location. For Utah, which had already gone to the mountain uniform look, representing the state’s iconic National Parks was the logical choice.

So Nike’s designers and Barnes’ team looked to the banding gradient imagery of southern Utah’s red rocks. They incorporated a new Utah state basketball logo, and the routes from Salt Lake City to Moab and to St. George. They even created a new court for the look, with Delicate Arch planted in the center. And in the process, they created the most popular secondary uniform the Jazz have ever had, extending a year past its expected lifespan.

“The great thing about City edition is it’s a secondary thing," Barnes said. "You’ve got our core colors that aren’t changing, and then you can have this other place which can be different things and tell different stories that aren’t forever.”

Barnes’ stamp is everywhere in the Larry H. Miller portfolio. Just as he did with the Jazz, he clarified and built on the Salt Lake Bees’ visual identity. He designed the Salt Lake City’ Stars’ and the NBA2K league’s Jazz Gaming squad’s logos from scratch in recent years. This year, he was tasked with creating a whole new visual identity for the rebranded Salt Lake City Summer League; that’s the most recent sketchbook he was willing to show, the ones that don’t contain the secret plans for the Jazz’s future looks.

Now that the Jazz’s Team Store is more directly under team control after the sale of Fanzz, he also creates much of the merchandise on display there, from the “Item of the Game” sold at the arena to timely hats, shirts, and more.

The sheer versatility of Barnes and his team makes him one of LHM’s most valuable employees.

“What is super unique is that he has a very keen understanding of what is visually important,” said Bart Sharp, the Jazz’s senior vice president. “We’re trying to do something not just for the sake of being cool but for to do things to further promote the brand. He has accomplished all that and quite frankly more.”

And of course, there’s the reality that Barnes is one of sports’ most sought-after designers. Even while working for the Jazz, Barnes continues to freelance with RARE, leading him to take a major role in the new logos recently revealed by the Kings, Hornets, and the brand-new Pelicans’ name and look — the latter being put together in a matter of months, not years as is typical of such projects.

But as much as Barnes’ work is worn by millions of sports fans and seen by billions more, he’s willing to spend his time on smaller projects. Since college, Barnes has been a part of a fantasy basketball league, one he designed the logos and jerseys for, even if they are all imaginary. The winner of the league receives championship gear designed by Barnes, with the victor’s logo.

Perhaps his most rewarding logo of all was that of the Logan Terrible Lizards, his six-year-old son Logan’s fantasy team. Logan directed the enterprise, including the name — the word “dinosaur” comes from the Greek for “terrible lizard” — and the logo itself, which Logan insisted feature a lightning bolt and a horn on the dinosaur’s nose.

This year, strangely enough, Logan won the league. “I don’t know, I’m proud and also sad, because he beat me on the way,” Barnes said.

For consolation, Barnes could go back to his sketchbook, busily designing the sports we know. The ones here, in reality.

END_OF_DOCUMENT_TOKEN_TO_BE_REPLACED 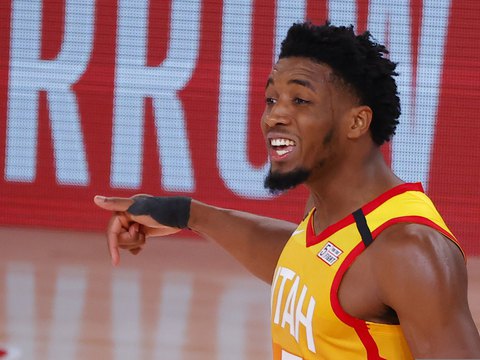