Midway • If he becomes the second member of his extended family to win consecutive State Amateur golf titles as a teenager, Preston Summerhays will always remember one of the best bogeys of his life.

Utah State golfer Chase Lansford, Summerhays' opponent in Saturday's 36-hole match at Soldier Hollow Golf Course, advanced to the finals with the help of a remarkable par save Friday on No. 15. The 16-year-old Summerhays' 6 on No. 16 was even better.

Three weeks after returning from a church mission, Elijah Turner seemed ready to pull into a tie on the par-5 hole, where Summerhays drove into the left rough and couldn't find his ball. Even with a two-stroke penalty, Summerhays somehow tied the hole and remained ahead on his way to a 1-up victory.

Playing his second drive, Summerhays in essence made a birdie, via a nice bunker shot and a tough, 10-putt. Turner missed the green with his third shot, chipped poorly and missed a longer putt.

“Then suddenly the pressure was back onto him,” Summerhays said, “because he thought he was going to win the hole, and I just made that putt for the switcheroo.”

That's a good description of match play, and the Summerhayses know how this stuff works. More family golf history is in play Saturday at Soldier Hollow, where Preston Summerhays will try to become the State Am's first back-to-back winner since his uncle, Daniel Summerhays, did so in 2001 at nearby Wasatch Mountain State Park at age 17. In his return to the finals five years later, though, Daniel lost to Tony Finau at Soldier Hollow.

Preston Summerhays has responded well to playing as the defending champion, saying, “I try not to add pressure.”

He played No. 18 for practice on his way to the clubhouse after beating Jake Vincent in 17 holes in the quarterfinals, and that proved to be good strategy when he had to play the last hole in the semifinals.

Summerhays, who will be a high school junior in Arizona, spends the summers at his family's home base in Davis County. Turner, a former Lone Peak High School golfer who will play for BYU, almost completed an amazing run to the finals. He got home last month just in time to qualify for the State Am, after spending two years in Ghana for The Church of Jesus Christ of Latter-day Saints.

Lansford also is a returned missionary who wanted to play for BYU, after growing up in Texas. That didn't work out, but Utah State coach Dean Johansen learned about Lansford and offered him a scholarship and he has become the Aggies' second-best player for the past two years.

Favorites roll as match play begins at State Am, but 15-year-old Grace Summerhays fails to advance

He described himself as “very overwhelmed” to reach the finals, via a 1-up victory over BYU golfer Spencer Dunaway. No. 16 also was pivotal in that match, as Dunaway drove into a similar area as Summerhays did later. Dunaway found his ball, but needed two hacks to escape the rough and fell behind after bogeying the hole.

Lansford had lost his lead after No. 14, where he hit a tee shot out of bounds. But chips that he accurately labeled “absolutely incredible,” setting up a tying birdie on No. 13 and a tying par on No. 15, proved vital. Dunaway had driven the green on the par-4 No. 13, but missed an 8-foot eagle putt. After hitting a pitching wedge shot long on the par-4 No. 15, Lansford chipped to within tap-in range.

“I had maybe a 1-foot circle to that I had to land that ball in, at the right height,” Lansford said. “It just came out perfectly.”

Lansford will need more shots like that Saturday, if he hopes to derail Summerhays’ back-to-back bid and become the first USU golfer to win the State Am since Jason Wight completed a three-year run for the Aggies in 1995.

END_OF_DOCUMENT_TOKEN_TO_BE_REPLACED 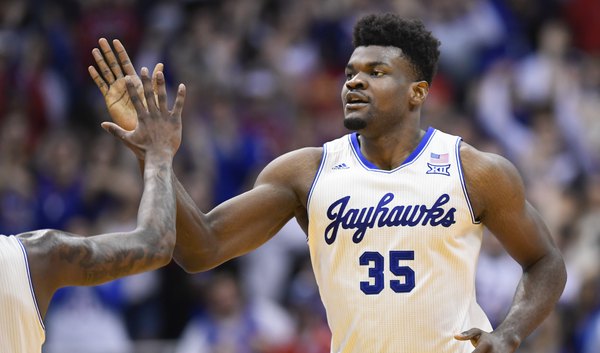 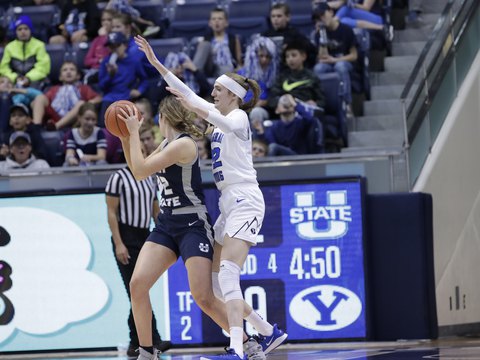 BYU’s women’s basketball team has loads of grit, and the Cougars will need it early this season
By Norma Gonzalez • 1d ago
END_OF_DOCUMENT_TOKEN_TO_BE_REPLACED
L

Job interviews without interviewers, products of the pandemic
By Julie Weed | The New York Times • 9m ago

Utah Jazz All-Star Donovan Mitchell feeling ‘blessed’ by extension, but focused on a championship
By Eric Walden • 36m ago