After losing Jae Crowder, Derrick Favors and Raul Neto, the Jazz needed to acquire some talent to bolster their bench.

The Salt Lake Tribune confirmed that Utah agreed to terms with Green and Mudiay on one-year minimum contracts on Tuesday, filling out their bench in spots where major moves had forced departures. ESPN’s Adrian Wojnarowski was first to report both agreements.

Green is an 11-year NBA veteran who has played for seven different teams over his career, including with the Washington Wizards last season. A versatile 32-year-old, 6-foot-9 power forward with a 7-foot-1 wingspan, Green holds career averages of 13.2 points, 4.5 rebounds, and 1.8 assists per game, shooting 44% from the field and 33% from deep. Last year with Washington, he averaged about 12 points while playing over 27 minutes per game for an underachieving team.

After being selected by the Seattle SuperSonics with the fifth pick in the 2007 NBA draft, Green spent three and a half years with the Sonics/Thunder franchise as a scorer alongside Kevin Durant and then Russell Westbrook. But a heart condition in 2011-12 caused him to miss the entire season and threatened his career, before he was cleared to play again in 2012-13.

Green had the best scoring season of his career in 2013-14 with the Boston Celtics, averaging 16.9 points per game. He was traded the next year, though, to the Memphis Grizzlies, then eventually bounced around to the Clippers, Magic, Cavaliers and then the Wizards last year. He’s played at least 22 minutes per game in every season of his career.

Meanwhile, Mudiay, a 6-foot-5 point guard who was the seventh pick of the 2015 NBA draft, began his career with the Denver Nuggets before moving to New York in the middle of last season. For the Knicks, Mudiay became their second-leading scorer, averaging 14.8 points per game while starting 42 for the struggling club.

Mudiay hasn’t ever been a good 3-point shooter — consistently shooting about 32% from there — but last season he found his form from mid-range, shooting 48% between 10 feet and the 3-point line. But the Jazz’s development team hopes it can round out his rough edges to help grow the 23-year-old into a contributing player on a good team.

The Triple Team: Andy Larsen’s analysis of how Jarrell Brantley stood out from the group of Jazz second round picks in SLC Summer League Game 1

Monson: How did the Utah Jazz build one of the NBA’s best teams? Through acumen and patience.

Green, who has started 63% of games in his career, could be an option at the starting power forward position, too, if the Jazz would like to bring Ingles off the bench to run the team’s second unit. Mudiay figures to be insurance if Exum misses time again this season.

Both deals are for the league’s minimum. Because Green has more than 10 years of NBA experience, he’ll earn $2,564,753. Meanwhile, as Mudiay has four years of NBA experience, he’ll receive $1,737,145 next season. The Jazz now have 12 players on the roster, and must sign one more to a minimum contract to reach the roster minimum of 13. They can sign up to 15, plus up to two two-way contracts.

END_OF_DOCUMENT_TOKEN_TO_BE_REPLACED 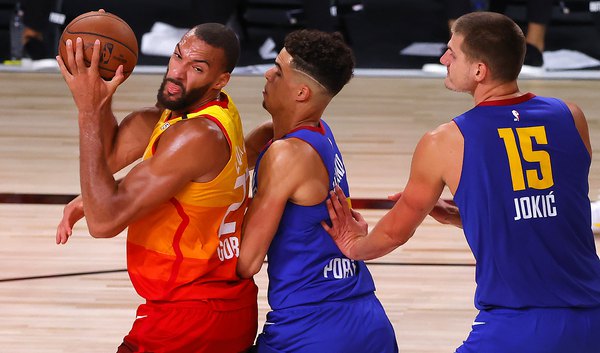