The wait should end Friday.

The Olympics question that’s been hovering over Utah and neighboring Colorado is expected to be answered when the United States Olympic Committee convenes its board of directors meeting in San Francisco.

Either Salt Lake City or Denver will be the U.S. bid city for a future Olympic Winter Games. The most likely targeted cycle is the 2030 Olympics. If that’s the case, the U.S. would submit the bid to the International Olympic Committee for a selection process that would take place in 2023. Over the past few months, officials from Salt Lake City and Denver have explained in detail how a future Games would be held in their respective cities and states, from venues to budget to fan experience and beyond. Everything the USOC wanted to see, each side has submitted.

Salt Lake City is widely viewed as the favorite. The Olympic venues and facilities constructed for the 2002 Olympics have been maintained and remain very much part of the worldwide sporting scene every year as winter disciplines like bobsled, luge, skeleton, speedskating and freestyle skiing circle back to Utah for World Cup and World Championship competitions.

Utah, in fact, changed the paradigm of the post-Olympic location. Its Olympic legacy endowment allowed the state to continue to be part of the conversation, even in the decade since the Games left.

“The beauty of what we put in place, whether we’re selected or not selected, whether we get a Games or we don’t get a Games, it just makes sense for the community to stay engaged in the business of sport,” said Jeff Robbins, CEO of the Utah Sports Commission who is also a co-chairman on the Utah Olympic Exploratory Committee.

Robbins, who was tasked by former Utah Gov. Mike Leavitt with building Utah’s Olympic legacy even before the 2002 Games began, said it’s a model that will continue to stand the test of time. It’s also a main reason why Salt Lake City is, once more, in the running to host the world. Also, many of the same officials who helped steer the 2002 Games decided to return for another go.

“What I’m proud about is we pulled together a really good team here,” Robbins said.

Fraser Bullock, the former chief operation officer of the 2002 Games who is a co-chairman on the exploratory committee, said the tension surrounding the bid decision is mounting, but for good reason.

“We love the Olympic movement here in Utah, and the prospect of being able to host again is incredibly exciting,” Bullock said. “I feel a quiet confidence of our potential selection. But I recognize it’s a competitive race, so you have to do the best you can every step of the way.”

Utah’s Olympic Exploratory Committee has long vowed that no public funding or taxpayer money will be needed during this bid process. It will be entirely privately funded, including the IOC bid process. The budget anticipated for a 2030 Games is $1.4 billion. Bullock recently said an Olympic return to Salt Lake City can be self-sustaining for several reasons: The IOC awards $650 million to a future selection and it’s anticipated that $300 million will come from ticketing; that’s nearly $1 billion without factoring in merchandising and domestic sponsorships.

The budget of $1.4 billion is in today’s dollars, but Bullock anticipates it being anywhere from $1.7 billion to 1.8 billion come 2030.

During their on-site visit last month, U.S. Olympic officials said they were planning on conducting their own statewide poll to gauge how Utahns felt about an Olympic return. Recent polls have been overwhelmingly supportive, with numbers as high as 89 percent.

Lauren Simpson, policy director for the Alliance for a Better Utah, said in a statement that while excitement around the Games is there, that shouldn’t overshadow issues the state is still dealing with day-to-day.

“We’re excited to discuss potential positive impacts on infrastructure, the homeless population and our environment," Simpson said. “Utahns have shown that we have a ‘Utah way’ of doing things, and we believe another Olympics could trigger really helpful conversations about progress for our state.”

Robbins and Bullock said they anticipate finding out the bid decision sometime Friday afternoon. Rather than stress, Bullock said he’s planning on hitting the slopes for a few runs in Park City.

“In celebration of the Olympic Winter Games,” he said, “I’m going to go skiing to celebrate the day.”

END_OF_DOCUMENT_TOKEN_TO_BE_REPLACED 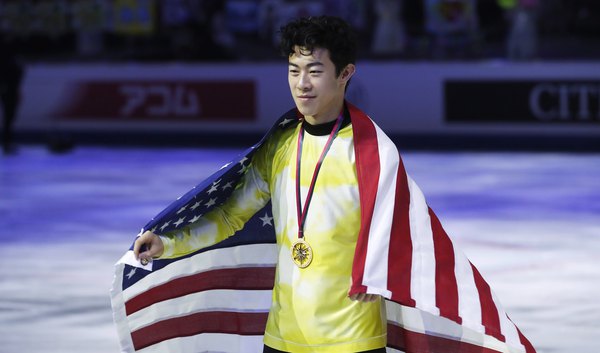 Even under the weather, Nathan Chen is the skater to beat at this week’s national championships
By Julie Jag • 8h ago