With the conventions over, Joe Biden’s team is rolling out an array of new religious outreach efforts targeting a diverse set of communities as his campaign vies with President Donald Trump’s for faith-motivated voters.

The Democratic presidential nominee’s campaign is holding a trio of virtual events in the swing state of Florida this weekend that focus on engaging Christian, Jewish and Muslim voters. Those will be followed in the days to come by events focused on other faith communities that could play pivotal roles in the election — including Latino evangelicals, Catholics, Hindus and young people of faith — as well as broader religious-themed events that delve into issues such as immigration and homelessness, according to details shared with The Associated Press.

Such outreach indicates that Biden’s team plans to strongly counter messaging from President Donald Trump’s campaign portraying the GOP as the friendlier party for voters of faith. During the Republican National Convention this week, for example, a nun praised Trump as in a speech as “the most pro-life president that this nation ever had,” referring to his anti-abortion record.

While Trump’s team often touts his record on abortion and freedom to worship, Biden is pitching religious voters on broader spectrum of issues. Josh Dickson, national faith director for the campaign, said it sees faith communities as “highly diverse in terms of their backgrounds, in terms of how they orient their faith to how they’re thinking about elections.”

“We also think many people of faith are not single-issue voters as much as Republicans want to paint them out to be, and we believe our campaign is deeply aligned with the core values most important to people of faith,” Dickson said, adding that systemic racism is a pivotal issue for many devout voters in this election.

The Trump campaign has already been focusing on faith communities that the Biden team is planning events for, such as Catholics and Chaldean Christians. Samantha Zager, deputy national press secretary for the president’s reelection effort, pointed to the number of GOP convention speakers who lauded Trump’s defenses of religious freedom as “a testament that President Trump will always prioritize and protect the fundamental rights of Americans of faith.”

Zager called the Democratic ticket “a promise for taxpayer-funded abortions, anti-Catholic bigotry, and attacks on the religious liberties all Americans are guaranteed by the Constitution.”

[Listen to ‘Mormon Land’: Two politicos make their pitch for why Latter-day Saints should vote for Biden or Trump]

Biden, a lifelong devout Catholic, doesn’t intend to cede the pews to Trump, however.

He recorded a three-minute video sent to faith leaders this week quoting the Bible to address concerns of Black, Latino, Asian American and Native American communities. The campaign is also circulating a letter in which he and running mate Sen. Kamala Harris ask devout Americans for their votes.

“(W)e invite you to stand with us, together, as we pursue a redemptive vision for our country centered in the inherent human dignity of all God’s children,” says the Aug. 16 letter, which has not been publicly released.

This weekend’s Florida events include a Friday outreach to Jewish voters led by Doug Emhoff, Harris’ Jewish husband, along with three Jewish Democratic members of Congress.

A Sunday event focused on Christians and hosted out of Orlando will feature Dickson and eight other faith leaders from different denominations.

Going forward, Biden’s team is working on other religious outreach projects. Building on listening sessions that were already taking place, the campaign is tapping advisory groups to help shape strategy for faith communities including The Church of Jesus Christ of Latter-day Saints, and Asian American and Pacific Islander Christians.

Beyond Florida, states likely to be focal points for faith-centered events include Pennsylvania, Ohio, Michigan, Wisconsin, Texas, Georgia and Colorado, according to the campaign.

END_OF_DOCUMENT_TOKEN_TO_BE_REPLACED 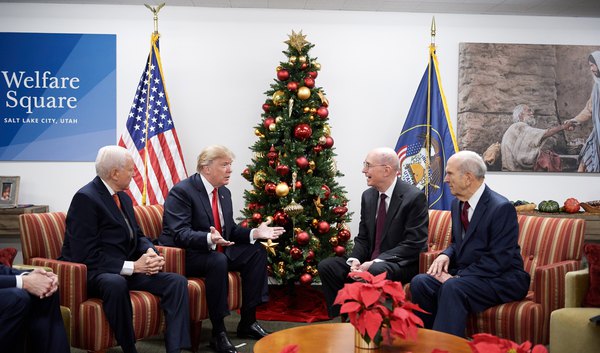 LDS presidential candidates: One GOP nomination, one assassination, many attacks for church views — but never a win
By Lee Davidson • 1d ago
END_OF_DOCUMENT_TOKEN_TO_BE_REPLACED
L

Steelers and Titans will play Monday or Tuesday due to COVID-19 outbreak
By Teresa M. Walker | AP Pro Football Writer • 39m ago