President Russell M. Nelson unveiled a new proclamation to the world Sunday morning, celebrating what members of The Church of Jesus Christ of Latter-day Saints believe was the pivotal moment in the faith’s history — a teen boy’s vision of deity in a secluded wood 200 years ago.

In the afternoon, he announced eight new temples — despite all current temples being temporarily closed due to the coronavirus — including firsts for mainland China and the Middle East and what will be the 24th for Utah (this one in Syracuse).

Nelson read the proclamation, titled “The Restoration of the Fulness of the Gospel of Jesus Christ,” in a prerecorded video from the grove in upstate New York, where church founder Joseph Smith had what is known as the “First Vision.”

Young Smith “had questions regarding the salvation of his soul and trusted that God would direct him,” the proclamation states, “In humility, we declare that in answer to his prayer, God the Father and His Son, Jesus Christ, appeared to Joseph and inaugurated the ‘restitution of all things’ (Acts 3:21) as foretold in the Bible.”

Nelson’s latest moves came on the second day of a digital-only General Conference, with the faith’s top leaders speaking to a handful of people in a small auditorium in downtown Salt Lake City and an online audience in the millions around the world.

It was followed by Nelson, hankie in hand, demonstrating a ritual known as the “Hosanna Shout,” in which members praise God by waving a white handkerchief back and forth, while repeating three times the words, “Hosanna, Hosanna, Hosanna to God and the Lamb! Amen, Amen, and Amen!”

He urged the media to “treat this very sacred observance with dignity and respect. The 95-year-old Nelson and the apostles with him then participated in the shout as part of a “solemn assembly,” this one occurring on Palm Sunday, marking the beginning of the Christian Holy Week.

The shout was first used as a collective membership experience at the 1836 dedication of the church’s first temple, in Kirtland, Ohio.

In his morning sermon, Nelson alluded to “disruptions” — including the coronavirus pandemic — during the past several weeks and thanked members for “choosing to hear the word of the Lord during this time of turmoil.”

We will ‘conquer it’

“Even as we speak, we are waging an ‘all hands on deck’ war with COVID-19,” Holland said, “a solemn reminder that a virus 1,000 times smaller than a grain of sand can bring entire populations and global economies to their knees.”

Eventually, humans will “conquer it,” the apostle said, and he hopes they will “be equally committed to freeing the world from the virus of hunger and freeing neighborhoods and nations from the virus of poverty.”

Holland said he further hopes “for schools where students are taught — not terrified they will be shot — and for the gift of personal dignity for every child of God, unmarred by any form of racial, ethnic or religious prejudice.”

“Because the restoration reaffirmed the foundational truth that God does work in this world,” he added, “we can hope, we should hope, even when facing the most insurmountable odds.”

The best hope for the future, he said, is “greater devotion to the two greatest of all commandments: to love God by keeping his counsel, and to love our neighbors by showing kindness and compassion, patience and forgiveness.”

The apostle spoke optimistically about the future.

“We all need to believe that what we desire in righteousness can someday, someway, somehow yet be ours,” he said. “I testify that the future is going to be as miracle-filled and bountifully blessed as the past has been.”

Other speakers Sunday explored ideas about setting examples, reaching out to members who have left and doing missionary work online.

Bonnie H. Cordon, president of the Young Women organization, drew on Jesus’ mandate to followers to let their light “shine before [others] that they may see your good works and glorify your Father who is in heaven.”

Why is “shining our light so important?” asked Cordon, the fourth woman (including a 17-year-old youth) to speak at this two-day conference. “The Lord has told us that ‘there are many yet on the earth … who are only kept from the truth because they know not where to find it.' ”

Latter-day Saints “can help,” she said. “We can intentionally shine our light so others may see. We can extend an invitation.”

She told listeners that they “can walk the journey with those who are taking a step toward the Savior, no matter how halting.”

They don’t have to do it alone, Cordon said. “The Holy Ghost will prompt us to know what to say and do. Such attempts may require us to step out of our comfort zone, but we can be assured that the Lord will help our light shine.”

Apostle D. Todd Christofferson explained what it takes to be good missionaries: love, example, and the Book of Mormon.

Invitations to join the LDS Church “cannot be a matter of self-interest, rather, they must be an expression of selfless love,” the apostle said. “...We cannot escape the fact that we need to understand and live the principles of the restored gospel as best we can for our invitations to be inviting. It is something often referred to today as authenticity. If the love of Christ dwells in us, others will know that our love for them is genuine.”

The third requisite is the “liberal use of the instrument of conversion that the Lord designed for this last gospel dispensation, the Book of Mormon,” Christofferson said. “It is palpable evidence of Joseph Smith’s prophetic calling and convincing evidence of the divinity and resurrection of Jesus Christ.”

Apostle Dieter F. Uchtdorf said everyone is welcome in the church.

“If Jesus spent his mortal life ministering to ‘the least of these,’ would he not love them today? Is there not a place in his church for all of God’s children? Even for those who feel unworthy, forgotten or alone?” the German said. “There is no threshold of perfection you must attain in order to qualify for God’s grace.”

The Almighty does not “show favoritism, the things the world values mean nothing to him.” Uchtdorf said. “He knows your heart, and he loves you regardless of your title, financial net worth, or number of Instagram followers.”

The apostle urged people to meet with the faith’s members and missionaries online during the “challenging time of coronavirus.” (Worship services have been canceled and most proselytizing is taking place through technology.) “When this difficult time has passed,” Uchtdorf said, “meet with us in our homes and in our worship places.”

All are his beloved children, the apostle said. “Even those who reject him. Even those who, like a headstrong, unruly child, become angry with God and his church, pack their bags, and storm out the door proclaiming that they’re running away and never coming back.”

Apostle Quentin L. Cook reached out to former members, beseeching them to return.

He declared Latter-day Saint leaders’ “heartfelt desire to be reunited with those who have been struggling with their testimonies, been less active, or have had their names removed from church records. … We need you! The church needs you! The Lord needs you! Our heartfelt prayer is that you will join with us in worshipping the Savior.”

Cook acknowledged that some former members “may have received offense, unkindness or other conduct that is not Christlike. We also know that some have had challenges to their faith that may not be fully appreciated, understood or resolved.”

But, he added, “please know that the church and its members will welcome you back.”

God wants humans “to become as he is,” Oaks said. “The divine plan...requires us to make choices to reject the evil opposition that tempts mortals to act contrary to God’s commandments and his plan. ...Sometimes our needed growth is achieved better by suffering and adversity than by comfort and tranquility.”

The 87-year-old church leader, next in line to take the church’s reins, also emphasized the importance of “chastity, marriage and the bearing of children” in the divine design.

"Outside the bonds of marriage,” he said, “all uses of the procreative power are to one degree or another a sinful degrading and perversion of the most divine attribute of men and women.”

Having read many letters from members requesting to return to the church after name removal or apostasy, Oaks concluded that “many of our members do not fully understand this plan of salvation, which answers most questions about the doctrine and inspired policies of the restored church.”

The 1995 proclamation on the family has become an oft-quoted document in Latter-day Saint circles. It also has been praised, parsed and politicked for its emphasis on so-called traditional gender roles.

On Saturday, Nelson unveiled a new church symbol, or logo, that aims to emphasize the faith’s full name and its ties to Jesus Christ. He also called on the world to fast and pray on Good Friday for relief from the coronavirus pandemic.

END_OF_DOCUMENT_TOKEN_TO_BE_REPLACED 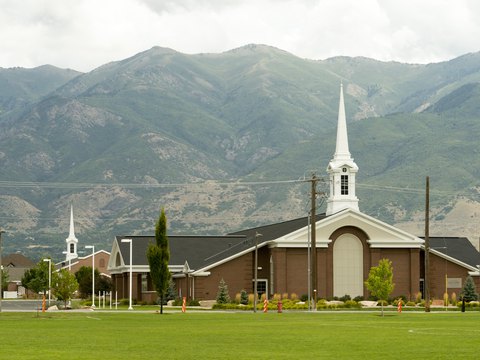