This is the third part in a three-part series examining how Western faiths, including the Utah-based Church of Jesus Christ of Latter-day Saints, are having to adapt to survive and grow in a nation where the government, with encouragement from the dominant Russian Orthodox Church, continues to put up barriers. Part 1 explains what Western faiths are up against in Russia. Part 2 explores the future of Mormonism in a land where missionary work is essentially barred.

Moscow • Just before 4 p.m. on Easter Sunday in 2018, in his first General Conference as president of The Church of Jesus Christ of Latter-day Saints, Russell M. Nelson made a historic announcement: The Utah-based faith would build a temple in a “major city” in Russia.

And, though it was after midnight in this distant land (and most Russians were fast asleep), some Latter-day Saints here began furiously messaging one another.

“I got texts from my [former] missionary companion,” recalls Kristina Nikogosyan, who works for the church in Moscow. “I was crying for three hours.”

It is a “huge blessing for Russia,” she says, “that God sees us.”

Sergei Antamanov, the church’s spokesman in Russia, didn’t hear the news until he was eating breakfast the next morning, and his Facebook page was exploding with the unexpected development.

Both Antamanov and Nikogosyan know the religious reality. The nation’s 23,000 Latter-day Saints are the smallest of Davids compared to the Russian Orthodox Goliath, whose influence and infrastructure dominate the physical and spiritual landscape.

It is the predominant religion of the people. Its multicolored domes weave in and out of the skylines among the citadels and the statuaries, the Soviet-era apartments and the gleaming new malls. Its cathedrals are almost as ubiquitous as the standard-brand Latter-day Saint steeples in Utah County.

When the Russian police arrived, deported American knew his LDS mission ‘would never be the same’

What the LDS Church, other Western faiths are up against in Russia: a dominant Orthodox Church and a wary government

Mormonism’s Russia dilemma: How to grow a fledgling faith with missionaries who can’t do missionary work.

In this vast country, those rounded roofs of Orthodoxy make a statement beyond architecture and aesthetics: This, they silently trumpet, is our land and our identity.

Will an intruding Latter-day Saint temple — representing a faith not just from the West but from America — actually be permitted to puncture that picture?

In 2016, the Russian government passed a strict law against proselytizing by so-called minority faiths. It prohibited talking about religion on the streets, in homes and in any public places.

The purpose was to forestall — or at least hinder — these denominations from growing or from luring away believers from the Russian Orthodox Church.

Another tactic being tapped to limit these faiths is to block them from building their own churches.

The report cited “a senior member of the Presidential Council on Human Rights and Development of Civil Society,” who said “there was a new tendency among regional authorities to restrict the construction or restoration of houses of prayer and churches on residential lands.”

In two separate cases in March, the State Department said, “authorities demolished residences on private land that were being used as churches, one in Novorossiysk and one in Abinsk.”

Muslims, too, find their need for new sacred spaces to be blocked by the government.

“As elsewhere in the world, the number of Muslims is growing in Russia today,” says Azamat Abdusalomov, deputy head of the international department of the Spiritual Assembly of Muslims of Russia. “There is a large influx of external and internal migration, [which presents] a need to increase the number of mosques in Moscow, St. Petersburg, Yekaterinburg and other cities.”

Moscow has more than a million Muslims and only four mosques.

“This issue requires attention and needs to be resolved,” Abdusalomov writes in an email. “The authorities do not want to resolve this issue and throw off this issue on Russian nationalism and other reasons, but, in fact, these issues could be resolved.”

More mosques are needed “because they have a well-established policy of preaching the correct Islamic education,” he says, to counter “extreme ideas” and instill “concepts of humanity and interfaith dialogue.”

Many Islamic migrants come from outside Russia, says Alexander Verkhovsky, director of the SOVA Center for Information and Analysis, a Moscow-based nonprofit organization that researches nationalism, racism and relations between churches and secular society. “The need to build a new mosque is very important to them.”

For Russian authorities, it’s a matter of control, Verkhovsky says. Fewer mosques makes it “easier to follow and check up on them and their activities.”

Jehovah’s Witnesses have faced the harshest opposition to their places of worship. Because the government has labeled the group an “extremist” religion, it has used the law to confiscate or close 700 Kingdom Halls across the country.

Could Mormon meetinghouses be next?

There have been “long delays or refusals to grant permits to construct church buildings in Russia since the early 1990s,” says David Stewart, an independent Latter-day Saint demographer and physician in Las Vegas.

When Latter-day Saints in St. Petersburg wanted to build their first meetinghouse in the 1990s on land the church owned, neighbors balked.

Russian Orthodox Church members and evangelicals from outside the area also protested, says Bishop Kirill Ananich of the Shuvalovsky Ward, or congregation, in St. Petersburg.

The opposition grew so strong that the plan had to be aborted and another site chosen.

“There was propaganda against it,” the bishop says. “The town they proposed as an alternative, Vyborg, was 120 kilometers away, but it was actually much better.”

Stewart was a missionary in St. Petersburg at the time and served in Vyborg for two months as the chapel was being built.

The church spent heavily on legal fees, the demographer says. “Church leaders viewed the construction of meetinghouses as an essential matter, which would allegedly fuel growth and promote member retention.”

Such permanent buildings also put down a topographical and psychological marker that Mormonism was there to stay.

It didn’t work out that way.

“Extensive anti-Mormon agitation took its toll,” Stewart says. “In 1993, there were four branches [smaller congregations] in Vyborg. After the chapel was completed, the branches were gradually consolidated due to member attrition. Today, there is just one ward.”

Still, Stewart adds, the fledgling faith needed to “obtain permanent meeting places as organizations we had rented space from gradually revoked leases under pressure from the Russian Orthodox Church.”

Today, there are three meetinghouses owned by the LDS Church in St. Petersburg, but they all have been reconfigured from another use.

Buying — and remodeling — existing buildings seems to be the pattern now, Stewart says. “It has drawn less attention and opposition than constructing free-standing churches.”

The Shuvalovsky Ward, for example, is in a warehouse-type building surrounded by apartments. Members enter from the back alley.

Once inside, though, it looks like other Latter-day Saint meetinghouses, with wooden pews, church-approved Jesus art and ample classroom space.

Stewart notes that the church wanted to build its own chapels, even though “tithes from the region are small.”

Operating costs that underlie the assumption that every congregation needs its own meetinghouse, he says, “are not sustainable with so few members.”

Stewart grasps the impulse, though.

“The church wants to have a physical footprint there,” he says. “Having a building legitimizes the church as a local institution with a history” — and a future.

Precisely. That explains why the Russian Orthodox Church resists construction of worship spaces for minority faiths.

A temple on the horizon?

When Nelson announced that a temple would be built in a “major” Russian city, Mikhail Kotov joked that he knew exactly where to put it — in the St. Petersburg fortress built by Peter the Great.

In the center is Sts. Peter and Paul Cathedral, where the czars are buried. It boasts a giant angel weather vane on its spire.

Kotov, a Latter-day Saint tour guide and returned missionary, quipped that citizens are used to seeing an angel, so why not a temple with Mormonism’s iconic Moroni statue?

Others imagine the Latter-day Saint “House of the Lord” rising in the capital of Moscow or in Saratov in southern Russia.

For now, most members venture to Helsinki, Finland, to participate in temple rites. (Unlike meetinghouses, temples are viewed by Latter-day Saints as houses of God, places where the devout take part in their faith’s most sacred ordinances, including eternal marriage.) The Kyiv (formerly Kiev) Temple is closer, but the political turmoil over Ukraine makes it dicier for members to travel back and forth.

Information about citizens cannot be kept on systems outside the country. The LDS Church’s computer system, where membership data and vast genealogical research typically are stored, is based in Salt Lake City.

Members search out their ancestors and then take their names to the temple to do vicarious religious rituals for them. But Russia will not allow personal family data to be gathered outside the country.

When Russians arrive in Helsinki, for example, the Finnish temple will not be able to pull up their membership records or recommends.

“We cannot use FamilySearch [the church’s genealogical arm], but we will come up with something else,” says St. Petersburg Stake President Boris Leostrin, who oversees a number of Latter-day Saint congregations. “This is something we have to learn.”

Such obstacles, he is convinced, “will strengthen us.”

“It is an aspiration, an intention, a desire,” he says. “But it’s hard to see that the temple project would be able to go forward.”

Indeed, a few weeks after Nelson’s startling announcement, apostle Dieter F. Uchtdorf flew to Russia to tamp down expectations and to deal with the Russian bureaucracy.

The temple announcement “is a historic one, and it’s a beautiful one,” Uchtdorf told Russian journalist and scholar Sergey Georgievich Antonenko, according to a church news release. “Up until now, if [members] wanted to go to the temple, they had to travel outside of Russia.”

Uchtdorf added: “We’re very grateful for Russia to be a country where religious freedom is established.”

The popular apostle assured the writer that Latter-day Saints are “law-abiding, wonderful citizens” who love the tradition and history of their country.

In talking about eventually erecting a temple in Russia, the charismatic German was upbeat. When the Latter-day Saints are ready, he said, “the temple will be ready.”

Nikogosyan says the apostle was “encouraging us to prepare ourselves spiritually.”

When the temple news first broke, Latter-day Saints speculated where it would be built and when. Now, she hears members asking: “What do we have to do to get ready?”

“The temple is a blessing for all society, not just members,” she says. “Anyone can take photos on the beautiful grounds.” It is not meant “to compete with the Orthodox.”

Nikogosyan understands the restrictions and barriers but remains hopeful.

“Nothing is impossible to God,” she says. “It all depends on us.”

END_OF_DOCUMENT_TOKEN_TO_BE_REPLACED 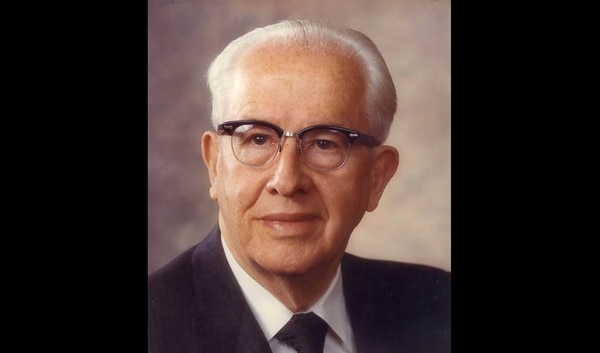 With rising COVID-19 cases inside the Vatican, pressure mounts for Pope Francis to don a mask
By Claire Giangravé | Relion News Service • 3d ago
END_OF_DOCUMENT_TOKEN_TO_BE_REPLACED
L