Sen. Mike Lee is willing to stand on principle. Utah’s soon-to-be senior senator is not one to act purely in the name of political expediency.

So it’s not surprising that Lee has decided to oppose a bill that would spend billions in federal money because it would be spending money the government doesn’t have.

Not surprising, but still disappointing. The bill in this case is a bipartisan effort to address the billions of dollars in maintenance work needed in the national parks, including the “Mighty Five” parks upon which Utah has built so much of its tourism economy.

The Restore Our Parks Act represents the rare alliance of Rep. Rob Bishop, Republican chair of the House Resources Committee, and Rep. Raul Grijalva, an Arizona congressman who is the ranking Democrat on Bishop’s committee. The rest of Utah’s congressional delegation is on board with the bill, as is the Interior Department.

Interior Secretary Ryan Zinke chose to highlight maintenance problems at Utah’s Zion National Park last month to promote the bill. A National Park Service report estimates the maintenance backlog at $13 billion across 417 park units. Utah’s share is $292 million, including $65 million in Zion alone. The bathroom fixtures in Zion’s South Campground were installed during the Eisenhower administration, more than a decade before Lee was born.

If it becomes law, Restore Our Parks would spend $1.3 billion a year to attack the backlog. The funding would come from federal energy revenue, mostly from oil and gas leases, which currently goes straight to the treasury.

“This bill is using money generated from public lands to do our stewardship responsibility providing for public lands,” said Bishop, who joined Zinke at Zion.

There is no increase in taxes or energy royalties, so Lee is correct that this is new spending without new revenue. Lee joined three other Republican senators in voting against the bill in the Senate Energy and Natural Resources Committee, but the bill still moved ahead on a 19-4 vote.

The nation will spend a trillion dollars more than it will raise this year, and Lee wants to draw the line on this tenth of a percent of that — a portion of which would provide tangible economic benefits in Utah. Any money spent in Utah parks is an investment in our future.

It’s not like Lee’s vote is decisive. He still can claim to be tight fisted, and Utahns won’t be hurt. But they haven’t been helped, either. Governing involves both principle and pragmatism. Utahns would benefit if Lee embraced more of the latter.

END_OF_DOCUMENT_TOKEN_TO_BE_REPLACED 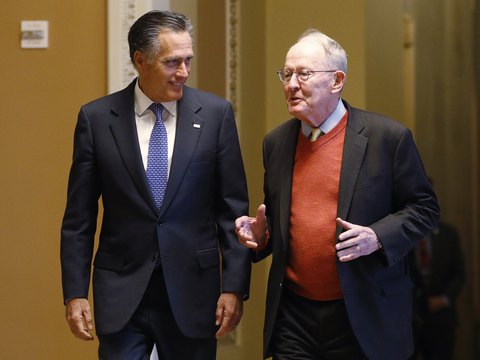 Scott D. Pierce: ‘Fresh Off the Boat’ is a little show that made a big statement about diversity. And it’s ending Friday.
By Scott D. Pierce • 47m ago

Disneyland’s Rise of the Resistance is unbelievably cool
By Scott D. Pierce • 47m ago