One pretty good forecasting rule for the coronavirus era has been to take whatever Trump administration officials are saying and assume that the opposite will happen. When President Donald Trump declared in February that the number of cases would soon go close to zero, you knew that a huge pandemic was coming. When Vice President Mike Pence insisted in mid-June that “there isn’t a coronavirus ‘second wave,’” a giant surge in new cases and deaths was clearly imminent.

And when Larry Kudlow, the administration’s chief economist, declared just last week that a “V-shaped recovery” was still on track, it was predictable that the economy would stall.

On Friday, we’ll get an official employment report for July. But a variety of private indicators, like the monthly report from the data-processing firm ADP, already suggest that the rapid employment gains of May and June were a dead-cat bounce and that job growth has at best slowed to a crawl.

ADP’s number was at least positive — some other indicators suggest that employment is actually falling. But even if the small reported job gains were right, at this rate we won’t be back to precoronavirus employment until ... 2027.

Also, both ADP and the forthcoming official report will be old news — basically snapshots of the economy in the second week of July. Since then much of the country has either paused or reversed economic reopening, and there are indications that many workers rehired during the abortive recovery of May and June have been laid off again.

But things could get much worse. In fact, they probably will get much worse unless Republicans get serious about another economic relief package and do it very soon.

I’m not sure how many people realize just how much deeper the coronavirus recession of 2020 could have been. Obviously it was terrible: Employment plunged, and real GDP fell by around 10%. Almost all of that, however, reflected the direct effects of the pandemic, which forced much of the economy into lockdown.

What didn’t happen was a major second round of job losses driven by plunging consumer demand. Millions of workers lost their regular incomes; without federal aid, they would have been forced to slash spending, causing millions more to lose their jobs. Luckily Congress stepped up to the plate with special aid to the unemployed, which sustained consumer spending and kept the nonquarantined parts of the economy afloat.

Now that aid has expired. Democrats offered a plan months ago to maintain benefits, but Republicans can’t even agree among themselves on a counteroffer. Even if an agreement is hammered out — and there’s no sign that this is imminent — it will be weeks before the money is flowing again.

The suffering among cut-off families will be immense, but there will also be broad damage to the economy as a whole. How big will this damage be? I’ve been doing the math, and it’s terrifying.

Unlike affluent Americans, the mostly low-wage workers whose benefits have just been terminated can’t blunt the impact by drawing on savings or borrowing against assets. So their spending will fall by a lot. Evidence on the initial effects of emergency aid suggests that the end of benefits will push overall consumer spending — the main driver of the economy — down by more than 4%.

Paul Krugman: The cult of selfishness is killing us

Paul Krugman: Why can’t Trump’s America be like Italy?

Put it all together and the expiration of emergency aid could produce a 4-5% fall in GDP. But wait, there’s more. States and cities are in dire straits and are already planning harsh spending cuts; but Republicans refuse to provide aid, with Trump insisting, falsely, that local fiscal crises have nothing to do with COVID-19.

Bear in mind that the coronavirus itself — a shock that came out of the blue, although the United States mishandled it terribly — reduced GDP by “only” around 10%. What we’re looking at now may be another shock, a sort of economic second wave, almost as severe in monetary terms as the first. And unlike the pandemic, this shock will be entirely self-generated, brought on by the fecklessness of Trump and — let’s give credit where it’s due — Mitch McConnell, the Senate majority leader.

The question is, how can this be happening? The 2008 financial crisis and the sluggish recovery that followed weren’t that long ago, and they taught us valuable lessons directly relevant to our current plight. Above all, experience in that slump demonstrated both that economic depressions are no time to obsess over debt and that slashing spending in the face of mass unemployment is a terrible mistake.

So at the moment we seem to be headed for a Greater Recession — a worse slump than 2007-2009, overlaid on the coronavirus slump. MAGA!

END_OF_DOCUMENT_TOKEN_TO_BE_REPLACED 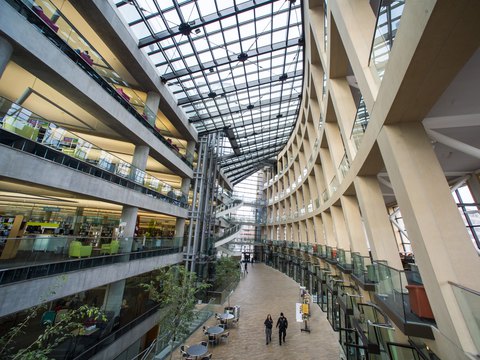 Letter: Libraries should be open
By Michael Locklear | The Public Forum • 22h ago
END_OF_DOCUMENT_TOKEN_TO_BE_REPLACED
L