Diane Coyle: Why did it take a pandemic to show how much unpaid work women do?

Women’s shift into paid employment in the 20th century was one of the great economic transformations in recent history. Families began buying goods such as convenience foods, vacuum cleaners and microwaves to substitute for women’s unpaid labor at home. That shift in what households buy was a primary reason for the post-World War II boom in economic growth in the United States and other rich countries.

In the United States, this transition started in the early 1960s, when just over four in 10 American women went out to work, and continued until 1997, when the proportion reached just over six in 10. The shift was even more pronounced in some other Western economies. Women’s employment rate stabilized in the United States but has continued to increase elsewhere, reaching nearly seven in 10 in the other major world economies.

But while the growth in consumer spending thanks to working women is well documented, there is another part of this story that has been largely ignored by economists: the persistence of unpaid work done by women. Even as more women have gone out to work over time, they have continued to do the “second shift.” Women take on more of the domestic labor and volunteering in the community than men, and they have less leisure time. In fact, women who work in paid jobs outside the home spend more time each week on chores at home than do men who do not go out to work.

Economists have long acknowledged that gross domestic product — the most widely accepted measure of economic progress — excludes all of this work, which is vital to the functioning of the global economy. But this huge gap has rarely seemed important in the heavily male-dominated profession of economics.

That is finally beginning to change. The question of what counts in “the economy” is no longer posed only by feminist scholars; it is being examined by economists in general, including those who define the statistics used to measure growth. That’s because digital technology is changing the boundary between what we pay for in the market and what we do free in the home — for men as well as women.

Economists call the line between paid and unpaid work the “production boundary.” Increasingly, the ordinary activities of life involve crossing that boundary. When I use online banking to deposit a check or when I book my own hotel room, I am crossing the production boundary, substituting my own unpaid work for the paid work of bank tellers or travel agents. None of this unpaid work is counted directly in gross domestic product.

Similarly, many free online products — like TikToks, Wikipedia entries and social media posts — are substitutes for purchased equivalents in the media and entertainment. Millions of us donate our work to amuse or inform others, in a parallel economy in which others pay with their attention.

The digital economy, like the offline household and volunteer economy, is linking us in exchanges that are hard to measure in traditional economic terms, although they create much unpaid value. These activities do create a lot of monetary value for the owners of digital platforms, and that is included in formal measures of the economy, but everything that falls on the wrong side of the production boundary — all that unpaid digital work — is uncounted.

This situation now seems untenable. During the pandemic and subsequent lockdown, in many places much of the activity counted in GDP has come to a sudden stop. Yet it is clearer than ever how much time we are spending on the “wrong” side of the production boundary. Online traffic is as much as 30 percent higher in some regions since the beginning of the pandemic, and households in lockdown are spending many more hours on the unpaid domestic work of cooking, cleaning and child care.

Women seem to be disproportionately bearing the extra burden. In addition to their doing more of the unpaid work at home, their economically valuable work outside the home is suffering, as they are forced to substitute unpaid work for paid work — reversing a decades-long trend. Women have been the main providers of child care while schools have been closed, and mothers working from home are almost twice as likely as men to have reduced their working hours, with the biggest decline in hours found among college-educated women.

At the same time, women are losing ground in paid employment. The sectors of the economy that are most affected by the pandemic, such as retail and hospitality, disproportionately employ women. In the United States, the unemployment rate for women has risen by nearly three percentage points more than men’s; in Britain, mothers are more likely than fathers to have lost or quit their jobs. It is not just women who are being harder hit; the U.S. unemployment rate is significantly higher for Hispanic and African-American people than it is for whites.

Jamelle Bouie: If you want to let freedom ring, hammer on economic injustice

The striking disjunction between what we pay for and count in GDP and what is valuable or “essential” to our lives is now unavoidable. But so far there seem to be few options for doing something about it, other than applauding essential workers or paying for advertising to salute them.

Those lucky professionals who can work at home continue to be paid, generating profits for the absurdly well-paid owners of their companies, but they, too, are doing more unpaid work at home and spending less money in the “official” economy. It may seem as if lockdown has caused an overall slowdown in all kinds of work, but as long as this shift toward unpaid work continues, income inequality — which was high even before the pandemic — will continue to worsen.

There are ways to change course. Increases in the minimum wage, limits on executive pay and tougher antitrust policies, which would reduce corporate power, would not take long to reduce inequality of income. Scandinavian countries not only have higher wage rates for low-paid jobs but also provide support for families, including generous parental leave and subsidized day care, to ensure that the burden of unpaid work does not fall largely on women. Introducing a universal basic income — usually defined as a guaranteed income provided by the government for every adult and child — would also be a recognition of the value of the essential unpaid work that everyone does, even those who are not part of the “paid” economy.

It will take more than policies such as these for us to learn how to value what is truly worthwhile in the economy. Monetary transactions alone are an incomplete measure of economic value. They always were, as the creators of GDP accepted, but economists and policymakers have long downplayed this shortcoming. Now, as the digital shift and the lockdowns have brought “the economy” into our homes, these fundamental questions are impossible to ignore. A broader measure of progress could reshape the way we choose to organize society by validating the valuable work that counts for little, or nothing, in our current system.

Diane Coyle is a professor of public policy at the University of Cambridge and the author of “Markets, State and People: Economics for Public Policy.”

END_OF_DOCUMENT_TOKEN_TO_BE_REPLACED 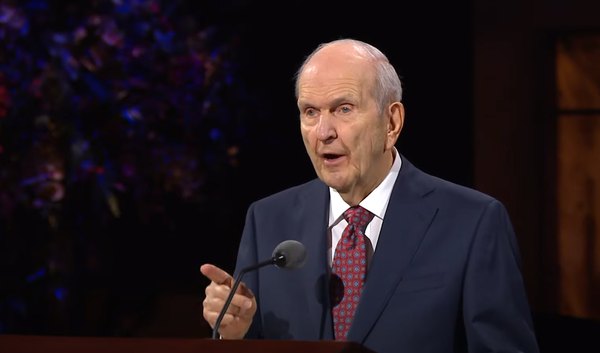 Tamsen Maloy: Gratitude is nice, but it isn’t enough
By Tamsen Maloy | Special to The Tribune • 3h ago

Maureen Dowd: The Lady and the Trump
By Maureen Dowd | The New York Times • 14h ago

Letter: The ‘R’ is all that matters
By Barbara Watkins | The Public Forum • 25m ago