Leonard Pitts: Aunt Jemima is off the pancake box

“I wish knew how it would feel to be free”

Okay, so you're not laughing. But that joke killed in 1969 on the playground at Adams Junior High. What self-respecting black kid wanted his mama likened to the handkerchief-head mammy who beamed from the box of pancake mix?

Leonard Pitts: Basketball would distract us from the serious issues we face. And that would be great!

Leonard Pitts: Don’t say, ‘I am not a racist’

Leonard Pitts: No one has made a stronger case against the police than the police

Leonard Pitts: First Amendment has no meaning ... unless

Leonard Pitts: We don’t have a few bad apples. We have a rotten tree.

Now comes word Aunt Jemima will no longer be “on the pancake box.” She’s going away, and Uncle Ben, Mrs. Butterworth and “Rastus” from Cream of Wheat may soon follow.

Meantime, the NFL now admits it was wrong to ignore racism, Commissioner Roger Goodell even going so far as to support the idea of Colin Kaepernick playing football again. NASCAR has banned the Confederate flag and statues of Confederate heroes are falling like rain. Massive crowds of people, many white, have been marching and chanting against police brutality and talk of reform is so pervasive even Donald Trump felt compelled to issue an executive order, weak tea though it was. On late-night talk shows, discussions of racial justice have all but replaced movie promotions. White Americans are asking hard questions about white privilege and — in a miracle on par with the loaves and fishes — many appear, for the first time, to be listening to the answers.

One scarcely knows what to make of it all. Mind you, we have not reached "the Promised Land" Martin Luther King famously prophesied. But it's obvious something new is happening.

The proximate cause is simple: the murder of George Floyd. As all the world knows, he died after eight minutes and 46 seconds with his cheek on the pavement and a white cop's knee pressed to his neck. Via cellphone video, we all stood witness.

That clip left us — apologies to Martha Reeves — nowhere to run, nowhere to hide from the stark truth it told. We had seen other clips, yes, but they were often grainy images captured from a distance, and thus, they provided an escape hatch for those who were so inclined, room for them to avoid knowing what they did not wish to know. But Floyd’s death was up close and in focus. We heard him repeatedly plead for his life. And, too, we clearly saw on the face of the white Minneapolis cop Derek Chauvin, the arrogance of a man confident that even if he grinds out a black man’s life in broad daylight on a public street, accountability will never call his name.

Is the change real? Will it last? One is scared to hope. And with good reason.

African-American history, after all, is a litany of hope crushed to Earth and forced to rise again. This very weekend commemorates Juneteenth — June 19, 1865 — when black people in Galveston became the last human property to receive word that they were free. The Ku Klux Klan was formed later that same year.

That's the story of Reconstruction and the Civil Rights movement, of Barack Obama's election and the brutal pushback that followed. There's every reason to fear it will be the story here, too.

But Aunt Jemima is off the pancake box and decent white people are grappling — really grappling — with their role in a system that advantages them by grinding down the rest of us.

One is scared to hope. One knows better than to hope.

And yet, one hopes just the same.

END_OF_DOCUMENT_TOKEN_TO_BE_REPLACED 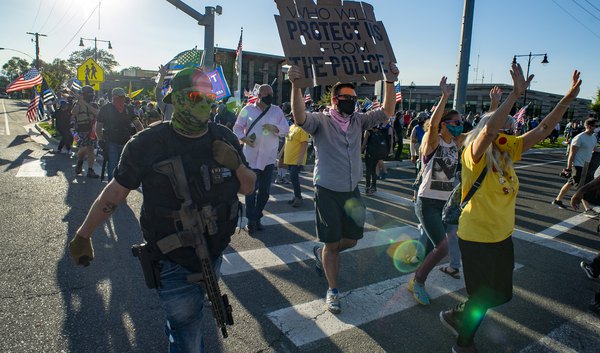 Letter: It’s not safe to reopen schools yet
By Marty Bernstein | The Public Forum • 17h ago
END_OF_DOCUMENT_TOKEN_TO_BE_REPLACED
L