Monica Hesse: How I learned to stop worrying and love ‘White Christmas’

While the rest of you get sucked into "The Christmas Prince" sequel or debating whether one can enjoy "Love, Actually" in a post-#MeToo era, a small subset of the rest of us must now retreat to a snow-starved Vermont inn and discuss a more ancient cinematic matter:

“White Christmas,” the 1954 battle ax of holiday classics, which already reigns over basic cable this time of year, is returning to the big screen — part of a nationwide Turner Classic Movies promotion on Dec. 9 and 12.

Frankly, it’s a bit of a weird movie to have achieved such stature in the Christmas pantheon. There are no cute child stars and no Santa Claus — but there is a modern dance sequence in which Danny Kaye runs around with a bunch of barefoot women in gray tunics. There’s also Bing Crosby improvising a monologue about liverwurst sandwiches, some bombs falling on World War II Europe, and composer Irving Berlin painting himself into lyrical corners resolved by rhyming “finger” with “humdinger.”

"I saw you put (the tickets) in your pocket!" Crosby accuses Kaye after they've cross-dressed their way out of a jam and then escaped on a train. "I must have left them in my girdle," Kaye replies. The movie really only meanders into Christmas territory in the last scene. Most of the plot focuses on Crosby and Kaye as Army buddies turned entertainers trying to save a struggling ski lodge owned by their former general.

For the “White Christmas” obsessives among us, the internet has opened rabbit holes: We can report that co-star Vera-Ellen does, in fact, wear turtlenecks in every single scene — the fan theory is that an eating disorder prematurely wrinkled her neck. But we’ll also report that a year after “White Christmas,” she was photographed at a different movie premiere and her exposed neck looked smooth — so, who knows?

What is the greater meaning of "White Christmas"? Is it even worth dissecting, or should we admit that it's best appreciated as gift-wrapping background noise?

Suffice it to say, if you've read this far, you might be open to exploring.

The main things a modern viewer might notice about "White Christmas" are what a modern viewer might notice about any 64-year-old movie: the dated, cringey stuff. The 25-year age gap between Bing Crosby and love interest Rosemary Clooney, for example. Or the fact that while the characters blessedly do not put on a blackface minstrel show, as they did in the movie's spiritual predecessor, "Holiday Inn," they do perform a new number in which they sing about how much they like watching minstrel shows.

A cynic, meanwhile, could argue that the movie's central quest is merely one long capitulation to male fragility. The retired general, an older man suffering economic anxiety, if you will, worries that he's no longer as respected or vital as he once was, and so hundreds of other people put aside their own holiday plans and come to Vermont to bathe him in adoring nostalgia.

But meanwhile, Vera-Ellen and Danny Kaye in "The Best Things Happen While You're Dancing" is one of the greatest dance sequences ever to appear on screen.

And meanwhile, good luck not tearing up at the end.

“White Christmas,” like a lot of holiday classics that get replayed on your TV every year, has an awful lot of “meanwhile.” Moments wherein we, the viewers, are forced to encounter our country’s complicated history, right alongside medleys of our most cherished songs sung by our most beloved stars. An awful lot of moments that get so much right, but meanwhile getting so much wrong. In the same way that “Baby, It’s Cold Outside” is now dragged as a ballad of rape culture — but meanwhile, it remains compulsively hummable.

To experience a beloved classic at Christmas is to be confronted by the darker side of our own nostalgia. How much do we excuse because "times were different"? How much do we boycott?

I'm thinking of this in a week in which the nation mourns a former president, a very old man who came of age in the 1940s, whose legacy of public service was complicated at the end of his life by multiple allegations that he'd groped women's rear ends while posing for photographs. Was this a corny joke? Or harassment? A corny joke we'd now recognize as harassment? How do we reconcile our thoughts about him?

I've seen "White Christmas" at least 20 times, but it had been a few years. So when I queued it up this week it was with a sense of dread, trying to remember what corny, problematic jokes I'd earlier ignored or let sail over my head. Trying to figure out how to deal with 1954 in 2018.

I wonder whether one answer lies in a throwaway line delivered by a throwaway character — a line I’d never even paid attention to before. Crosby and Kaye have contacted a television host, asking for his help in honoring the general. “I love the idea of doing something for the old man,” the host agrees. “If it weren’t for him, I wouldn’t know how to peel a potato.”

And you know what? Bless this fictional 1954 man for having kitchen skills. Bless the fictional general for teaching him. Bless the Army for instilling domestic know-how in these male characters; in another scene, the general obligingly announces that he's on KP duty.

Moments like that are how social change are made: Cleaning and root vegetable preparation aren't lady skills, they show us, but life skills.

Once you notice that line, you'll latch onto other moments. Kudos to Vera-Ellen's character for deciding that her own career was important and valuable. And for boldly making the first move in her flirtation with Kaye. His character then demures so vehemently that, the "White Christmas" message boards have speculated that the character might be gay. Well, if so, kudos to that subversive choice, too.

When we talk about old relics of our culture, it's easy to talk about them in a way that's black and white: to shun them or praise them. To denounce them, or to defend them and accuse everyone denouncing them of being sensitive snowflakes.

Around the holidays, denouncers and defenders often end up sitting side by side on family sofas, watching the same movies and seeing completely different things.

To the defenders on one side of the sofa, here’s a reminder that it’s possible to love something deeply — obsessively, even — and, because you love it so much, to wish that it were better. To point out its flaws, and demand its improvement. It’s true of old movies, it’s true of historical figures, it’s true of culture, it’s true of America.

To the denouncers on the other side: Remember the potato peeling. In moments of extreme stress, look for the moments when the men of 1954, real and fictional, were overjoyed to learn how to peel a potato. There was hope. Everyone could come together to save the hotel and the kind old general. It would snow at the end.

Monica Hesse is a columnist for The Washington Post’s Style section and author of “American Fire.”

END_OF_DOCUMENT_TOKEN_TO_BE_REPLACED 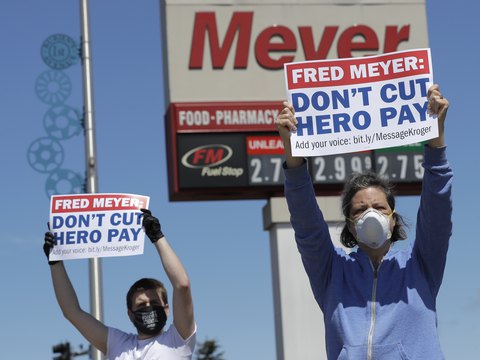 Letter: We can be selfish or be caring
By Michael Feldman | The Public Forum • 16h ago
END_OF_DOCUMENT_TOKEN_TO_BE_REPLACED
L