Utah’s legislative leaders have sent President Donald Trump a citation letter that commends him for everything from his efforts to “secure our national borders" to his move to relocate a U.S. Embassy from Tel Aviv to Jerusalem.

The message concludes by exhorting Congress to “do what state legislatures across the country are doing and get back to work for the American people.”

Senate President Stuart Adams and House Speaker Brad Wilson wrote the commendation as the dust settles around Trump’s impeachment trial and U.S. Sen. Mitt Romney’s vote to remove the president. While Rep. Phil Lyman had proposed censuring Romney — who was the only Senate Republican to vote for Trump’s conviction — Adams, R-Layton, and Wilson, R-Kaysville, shied away from admonishing the senator and instead favored a show of support for the president.

The citation praises Trump for a whole sweep of actions affecting the nation as a whole and Utah specifically — including the president’s decision to slash the size of Bears Ears and Grand Staircase-Escalante national monuments. It also credits Trump for policies that have fostered Utah’s low unemployment and economic prosperity.

“We’re all experiencing, at least nationally, a great economy because of a great president,” Adams, an early supporter of Trump, told reporters Thursday.

State officials have already shared a digital version of the citation with the White House and are mailing another copy accompanied by a letter. They had considered reading the citation in front of the full House and Senate but decided against that “out of respect for our colleagues,” Adams said.

Speaking to reporters, Sen. Jani Iwamoto, D-Salt Lake City, said she hadn’t yet seen the commendation but appreciated legislative leaders’ efforts to be positive and respectful to colleagues with differing opinions.

“Sending such a divisive message at this time for a president who has record-low approval numbers for a Republican in Utah is not what we were elected to do,” the caucus said in a statement.

The Democrats also contended the citation broke legislative rules reserving these commendations for Utahns. House rules define a citation as a certificate honoring one or more Utahns or expressing condolences to the family of someone who has died. The Senate definition doesn’t specifically mention the recipient’s state of residence, although it appears in a chapter about commending or expressing condolences to Utah residents.

A Senate spokeswoman said the citation did not violate the chamber’s rules.

Alliance for a Better Utah, a group that advocates for progressive policies, interpreted the citation as an attempt to keep Trump’s wrath at bay.

“This desperate attempt to mitigate the fallout from Senator Romney’s vote is not normal or acceptable behavior. Utahns will remember the courage of Sen. Romney in honoring his sacred constitutional oath," Chase Thomas, the alliance’s executive director, said in a prepared statement. “And it will also remember the cowardice of the lawmakers who threw him under a bus to side with a bully instead.”

House leaders have said they will not advance the censure resolution brought forward by Lyman, a Blanding Republican. Meanwhile, the Utah Republican Party’s state central committee is slated to take up its own drafted resolution aimed at censuring Romney and urging his loyalty to Trump.

A separate legislative bill, proposing to authorize voter recall of a U.S. senator, has been stuck in the House Rules Committee for weeks since Wilson and Adams expressed opposition to it. The sponsor, Rep. Tim Quinn, R-Heber City, said his bill was unrelated to Romney’s vote to oust Trump, although the proposal attracted greater interest after the senator’s decision.

END_OF_DOCUMENT_TOKEN_TO_BE_REPLACED 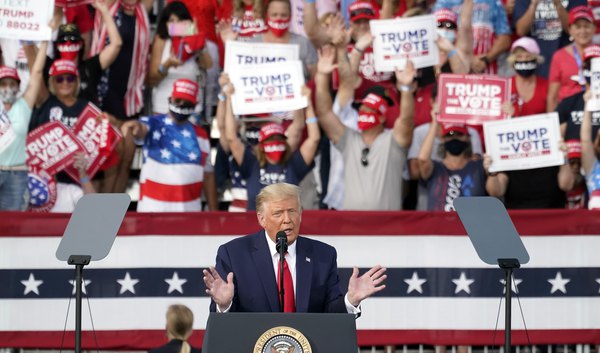 Letter: Work together to fix what is broken
By Marilyn Marshall | The Public Forum • 34m ago