After President Donald Trump said Thursday that Joe Biden "was only a good vice president because he knew how to kiss Barack Obama’s ass,” Biden fought back with a tweet just before midnight. “I spent my night at the HRC forum talking about the fundamental respect every human being deserves. You spent yours showing how little respect for anyone else you have. America is so much stronger than your weakness.” [TheHill]

Topping the news: Sen. Mitt Romney says everybody knows it is wrong to ask a foreign government to probe a political rival, but says he has not talked with other senators about impeachment of President Donald Trump. [Trib] [DNews]

-> Salt Lake City mayoral candidates spar in a debate over their records on the inland port. [Trib]

-> Utah leaders have created a strategic plan they hope will help make a homeless person’s time on the streets “rare, brief and nonrecurring.” [Trib]

Tweets of the day: From @BjaminWood: “State Sen. Cullimore says that high school kids don’t call them ‘bathrooms’ any more, they call them ‘vape rooms.’ Any high school-aged tweeps who can confirm?”

-> From @mattpacenza: “Actually, yes. My teenage son makes this joke. I won’t say which school. He extends the joke to saying, when he does go to the bathroom, he’s asked, ‘Why are you peeing in the vape room?’”

-> From @DylanCMcDonnell: “Interesting. I’ve heard Utahns don’t call it the ‘State Senate’ anymore, they call it ‘The anecdotal echo chamber.’”

Behind the Headlines: Tribune reporter Taylor Stevens, government and politics editor Dan Harrie and columnist Robert Gehrke join KCPW guest host Marcie Young Cancio to talk about the week’s top stories, including the intensifying race for Salt Lake City mayor and the heated war of words between the president and Senator Mitt Romney.

Every Friday at 9 a.m., stream “Behind the Headlines” at kcpw.org, or tune in to KCPW 88.3 FM or Utah Public Radio for the broadcast. Join the live conversation by calling (801) 355-TALK.

News Quiz: Last week, 91% of you know off-road vehicles will be allowed in Utah’s national parks, but only 37% of you know Rush Limbaugh claimed Utah Sen. Mitt Romney told House Speaker Nancy Pelosi that the Senate had enough votes to remove President Trump from office. Think you kept up with the news this week? Take our quiz to find out. [Trib]

Also in the news: The newly appointed Utah Inland Port Authority Board executive director said the public’s view will help to shape the project. [Trib]

-> A Lehi official has been fired amid an investigation of up to $791,000 that was paid to a business owned by the official’s cousin for materials that apparently were never delivered. [Trib]

-> If you vape, Utah experts warn that you should watch out for severe flu symptoms — which can be similar to deadly vaping problems. [Trib]

-> After her first and only term as Salt Lake City’s first openly gay mayor, Jackie Biskupski is reflecting on her triumphs and regrets. [KUER]

-> The attorney general’s office is weighing in on a case regarding the issue of transgender people’s gender marker changes on birth certificates following an order from the Utah Supreme Court. [Fox13]

-> Trump lashed out against Democrats at a combative campaign rally on Thursday night. He said Joe Biden "was only a good vice president because he knew how to kiss Barack Obama’s ass.” [NYTimes]

-> Ahead of that rally, President Trump bickered with Minnesota officials and threatened to sue the Target Center in Minneapolis, where the rally was held. [CNN]

-> Following a subpoena by the House earlier this year, Deutsche Bank told federal appeals court that it does not hold Trump’s tax returns. [CNN]

-> Trump is awarding a posthumous pardon to a leading metal scientist whose work helped secure an Allied victory in World War II. [AP]

-> Abiy Ahmed, the prime minister of Ethiopia, was awarded the Nobel Peace Prize on Friday, for his work in restarting peace talks with neighboring Eritrea, ending a long stalemate between the two countries.[NYTimes]

END_OF_DOCUMENT_TOKEN_TO_BE_REPLACED 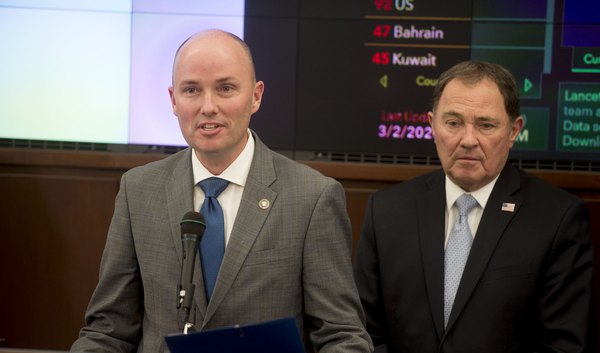 Here’s how coronavirus compares to other leading causes of death in Utah and the U.S.
By Andy Larsen • 47m ago