A new poll shows just how divided Utahns are on Trump, the border wall and who’s at fault for the shutdown

Washington • President Donald Trump lost the shutdown fight, ending the 35-day impasse without any of the border wall money he sought.

But Utahns are split on whom to blame for the longest government shutdown in American history. And as for that continuing border wall fight? They’re divided on that, too.

A new poll by The Salt Lake Tribune and the University of Utah’s Hinckley Institute of Politics shows half of Utahns believe Trump caused the shutdown and the other half say congressional Democrats are most at fault.

Utahns’ views differ from those of most Americans, as reflected in national polls showing a clear majority point the finger at Trump — who last month had proudly declared the shutdown would be his to own, and whose support has been dropping. In the Beehive State, there’s no sign of a hit to Trump’s approval ratings, which remain about the same as they’ve been since his inauguration.

The Tribune-Hinckley Institute survey shows 49 percent of Utahns disapprove of Trump’s job performance, while 48 percent approve, a statistical tie given the poll’s margin of error of plus or minus 4 percentage points.

Jason Perry, the head of the Hinckley Institute, says the poll shows Utahns are frustrated.

“Utahns clearly support the need for border security but are not united on how best to provide it,” Perry said. “One thing they do agree on is that President Trump and congressional Democrats are equally to blame for the shutdown.”

The poll shows a gender gap in Utah. A plurality of men blame congressional Democrats for the shutdown, while more women blame the president than Democrats. Men support a border wall, women oppose it. And a majority of men approve of Trump’s performance while a majority of women disapprove.

Utah, a deep-red state that typically gives Republican presidents high marks, has never been a big fan of Trump. He won the state, but not with a majority of voters, and he’s never seen an approval rating higher than the low 50s since his election.

Still, the president enjoys a following in Utah that he’s not seeing across the rest of the country.

A Washington Post-ABC News poll showed Friday that disapproval of Trump has risen to 58 percent from a previous high of 53 percent in November. Some 37 percent of Americans give Trump good ratings, one of the lowest marks in his presidency.

“Utah has seen a slow decline in support for the president, but not nearly the same type of disapproval ratings as with the rest of the country,” Perry says. “Utah Republicans remain strong, voters have not blamed him for the shutdown and this may be shielding the president’s approval ratings from dipping further.”

Sen. Mitt Romney, a Utah Republican who has been intermittently critical of Trump and crossed party lines last week to support a Democratic measure to reopen the government, says he’s not focused on polling data and that it shouldn’t be a factor.

“I must admit that polls in our country move so quickly and attitudes change so dramatically over time,” Romney said in an interview. “I don’t think polls have much impact right now on how people are acting. After all, we’re a long way to the next election.”

It’s unclear if polls had any meaningful impact on Trump’s capitulation on the shutdown.

The president had tweeted many times that he wouldn’t cave to Democrats on his demand for a border wall, but eventually agreed to a three-week stopgap bill that had zero funding for the wall that he promised multiple times in his campaign would be paid for by Mexico.

Romney said the president’s three-week reopening of the government amounted to him “calling the Democrats' bluff” to negotiate in good faith over border security with federal employees back at work.

Sen. Chris Murphy, D-Conn., tweeted Friday that Trump had lost, given the Senate had passed — by voice vote — the same package that the president now signed.

“So Trump is agreeing to the EXACT SAME DEAL he rejected 35 days ago,” Murphy tweeted. “What a debacle. I’m so so sorry, America.”

Senate Democratic leader Chuck Schumer of New York said Friday that he was relieved Trump had given in and said he hopes Trump will learn from the shutdown.

“The American people do not like it when you throw a wrench into the lives of government workers over an unrelated political dispute,” Schumer said. “Hopefully now the president has learned his lesson.”

The Utah poll shows the splintering of residents based on partisanship over Trump.

Some 41 percent of voters who identify as Republican say they strongly back the president and 33 percent somewhat approve, while 94 percent of Democrats strongly oppose him. About 48 percent of unaffiliated voters, the second-largest bloc of voters in Utah, also strongly disapprove of Trump’s job performance, with 10 percent saying they somewhat disapprove.

The Tribune-Hinckley Institute survey also shows the deep divide of the country.

On the opposite end, 90 perce­nt of those surveyed who consider themselves very liberal oppose the president with another 3 percent somewhat opposed to him.

“I think ultimately the American people will figure that out. If you run these negotiations purely based on polls, we never get anywhere,” Chaffetz said. “I think [Americans] want to see their government working and functional.”

The survey of 604 Utahns was conducted by The Salt Lake Tribune and the Hinckley Institute of Politics between Jan. 15 and 24. The margin of error is +/-4 percentage points.

Commentary: General Conference would be a good time for the LDS Church to apologize to the Black com

END_OF_DOCUMENT_TOKEN_TO_BE_REPLACED 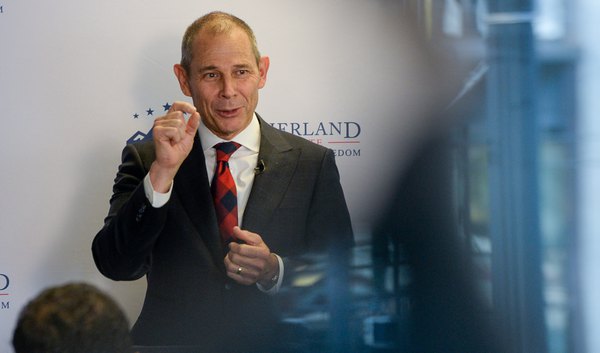 Angry opening: Trump, Biden lash, interrupt each other
By Jonathan Lemire, Darlene Superville and Will Weissert | The Associated Press • 3h ago

‘Utah Politics’ podcast: Understanding why the GOP went from Reagan to Trump, and how to moderate a presidential debate
By Bryan Schott • 3h ago
END_OF_DOCUMENT_TOKEN_TO_BE_REPLACED