Gehrke: It’s time to get rid of straight-party voting

On Election Day, the Salt Lake County recorder’s race is not really the marquee matchup.

Without much to go on, voters usually re-elect the incumbent, to the point that Gary Ott was re-elected as recorder in 2014, despite some indications at the time that he was suffering from the early stages of dementia.

This year was different. Adam Gardiner, a former Republican state representative who was chosen to replace Ott, lost his re-election bid to Rashelle Hobbs.

Now, I don’t want to take anything away from Hobbs — she campaigned hard, got more votes and won the race, fair and square. I have no doubt she will do a fine job of doing whatever it is a county recorder does.

But it does point to an issue that has needed to be addressed for years, and that is straight-party voting — when a voter can fill in one bubble on a mail-in ballot or push one button on a machine and select every candidate on the ballot from a given party.

This year, it meant that every Salt Lake County Democrat running countywide basically got a head start of 14,000 votes, since that’s about how many more Democrats in the county voted straight party than Republicans.

It’s part of the reason we saw races we might have expected to be reasonably close — like Republican Sophia DiCaro vs. Jim Bradley in the race for the at-large County Council seat — end up not close. (Full disclosure, my sister ran for County Council and benefited from this same phenomenon). And it certainly boosted Ben McAdams in his Salt Lake County stronghold as he beat incumbent Rep. Mia Love.

Finally, there could be a serious push this year to get rid of straight-party voting.

“Candidates spend thousands of dollars and hundreds of hours trying to get their name out there just to have people check one box without actually researching candidates,” Gardiner said. “Republicans and Democrats need to vote for candidates, not parties. Voters and candidates deserve better.”

Democrats in the Legislature have been trying to get rid of straight-ticket voting for years. Going back to 2002, Rep. Trisha Beck sponsored legislation to do away with the practice. In 2005, Rep. LaWanna Shurtliff sponsored similar legislation. In 2013 and 2016, Rep. Patrice Arent gave it a shot.

Each time, despite support from groups like the League of Women Voters, the efforts came up short, thanks to opposition from the Utah Eagle Forum and the Utah Republican Party.

That’s because, while Democrats have typically gained a small advantage from straight-party voting in Salt Lake County — one that ballooned with high liberal turnout this election — they get slaughtered in every other county, losing 2-to-1.

It’s ironic. And unfortunate, because with a Republican sponsor, the bill had its best chance to pass. And Cutler had good, politically neutral logic behind his case.

It used to be, Cutler told me, voters would get into the polling places on Election Day and get blindsided by a race they knew nothing about — maybe the recorder’s office is a good example. In those instances, one could have argued that straight-ticket voting might make some sense.

But with the advent of mail-in ballots this year, now voters can spend weeks researching the candidates, he said. The state publishes voter guides, candidates all have websites. There is information to be had.

If voters still want all Republicans or all Democrats, they can still vote for them all, which is what Cutler said he did. If a voter doesn’t have an opinion, he or she can leave it blank.

With Cutler out, Arent announced Wednesday she would once again try to repeal straight-party voting, which she said “denies good candidates in both parties the opportunity to receive fair consideration by voters.”

Utah is just one of seven states that still allows straight-party voting, according to the National Conference of State Legislatures. Texas held its last election with it this year and Michigan, Iowa, Rhode Island, New Hampshire and West Virginia have all done away with the practice since 2015.

Straight-party voting no longer serves a purpose, if it ever did, and legislators from both parties should unite to get rid of it.

Our system should encourage voters to thoughtfully consider and choose the best candidate, not facilitate and reinforce the blind devotion to party labels that has polarized our politics and undermined a representative democracy for too long.

END_OF_DOCUMENT_TOKEN_TO_BE_REPLACED Robert Gehrke: For the first time in my life, I belong to a political party — and here’s why you should, too
By Robert Gehrke • 15h ago 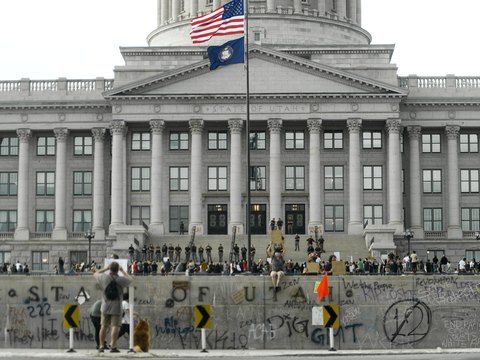 END_OF_DOCUMENT_TOKEN_TO_BE_REPLACED

Mountain West to eliminate some postseason tournaments, make other budget cuts
By The Associated Press • 18m ago