Salt Lake City will back out of a $7 million property purchase on Simpson Avenue after deciding late last week that the site is no longer needed for a homeless shelter.

City spokesman Matthew Rojas said Tuesday the city's contract with the owners of 2.8 acres, including a 653 E. Simpson Ave. day care, allows the city to cancel for any reason, at its sole discretion.

The city will forfeit an earnest money deposit of $10,000.

Representatives of Forest Co., which owns the property, did not immediately respond when asked for a comment.

City officials for months defended the former shelter site — which includes four commercial tenants and abuts a neighborhood of single-family homes — as ideal for a population of homeless families.

Data showed a currently operating shelter in Midvale would suffice for homeless families, officials said, and it would be more economical to build three 200-bed shelters than the four 150-bed shelters proposed for sites in Salt Lake City.

The county also agreed to find a place for a shelter outside of Salt Lake City, cutting the city's commitment from four sites to two. The city chose to scrap the Simpson Avenue location and another on city-owned land at 648 W. 100 South, not far from the current homeless shelter.

Leaders have said their decision to reset wasn't motivated by the public outcry from residents and business owners near 653 E. Simpson Ave.

McAdams had characterized the purchase as too costly, saying stakeholders had planned to spend $1 million to $2 million per site and that the city would not be fully reimbursed from an expected $27 million in state funding.

The city had countered by saying only a portion of the land would be required for the shelter and that acquired land on the south side of Simpson Avenue might be used for a development that included affordable housing.

Multiple City Council members said after Friday's announcement that they'd be inclined to walk away rather than try to figure out another use for the property.

Councilwoman Lisa Adams said Tuesday that it was "the right choice" to bail on the deal.

"I'm happy for that neighborhood," said Adams, whose district includes 653 E. Simpson Ave. and who was politically isolated when she was the first to suggest moving forward with just three sites.

Chris Sveiven, who lives a few houses down from the Lit'l Scholars day care and helped organize the opposition, called it "the right decision" and said he was proud of a group of vocal neighbors whom he now counts as friends.

The city's decision was "set in concrete," Sveiven said, "and I feel like our voices were heard."

Community activist George Chapman agreed that the resident testimonies, yard signs and other efforts played a role in the outcome.

"This shows what neighborhoods, when they come together, what they can accomplish," Chapman said. "I'm pumped."

Traci Murphy doesn't live in Sugar House, but the West Valley City working mom was as happy as anyone about the decision to abandon the site for a homeless shelter.

"That means I don't have to look for a new place to relocate" 8-year-old daughter Isabelle, who has been going to Lit'l Scholars since she was 2. She called it the "best news ever."

Shelter opponents had raised nearly $5,000 toward the city's $10,000 nonrefundable deposit through a crowdfunding site.

Rojas said the city's decision means it will no longer pay $300,000 to take on Forest Co.'s role in a lawsuit against the Utah Transit Authority that relates to the property.

The city will also discontinue its environmental study of the site, which once included uranium tailings from a nearby mill.

Rojas said a Freedom of Information Act request with the Department of Energy is still pending and results will be passed along to Forest Co.

END_OF_DOCUMENT_TOKEN_TO_BE_REPLACED

Robert Gehrke: In the age of a broken Congress, hypocrisy is the name of the game
By Robert Gehrke • 8h ago 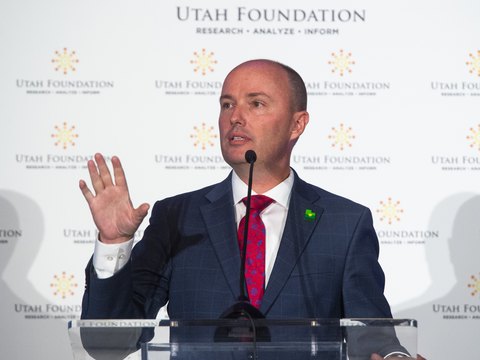 Spencer Cox says he has ‘no choice but to agree’ with Gov. Gary Herbert on mask mandates
By Bethany Rodgers • 23h ago
END_OF_DOCUMENT_TOKEN_TO_BE_REPLACED
L