Gwyneth Paltrow denies causing Deer Valley ski crash, says she was the one hit by a Utah man

Lawyers for movie star Gwyneth Paltrow have filed a counterclaim against the Utah man who says she crashed into him on the slopes of Deer Valley — arguing that he slammed into her.

The counterclaim, filed Wednesday in 3rd Judicial District Court in Summit County, says Paltrow “sustained a full ‘body blow’” on Feb. 26, 2016, when she was hit by skier Terry Sanderson.

Sanderson, 72, a retired optometrist, filed suit against Paltrow on Jan. 29, saying the Oscar-winning actor hit him while skiing, running over him and leaving the scene while he lay in the snow with four broken ribs and a concussion.

Sanderson told reporters Wednesday he was disappointed when he heard about Paltrow’s counterclaim. “I thought, ‘Oh, what a shame to see them taking that position,’” he said. “She’s had a lot more roles being believable. This is hard for me, but I have the truth on my side.”

In the counterclaim, Paltrow’s lawyers argue that Sanderson hit Paltrow from behind on Bandana, one of Deer Valley’s beginner ski runs. They also say Sanderson stood up after the collision, and apologized for running into her. When a Deer Valley mountain host and ski patroller checked on them, Sanderson said he was fine, according to the counterclaim.

Paltrow’s lawyers cite an incident report filed by Eric Christiansen, the ski instructor who was accompanying Paltrow down the slopes. Christiansen is also a co-defendant in Sanderson’s lawsuit, along with Deer Valley itself.

That’s where the counterclaim falls down, Robert B. Sykes, Sanderson’s attorney, said Wednesday. Reading from the incident report, Sykes pointed out that Christiansen wrote, “I didn’t see it, but heard her scream as she went down.”

After the collision, Christiansen wrote, he saw Paltrow further downhill than Sanderson — which he concluded meant Sanderson hit her from behind.

Sykes disagreed. “Where you end up is not necessarily where you started out,” Sykes said.

Sykes then played a video interview with a witness, Craig Ramon, who was skiing in a group with Sanderson at the time. Ramon said he saw the incident from about 25 to 35 feet away, and that Paltrow hit Sanderson in the back, landed on top of him and then slid off in front of Sanderson.

In his report, Christiansen wrote that Sanderson said “that she appeared right in front of him, thus admitting he was the uphill skier. She never saw him because he came in from behind.”

Sykes pointed out another contradiction in Christiansen’s incident report. To the question “Was Ski Patrol called or First Aid visited?” Christiansen checked the “no” box, then wrote “but a patroller came by to check on everyone.”

There is no indication in the documents that Paltrow’s side is offering any support for its case besides the incident report, Sykes said. “If they have witnesses, they haven’t disclosed them,” he said.

In the counterclaim, Paltrow’s lawyers argued that Sanderson filed the lawsuit “in an attempt to exploit her celebrity and wealth.” Paltrow, 46, won an Academy Award for her role in “Shakespeare in Love” in 1999, and appears as Pepper Potts, the ever-patient girlfriend of billionaire superhero Tony Stark, aka Iron Man, in the Marvel Cinematic Universe film franchise. She also is the face of the website and lifestyle brand goop.

In the counterclaim, Paltrow is seeking “symbolic damages” of $1, plus her costs and attorneys’ fees. The document said Paltrow will give any money recovered to charity.

Sanderson’s suit initially sought $3.1 million in damages. Sykes said the suit has been amended, and his client is now seeking unspecified damages, to be determined at trial if a settlement is not reached.

END_OF_DOCUMENT_TOKEN_TO_BE_REPLACED

Washington man is 1st in U.S. to catch new virus from China
By Carla K. Johnson and Mike Stobbe | The Associated Press • 16h ago
END_OF_DOCUMENT_TOKEN_TO_BE_REPLACED
L 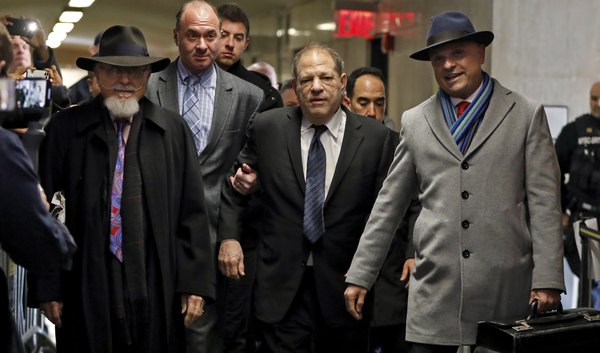