Fort Collins, Colo. • When a young mountain lion clamped its jaws onto Travis Kauffman’s wrist and clawed at his face, he screamed a “barbarian yell,” jammed his foot onto the animal’s neck and held it there until the cat quit thrashing and died.

After a couple of minutes, Kauffmann recalled Thursday, "it finally stopped moving and then the jaws opened and I was able to kind of scramble back up the hill and get the heck out of Dodge."

Through it all, the 31-year-old trail runner said, the cat remained eerily silent.

It was the first time Kauffman publicly recounted the Feb. 4 ordeal that left him with 28 stitches and a reputation for toughness and bravery that overshadows his wiry frame.

“I will never be able to live up to the reputation,” said Kauffman, who stands 5-foot-10 and weighs about 155 pounds . “The story is bigger than my puny form.”

Kauffman said he was running a trail in the mountains west of Fort Collins, Colo., when he heard pine needles rustle behind him. He turned to see the mountain lion about 10 feet away.

"One of my worst fears was confirmed," he said.

That cat lunged, and Kauffman raised his hands and screamed.

The animal locked its teeth onto his wrist and they tumbled off the side of the trail.

A wave of fear rolled over him, he said, and he worried that the animal's full-grown mother would join the attack to defend her offspring. But no other cat appeared.

Fear then gave way to the fighting instinct, he said.

Kauffman grabbed a rock with his free hand and beat the cat on the back of the head. He also tried stabbing it with twigs, but nothing worked.

“I knew with two pretty good blows to the back of the head [and] it didn’t release, that I was probably going to have to do something a little more drastic,” he said. “I was able to kind of shift my weight and get a foot on its neck” until it succumbed.

Bleeding from his face and wrist, he jogged back down the trail, where he met other runners who got him to a hospital.

"I was just thankful that he had his eyes and his fingers and all his parts, and it didn't look as bad as I maybe would have thought that it could," said his girlfriend, Annie Bierbower.

Colorado Parks and Wildlife officers retrieved the dead cat. They said their investigation and a necropsy confirmed Kauffman's account.

"Travis is a pretty amazing young man," said Ty Petersburg, a wildlife manager for the agency.

Kauffman was the 22nd person attacked by a mountain lion in Colorado since 1990, Parks and Wildlife said. Three of the attacks were fatal.

A necropsy report said the lion that attacked Kauffman was male, four or five months old, weighing 35 to 40 pounds. The cat had limited fat, indicating it was hungry but not starving. It showed no sign of rabies or other diseases, the report said, but many of its organs had been scavenged by other animals before the body was recovered.

Petersburg said officers set up cameras and traps in the area for several days after the attack. They saw no large mountain lions but captured two young ones in good health. He said both are in a rehabilitation center, and the agency hopes to release them back into the wild.

Kauffman, an environmental consultant, described himself as an avid runner, cyclist and skier who has a pet cat at home. He said he doesn't plan to retreat from the outdoors.

"I will go run those trails again," he said, but added, "I will go with a buddy there."

This story has been corrected to show Kauffman weighs about 155 pounds, not 150.

END_OF_DOCUMENT_TOKEN_TO_BE_REPLACED Poll: Only half of Americans would get a COVID-19 vaccine
By Lauran Neergaard and Hannah Fingerhut | The Associated Press • 1d ago 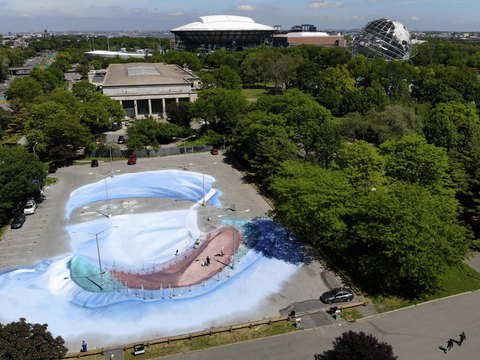