In the face of a pandemic, climate activists reevaluate their tactics

Until the coronavirus crisis exploded in the United States, Cherise Udell was helping to organize a national climate-action training aimed at mobilizing as many as 11 million people to fight for serious climate solutions.

As founder of the group, Utah Moms for Clean Air, she's learned firsthand how building trust face-to-face is crucial for taking on big issues associated with a healthy environment.

But three weeks ago, in the face of the COVID-19 pandemic, she persuaded fellow organizers in the upcoming Arm in Arm 4 Climate campaign to rethink an upcoming activist training retreat. Instead of gathering in Washington, D.C., they are going to plan their direct actions virtually.

“No one wants to hear about climate change now — not even climate change activists,” she said. “It’s like shouting in a gale storm: Nobody’s listening to you.”

The coronavirus pandemic has created a quandary for the climate activists just as the movement has achieved unprecedented momentum. It’s a pivotal moment for the cause because polls show that a majority of Americans see climate change as a problem. Just last month, a poll found that seven of every 10 voters said government should be doing more to address climate change. And leading up to the November elections, the issue is in play in everything from races for state legislatures and congressional seats to the campaign for the presidency.

For many activists, the world response to COVID-19 could prove to be an object lesson for climate change. How the pandemic is managed — or mismanaged — illustrates points that they have been trying to make for the climate with mixed success.

On Thursday, Laurence Tubiana, a former French diplomat involved with the 2015 Paris climate accord, described coronavirus as a wake-up call for governments to deal with climate change swiftly, according to Reuters. He said viruses, like climate change, do not respect borders. “If we do not manage the climate crisis it will be the same,” he said.

But with climate change now far from people's minds, activists are nervous about their campaigns losing ground. They don't want to seem pushy or insensitive at a time when COVID-19 cases are rising and people are coping with a surreal world of closed restaurants and stores and being stuck at home. Many climate-action campaigns have canceled events, shifted them to the digital universe and started looking for ways the crisis of today can help them bring attention to the slow-moving climate crisis down the road.

As the escalating pandemic continued to dominate daily life this week, organizers of Earth Day’s 50th birthday bash scratched their traditional live concert and rally on the National Mall for the April 22 anniversary, rescheduling it for October. They announced a “Digital Earth Day” for the 1 billion people worldwide who normally participate in events marking the day.

Some chapters of the youth-based Sunrise Movement have abandoned plans for a strike, while beginning to organize online teach-ins to engage students who are stuck at home and eager for something to do, now that so many schools have been shut down by the coronavirus. And from local climate groups to global coalitions, activists are moving their canvassing, signature gathering and get-out-the vote campaigns to the Internet.

Moves like these represent a strategic shift for a social-political movement built on human connection that starts in neighborhoods and reaches around the world. And as long as protests, demonstrations and strikes are banned, and the deaths and disruption of COVID-19 vastly overshadow the threat of greenhouse gas emissions in the public mind, the climate movement will be anxious about maintaining that connection.

Taylor Fang: To tackle climate change, we must build trust

"We're hopeful that folks are still very much willing to want to be engaged, that they're seeking connection, then we're going to meet them where they are, and invite them to be active with us," said David Willett, senior vice president for communications at the League of Conservation Voters.

The League's state and national affiliate organizations raised and spent $80 million on pro-environment candidates and get-out-the-vote campaigns in the 2018 elections. Planning on spending even more this year, the League also is responding to social distancing guidelines by shifting to virtual operations. Staff work at home. Meetings and outreach take place online. And, on Monday night, the League hosted a virtual fundraiser in lieu of a salon-style gathering originally planned to take place in New York.

There’s a lot at stake, Willett said. Asked about the prospect of keeping election fundraising on target this year, he responded: “It’s certainly too soon to tell.”

Connecting in a time of social distancing

Climate activists are still sorting out how they can adapt tried-and-true engagement tactics to the new realities of a world focused on surviving a pandemic.

Protect Our Winters, a politically sophisticated climate action campaign started by outdoor enthusiasts, is pivoting its approach to the 2020 elections. The Colorado-based group isn’t scrapping the 150 events on its calendars altogether, but it is nixing its popular in-person gatherings for people who love playing outdoors. The challenge, the organizers say, is holding onto that joyful energy driving climate action.

"We don't want to lose that," said communications manager Sam Killgore, adding that her organization is checking the tone of its outreach to be sensitive to the crisis at hand.

"We have to be innovative," she said.

Leaders drew up plans last year to bring climate voters to the ballot box for the 2020 presidential and congressional elections. Its research team zeroed in on 12 areas in six states where they thought smart campaigns could motivate outdoorsy people to vote in places where the past three elections have been especially close.

POW is now reconsidering how to handle its #crushitforclimate campaign, Killgore said. The plan originally was to urge outdoor enthusiasts to make a donation before heading outside to rack up new personal bests in, say, skiing, trail-running or mountain biking.

“Maybe you’re not going to go climb that huge peak [because of quarantines], but how can we still crush it for climate in a way that makes sense for the world that we live in right now?” she said, alluding to COVID-19-inspired quarantines and economic turmoil. “Maybe [the new approach] is, how many squats can you do in your living room? That’s recognizing where people are.”

Killgore said another POW event was going to feature snowboarder and military veteran Josh Jespersen leading a brewery tour. But moving the tour online might mean Jespersen adapting a virtual platform for the give-and-take with the crowd that is typical of POW engagement events. But instead of sending participants to the bar, he might ask them to grab a beer from their own refrigerators.

"It's not going to just be us filming a webinar and putting it out on social media," said Killgore. "It's trying to find a way to bring people into the fold in a way that they still feel like they're making that connection."

Citizens Climate Lobby is urging its volunteers across the nation to decide on their own whether to participate in one of its big events of the year: the annual U.S. Capitol fly-in. Bill Barron, CCL's Mountain West Regional Coordinator, was among the 25 people on the first fly-in a decade ago and one of 1,300 people who participated last year.

Barron said having constituents meet with members of Congress is crucial for building support for carbon-fee-and-dividend legislation, which the group bills as an alternative approach to carbon taxes. But the pandemic is forcing CCL to balance volunteer safety while also maintaining the persuasive power of direct constituent lobbying.

Some climate activists are also looking beyond this spring and summer. In states like Florida and Arizona, COVID-19 made health and safety concerns top of mind during presidential primary voting on Tuesday. But activists said that preoccupation may be fading by the time state and congressional primaries roll around in August in both states.

Sandy Bahr leads the Phoenix-based Grand Canyon Chapter of the Sierra Club, which is continuing to track environmental issues, such as renewable energy standards and coal-plant retirements, but has put canvassing and other in-person engagement on hold.

"We're still figuring it out," she said. "The bottom line is we have to be more creative and think about ways to connect with people without being close to them."

The buildup to this critical moment for the climate action movement has been underway for years — some would say, decades. Warnings about the urgency of climate action have become more dire, with activists emphasizing that time’s running out for meaningful action. And climate change has become an inescapable reality for millions of Americans in the form of deadly wildfire, floods and hurricanes.

Willett, the League of Conservation Voters spokesman, said the coronavirus pandemic underscores weaknesses in the Trump administration, especially when it comes to proactive leadership and energy-industry favoritism.

"This pandemic shows what happens when science and experts are ignored and the institutions we rely on to protect us are weakened," he said. "And that is also the story of climate change."

Alessandro Dal Bon, a New York City teenager, high school student and Fridays for the Future organizer, was part of the global climate strikes last year that drew millions of protesters worldwide, based on the idea that climate change represents an existential threat for future generations. He said it was a tough but necessary decision earlier this month for youth climate movement organizers to move their three-day Earth Day program online.

"It's inevitable that the coronavirus will have an impact on climate activism like it's having on every other aspect of life," he said.

But Dal Bon quickly added that fighting COVID-19 offers a preview of what could happen to life in the future "if we don't act on it."

For some, time for a pause

Udell, for her part, has put climate organizing on the back burner for the time being.

Instead, she's focused on a new Facebook group she and a friend set up as a coronavirus information hub. In less than two weeks, membership has topped 1,500. The page even has become a clearinghouse for people needing help because of the coronavirus and those willing to lend a hand.

"This is a more pressing issue," Udell said. "I'm going to help my neighbors regardless of what their political affiliation is. I'm going to see them as a human being in distress and in need of my help, and I hope they do the same for me."

It’s a way to build trust, she added, even for something they’re not talking about now, like climate action. She said: “I think it opens the door.”

InsideClimate News is a Pulitzer Prize-winning nonprofit, nonpartisan news organization that provides essential reporting and analysis on climate, energy and the environment. Learn more at insideclimatenews.org.

END_OF_DOCUMENT_TOKEN_TO_BE_REPLACED 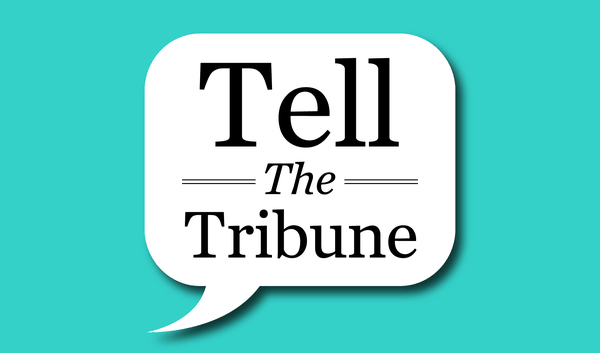 Tell The Tribune: How has the coronavirus affected mental health in Utah?
By The Salt Lake Tribune • 7h ago

Transit ridership is way down, but that’s OK with UTA
By Lee Davidson • 7h ago 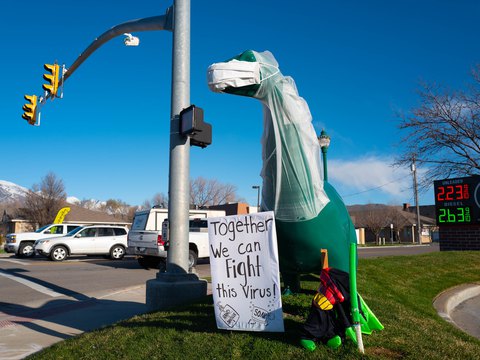 ‘Next year, we will be free’ — Salt Lake City couple celebrate an intimate, yet expansive, Passover Seder
By Peggy Fletcher Stack • 42m ago