Yes to medical marijuana in Utah, no to smoking it: Here’s what Utahns may vote on in 2018

Group aims to collect 113,000 signatures to put the question before Utah voters in November 2018.

After years of failed legislative attempts to legalize medical marijuana in Utah, supporters now are attempting to take the issue straight to voters.

The Utah Patients Coalition held a Monday news conference at the state Capitol and afterward delivered its proposed initiative to the lieutenant governor's office with patients, caregivers and supporters in tow. If the wording of the initiative is approved, backers must hold seven public hearings throughout Utah and collect 113,143 signatures from registered voters around the state to get the question on the November 2018 ballot.

The proposed law uses much of the same language as former State Sen. Mark Madsen's SB73, which nearly passed in 2016. If the initiative wins voter approval,smoking marijuana would still be prohibited. So, too, would driving while intoxicated with medical cannabis. And there would be limitations on the number of cannabis facilities allowed and physicians permitted to prescribe medical marijuana.

Topicals, oils, edibles and vaping would be allowed, but no use of medical marijuana could occur in public view. Some of the qualifying illnesses included in the proposed law include Alzheimer's disease, cancer, multiple sclerosis, post-traumatic stress disorder, chronic pain and autism. Madsen, who is preparing to move abroad, attended the conference and said he has high hopes for the initiative.

"It's great to know you are not needed," he said. "Obviously, this effort is going to be sustained, there are quality people involved that know this issue and have taken the time, unlike my former colleagues in the Legislature, to really understand this issue."

If voted into law, dispensing in Utah would begin January 2021 and patients would receive their medical marijuana cards January 2020, said Connor Boyack, president of Libertas Institute who personally consulted with the political issues committee (PIC). If the initiative passes but the state fails to implement the system it envisions, the law also stipulates that patients could grow their own marijuana outside of residential areas.

In 2014, the Utah Legislature approved a narrow bill allowing patients with severe epilepsy to acquire cannabis oil and this year passed a bill calling for more research on medical marijuana. But its continued rejection of wider access has provided a dose of reality, said advocate Christine Stenquist.

"We have all seen through this last legislative session that it'll be the same dog and pony show in trying to appease us with something superficial," said Stenquist, president and co-founder of TRUCE, or Together for Responsible Use and Cannabis Education. "This is our opportunity to finally do something."

Supporters face months of work to get on the November 2018 ballot.

There is no specified amount of time the lieutenant governor's office can take to review an initiative once it is submitted, said Mark Thomas, state director of elections. Review times can vary depending on the length of the wording of the proposed law, the topic and whether staffers need to request assistance from other offices.

If accepted, the initiative application will be sent to the governor's Office of Management and Budget to create a fiscal estimate of the impact of the law.

After the estimate is complete, organizers must hold seven public hearings throughout Utah before collecting petition signatures.

The number of required signatures represents 10 percent of Utah votes cast in the 2016 presidential election statewide and in at least 26 of Utah's 29 Senate districts.

Signatures for each Senate district must be submitted to the county clerk's office by April 15, which will verify that signatures came from registered voters. DJ Schanz, executive director of the coalition, said it hopes to have signatures collected and filed by Jan. 1 before the Legislature starts.

"We don't want [the Legislature] playing games," he said. "We want to have [the signatures] done so that they won't play games thinking that we aren't going to be able to collect them."

Schanz said organizers need to raise about $3 million to fund the effort. The coalition raised about a third of that, he said, before submitting the initiative Monday.

Tremonton residents Debbie and Monte Hoskins, members of that group, expect to use their personal story to help Utahns understand the necessity of medical marijuana.

While living in Colorado, Monte Hoskins tried medical marijuana for a 20-year-old back injury. It helped him cut his opioid intake in half, he said, but he had to quit using it upon moving back to Utah.

"My goal is to plant a seed in their minds about what medical marijuana really does for people, so when they do their own research they will better understand it," Debbie Hoskins said. "And when it comes time to vote for it, even if they don't personally have a need for it, they will allow it to be available for those who do."

Once on the ballot, the initiative needs a majority of votes to pass.

Advocates hoped for legalization in 2016 with two bills that would have set the groundwork for medical marijuana regulation and cultivation. But lawmakers killed the bills in the final hours of the session.

Rep. Brad Daw, R-Orem, is surprised the ballot initiative is moving forward, given that there is research happening through a bill he sponsored last session calling for more in-state research of medical marijuana. He said current research efforts, including a study at the University of Utah of chronic pain, and work with the Cannabinoid Product Board could lead to legislation legalizing some medical marijuana products as early as next year.

Daw is concerned the ballot initiative could "spook a lot of people he has tried to get on board" and is worried future legislation could get caught up in initiative efforts.

"It muddies the water," Daw said. "At all points in time, I have kept my door open to negotiate and find a path forward that is reasonable for everyone."

On Monday, church spokesman Eric Hawkins pointed to Daw's measure as striking a balance between boosting research and understanding any challenges that could come from legalization.

"Society is best served," he said in a statement, "by requiring marijuana to go through further research and the [Food and Drug Administration] approval process that all other drugs must go through before they are prescribed to patients."

Studies can take years to conduct, and there are several hoops researchers need to jump through to even start studying medical marijuana, including multiple federal applications with monthslong waiting periods for approval.

The Utah Medical Association, while supportive of more research into the medical uses of marijuana, is concerned about making a medicine available for prescription and use through legislation or by vote. Paul Clayton, president of the association, said opening up marijuana to the public to treat all kinds of medical conditions may be fraught with hazards.

"We hear a lot about patients that have significant medical conditions that are searching for answers and we sympathize with them," Clayton said. "We don't feel like we have the answers about cannabis right now to use that to treat medical conditions."

As of April, 29 states, the District of Columbia, Guam and Puerto Rico have legalized medical marijuana, according to the National Conference of State Legislatures, including three of Utah's border states — Arizona, Colorado and Nevada.

END_OF_DOCUMENT_TOKEN_TO_BE_REPLACED 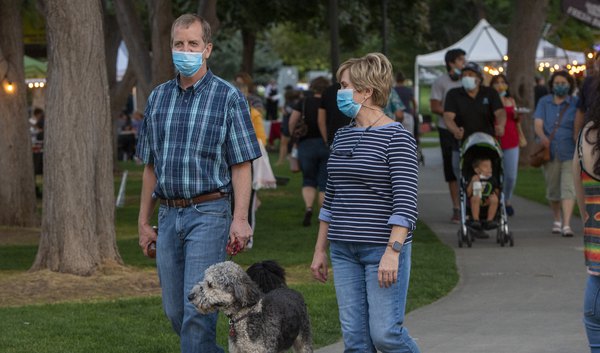 Utah reports another record high number of new coronavirus cases, with 1,411 on Friday
By Erin Alberty • 3d ago