The district announced Thursday that teachers will receive 9 percent raises, with the salary for first-year educators increased from $39,954 to $43,887.

Those salary figures are part of a tentative agreement with the Salt Lake Education Association, and are subject to ratification by union members and a final vote by the district school board.

In a prepared statement, Salt Lake City Schools Superintendent Alexa Cunningham said the district has long been committed to attracting and retaining teachers by offering one of the highest salary plans in the state. "To compete in today's marketplace," Cunningham said, "we felt it was important to continue that tradition."

Jordan School District was the first to make its salary plans known, triggering what many educators have privately described as an "arms race" in Salt Lake County.

The roughly $44,000 starting salary offered by Salt Lake City School District would be the highest in the state, based on currently approved or proposed district salary plans. But Park City School District — traditionally Utah's highest-paying district — has not yet released numbers for next year's salary schedule.

Molly Miller, spokeswoman for Park City School District, said something "significant" is expected when the school board meets later this month.

"They're actively working on it right now," Miller said.

"A lot of us feel like this is the best [salary] package we've had in a really, really long time," she said.

McFarland said salary levels, including starting pay, are a critical factor for attracting and retaining those considering an education career.

"We have families like everyone else and we need the pay to be commensurate to that of other professions," McFarland said. "I know a lot of [districts] have been trying to come up to where we are. But we also stepped it up this year."

The tentative agreement for Salt Lake City School District also includes an additional three days for a teacher's annual work calendar and a commitment by the district to cover increases in insurance costs.

District officials say they don't expect to have to boost taxes to pay for the increase in personnel costs.

"We are grateful for the great relationship we have with our teachers and their association," Cunningham said, "and we appreciate their willingness to work with the district on this tentative agreement."

END_OF_DOCUMENT_TOKEN_TO_BE_REPLACED 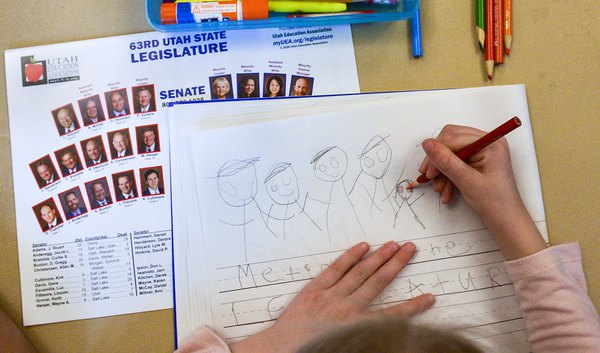 In primary election, 4 Republicans win seats on Utah school board because no Democrats ran
By Courtney Tanner • 6d ago