Hold on, Mr. President. Your proposed tariff on all imports of steel and aluminum could inhibit the continued growth of Utah’s thriving economy.

That’s the message President Donald Trump is getting from many Utahns, including:

• Building contractors and manufacturers who create products from the metals targeted for higher import fees.

Yet others, like Nucor, a steel manufacturer with a sizable presence in Box Elder County, support Trump’s stated intent to slap a 25 percent tariff on steel and 10 percent on aluminum imports.

The proposal has increased the stress loads on people like Jim Russell, director of the state Division of Facilities and Construction Management, who is charged with predicting the cost of building big projects — such as a new and already increasingly expensive prison.

“The threat of the tariff has increased prices already and we’re trying to get our arms around what that impact will be and how we can try to mitigate it — if we even can, and I’m not sure we can,” Russell said. “It’s kind of a waiting game at this time to see what we can do, because we’re not in a position to procure the steel at this point.”

Budget managers for the $3.1 billion reconstruction of Salt Lake City International Airport are in a similar quandary.

“The potential is there for cost impacts,” said airport spokeswoman Nancy Volmer. “There is a lot of confusion in the trade community, since no one knows exactly what [the president’s proposal] means and there is no policy to read. We have not begun steel erection on the north concourse yet, so we are strategizing with the contractor on that portion of the project to determine how best to mitigate the cost risk.”

Despite Trump’s insistence on going forward, Utah Sens. Orrin Hatch and Mike Lee and Rep. Mia Love have joined a growing chorus of Republican lawmakers calling on the president to back off.

“History has demonstrated repeatedly that consumers — American families and taxpayers — ultimately bear the burden of tariffs on these kinds of imports,” Hatch said in a statement Tuesday. “The proposed tariffs would miss those countries whose unfair trade practices have caused global overcapacities in steel and aluminum and would hit American businesses and families instead.”

In a separate statement, Love said a steel fabrication company in her district, SME Steel in West Jordan, could be forced to lay off some of its 1,800 employees if the administration implements the proposed tariff. “The company forecasts that contractors, architects and engineers will be compelled to search for cheaper alternative materials in an effort to ensure financial feasibility in building projects,” she said.

Other Utah companies and trade groups also were willing to weigh in on the proposed tariffs.

Nucor, based in North Carolina with plants in Box Elder County, applauded Trump’s approach as vital to protecting national security.

“The President has consistently been a strong advocate for holding other countries accountable that systematically and flagrantly violate international trade agreements and free market principles,” said a statement from company spokeswoman Katherine Miller. “We are pleased that the President has decided to use all the tools at his disposal to send a clear message to foreign competitors that dumping steel products into our market will no longer be tolerated.”

David Kirkham, whose company in Alpine makes replicas of famous cars, would prefer not to see higher fees imposed but was willing to accept Trump’s proposal.

“It will suck, but it is what it is,” groaned Kirkham, who said he used 40 million tons of aluminum last year, almost all from American producers Alcoa and Kaiser. He imported a small percentage from a metals plant he owns in Poland. “I’m not in a business where every penny matters on my costs. But the increases [from higher tariffs] will cut into my profitability. It will be a headache, but it’s not insurmountable.”

In Clearfield at Futura Industries, which employs hundreds making custom-shaped aluminum products for all kinds of uses, company president Jared Bringhurst said “a 10 percent tariff on any primary imports will be devastating to our business and our customers. … Canadian and Mexican [competitors] would have a huge advantage selling extruded aluminum products to our domestic customers.”

“Our hope, of course, is that somehow Trump reverses course,” he added. “The best outcome would be to identify the specified countries of concern (i.e. China) and apply the tariffs to [its] aluminum products.”

His thoughts mirrored those of World Trade Center Utah President and CEO Derek Miller: “If countries like China are engaged in unfair trade, the resolution should be targeted and focused. By imposing broad tariffs across the board, we strain our relationship with trade allies and jeopardize the competitiveness of local companies.”

Construction companies will be especially hard hit, said Ken Simonson, chief economist for the Associated General Contractors, whose Utah chapter is thriving with apartments and new office buildings popping up all along the Wasatch Front.

“The price of both imported and domestic metals is likely to rise immediately,” he said, noting that steel is used in almost all construction — wire mesh in highway concrete, cables for bridges, rebar and studs to reinforce walls — while aluminum goes into window frames, siding and other architectural features. “Bid prices will rise for future projects.”

In Utah, the tariffs could have a negative ripple effect through the state’s economy, said Salt Lake Chamber President Lane Beattie.

“It is our hope,” he said, “that President Trump takes a step back from his calls for heavy-handed tariffs and restrictions on steel and aluminum imports and thinks about the impacts such actions could have on this country’s overall competitiveness.”

END_OF_DOCUMENT_TOKEN_TO_BE_REPLACED

Robert Gehrke: How one Utahn used this pandemic to create works of art
By Robert Gehrke • 4h ago

END_OF_DOCUMENT_TOKEN_TO_BE_REPLACED 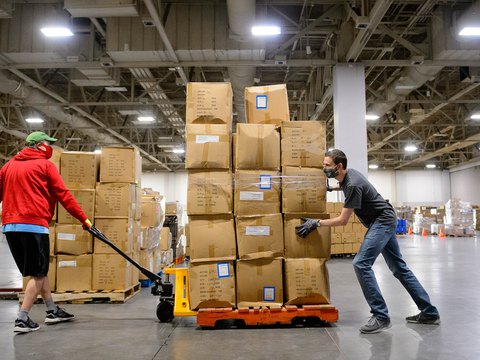 Steelers and Titans will play Monday or Tuesday due to COVID-19 outbreak
By Teresa M. Walker | AP Pro Football Writer • 1h ago
END_OF_DOCUMENT_TOKEN_TO_BE_REPLACED