Cynthia Lemus can’t use her voice at full strength, as she’s still feeling the effects of COVID-19.

“I’m just tired, trying to get my energy back,” she said Friday. What’s important is where she said it: At home.

Lemus, a 24-year-old flight attendant from Magna, was released from Murray’s Intermountain Medical Center on Thursday — after spending 25 days being treated for COVID-19, 18 of them in a medically induced coma while ventilator tubes pushed oxygen down her throat into her ailing lungs.

Lemus’ release from the hospital, through a hallway of cheering medical workers, came 13 days after she became the first person in Utah to receive “convalescent plasma,” the plasma of a recovered COVID-19 patient transfused into her bloodstream.

The plasma treatment program, sponsored by the U.S. Food and Drug Administration and coordinated by the Mayo Clinic in Minnesota, has evolved since it began, Webb said. Since Lemus received her transfusion, 10 other hospitalized patients at Intermountain have received the treatment.

“It’s too early to comment on whether this particular treatment for COVID-19 is successful,” Webb said. However, all 11 patients “are in the process of recovery,” he said.

The treatment involves giving plasma, donated by recovered COVID-19 patients who have developed antibodies against the coronavirus, to those who still have the disease. “The theory is that those antibodies would then attach to virus particles and neutralize [them], or cause them to not be able to cause tissue damage,” Webb said.

‘This is a potential public health disaster:' COVID-19 results from TestUtah.com are raising questions

In a first for Utah, a COVID-19 sufferer receives plasma transfusion from a recovered patient

Being the first person in Utah to receive the plasma treatment “is still something I’m processing, still barely being awake for a few days,” Lemus said. “It’s still something very surreal to me.”

Lemus’ husband, Moises, insisted on taking her to the emergency room on April 5. “I was feeling the shortness of breath for about two days, before he finally pushed me to go to the E.R.,” she said. “I definitely feel I waited just a little bit too long.”

The next day, April 6, Cynthia was put on a ventilator. Moises wasn’t allowed to be with her at the hospital, because he also had contracted COVID-19, though his symptoms were much milder.

On April 12, Cynthia was hooked up to an extracorporeal membrane oxygenation machine — called an ECMO machine or, colloquially, a heart-lung machine.

The ECMO is commonly used during heart surgery to replace the functions of the heart and lungs, said Dr. David Morris, associate medical director for general surgery in Intermountain’s Trauma Services Clinical Program. In recent years, Morris said, the ECMO has been useful in treating patients with severe respiratory failure.

“It is very taxing on the body to be on this kind of support,” Morris said. “It’s a tribute to Cynthia that she looks as amazing as she does today. Honestly, patients don’t typically rebound so quickly after being on this intensive level of support.”

“It was a complete nightmare,” Moises Lemus said of his wife’s ordeal, “getting the updates, seeing how she wasn’t improving, how she was getting worse.”

“As my body shows, I’m a fighter,” Cynthia Lemus said.

“It was definitely a little bit scary being there alone, since family isn’t allowed to be at the hospital,” Cynthia Lemus said. “But I know all the doctors and nurses that were there definitely made me feel like family.”

Moises Lemus, 34, who runs his own video-production company, received regular updates from medical staff, but didn’t see Cynthia in person again until her release on Thursday.

When he saw her being wheeled out of the hospital, he said, “my heart dropped. It was like she was walking down the aisle again.”

Doctors said it probably will be another month of home recovery before Cynthia Lemus is back to full health.

Both Cynthia and Moises Lemus said that, as soon as they can, they intend to donate their plasma, through the American Red Cross, which has been enlisted to find donors of convalescent plasma. (Those interested can go to RedCrossBlood.org to start the registration process.)

For Moises, a donation could happen as soon as 28 days after he recovers from COVID-19, said Dr. Walter Kelley, medical director of the American Red Cross’ Utah chapter. Cynthia will have to wait longer; Red Cross rules for blood donations ban anyone who has received a transfusion from donating for 12 months, Kelley said.

The Lemuses hope their story will encourage other young people to take COVID-19 seriously.

“People just don’t know how it’s going to act on your body,” Moises Lemus said. “You see Cynthia. She’s 24 years old. She’s young. She’s healthy. There is absolutely nothing wrong with her. And for the virus to take her that far down the rabbit hole, that’s something that we didn’t expect.”

Cynthia Lemus said she knows what she wants do to when she’s 100% healthy.

“Take a vacation,” she said with a laugh. “Go somewhere. Explore. Be able to know that I’m me again.”

END_OF_DOCUMENT_TOKEN_TO_BE_REPLACED 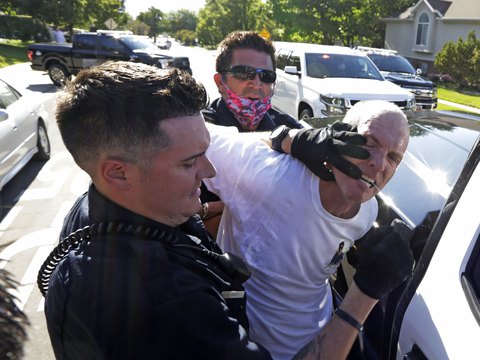