A 21-year-old who says he celebrated New Year’s Eve in Salt Lake City and then slept for hours before starting to drive home to Wyoming may have been the first person arrested under Utah’s new, stricter DUI threshold.

Utah Highway Patrol spokesman Sgt. Nick Street said under the old law, the man would likely have escaped prosecution. The new threshold, he said, gives law enforcement more “teeth” to prosecute individuals who, for whatever reason, metabolize alcohol between the time of an arrest and when a test admissible in court is conducted.

While prosecutions did happen before under similar circumstances, it was a “rare thing to see,” he said.

The new law, Street said, also may have contributed to a 37 percent decrease in the number of arrests troopers made for alleged driving under the influence (DUI) during the New Year’s weekend.

Last year, troopers arrested 46 people on suspicion of DUI. This year, 29 people were arrested on suspicion of DUI between just after midnight on Sunday morning and Tuesday, New Year’s Day. The 21-year-old was the first person UHP arrested who could be prosecuted under the new standard.

“I think that [decrease] is telling that, I hope, maybe there’s been some social changes," Street said, "...whether it’s paranoia not to get behind the wheel after consuming any amount of alcohol, or it’s ... the messaging that was put out in advance of 0.05.”

The Wyoming man said he did not know about the change in Utah’s law. “If I would have known it was a 0.05, I probably wouldn’t have hopped behind the wheel," he said.

A Utah Highway Patrol trooper pulled him over on New Year’s Day after his then-girlfriend called police to allege he had hit her during a fight that morning. A probable cause statement doesn’t say the trooper noted any signs of impairment before pulling the man over in connection with that call.

But the trooper reported he failed a field sobriety test, then recorded the preliminary BAC of 0.089 at the scene, according to a probable cause statement.

The man said he was terrified and “dog tired” during the field sobriety test, and believes that was why he failed. The Salt Lake Tribune, which generally does not report on individual DUI cases where no injuries occur, decided not to name the man.

After the man and the trooper arrived at the Summit County jail about two hours later, he recorded the 0.059 level on a machine that produces BAC results that are admissible in court.

Street said the lapse between the tests occurred because only one trooper was working in the area Tuesday morning, dealing with both the DUI arrest and the possible domestic assault. Street said the trooper had to wait for a tow truck to take the man’s car, and initially tried to take him to a closer office with a machine that runs court-admissible tests. But that office turned out to be closed, he said.

The man told the trooper at the scene that he’d drunk five shots of vodka, a “few” beers and other drinks the night before and into the early morning, according to the probable cause statement. He later told The Salt Lake Tribune he had partied at the Decadence rave at the Great Saltair, got a ride from Uber back to a friend’s house and was in bed by 1:30 a.m.

The man said he was forced to leave his friend’s house earlier than he wanted to, and without eating, because his girlfriend at the time had taken his keys from his pocket and tried to leave in his car. The two ended up fighting, and he dropped her off at a gas station near Echo, he said. That’s when she called police.

The man said he didn’t feel impaired and he didn’t think his BAC would be high enough to be charged with DUI. But he said he had a feeling he’d “blow numbers" because he could taste alcohol on his breath.

The man said he knew his decision to drive that morning wasn’t a “great” choice, but he thought he would be legal and felt that he had to leave because of his then-girlfriend’s behavior in taking his keys.

Instead of going to work Wednesday, like he was scheduled to do, he spent the night in Park City jail. He paid over $700 to get his car back from impound, and he’ll face the class B misdemeanor DUI charge filed against him. The man, who Street said could also face an assault charge for the alleged dispute with his girlfriend, said he plans to hire an attorney.

Street theorized that the increasing prevalence of ride-hailing services, such as Lyft and Uber, also kept more people from driving after drinking this holiday.

Clarification: Jan. 2, 2019, 2:19 p.m. • This story has been updated to reflect new information from court documents.

END_OF_DOCUMENT_TOKEN_TO_BE_REPLACED
Woman struck and killed by several vehicles on I-215
By Scott D. Pierce • 7h ago

Think you know Utah? Take our news quiz and find out.
By Kelly Cannon • 10h ago

END_OF_DOCUMENT_TOKEN_TO_BE_REPLACED 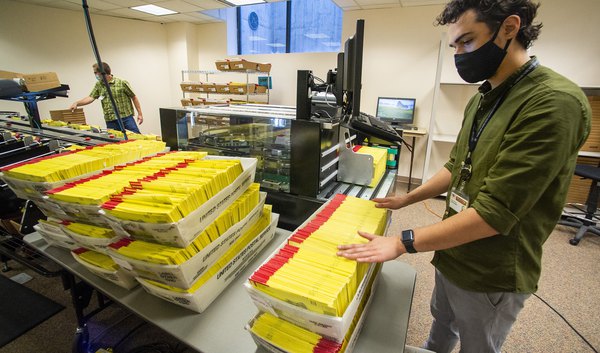