‘No one can really get the help they need’: BYU students are questioning wait times at their campus counseling center after a public suicide

Editor’s note: This story includes students discussing suicidal thoughts; each also described a process of recovery. If you or people you know are at risk of self-harm, the National Suicide Prevention Lifeline provides 24-hour support at 800-273-8255.

When Jacob Payne called the counseling center at Brigham Young University last year, he was told it would be eight weeks before the next available appointment.

It was his first semester, the middle of October, and he needed help. He’d been feeling “really down,” he said, and he didn’t know where else to go. So he waited. “During that time, things kept getting worse and worse,” he said.

Payne scarred his arms with self-harm. He thought about suicide. More than once, he said, he sat on the fourth floor bridge in the Tanner Building, with its open floor plan, and looked over the edge.

Two weeks before his appointment, Payne got in to see a psychiatrist elsewhere on campus who diagnosed him with depression. He dropped his classes, went home to Iowa and improved there with therapy and medication.

This week, those dark days came back to mind when a BYU student attempted suicide Monday from the same spot. The 19-year-old woman fell to the first floor of the massive atrium at the center of the Tanner Building, and was initially in critical condition. The school confirmed Wednesday afternoon that she later died in a hospital; a GoFundMe page is raising money for medical and funeral expenses.

“I did feel a lot of flashbacks from sitting there myself and a lot of pain,” Payne said. “I think that there’s definitely a problem here.”

Since the incident, several students have raised concerns about their attempts to seek counseling at the Provo school. They say the wait times are long, with some up to 10 weeks. When they do get in to see a therapist, they said, they can go a month or longer, between appointments. And if they wait too long into the semester, they’re turned away until the next term.

“They are understaffed, overbooked and no one can really get the help they need,” added Brigham Pitts, a freshman studying French. He recently waited three weeks to get an appointment and said his depression “definitely got worse” during that time.

“They just need more counselors,” suggested Jayne, a sophomore who receives counseling from the center and asked that, for privacy, her last name not be used.

One student shared a picture of an anonymous letter he said he found taped to the door of the counseling center after the incident Monday. It spread quickly on Twitter.

“I have a therapist on campus, and he is wonderful and well qualified,” it reads. “But I only see him once a month. Because he has too many clients to see in one week. ... For those of us that are in desperate need of care, we are lost in the masses of students who struggle.”

The university said Tuesday that it is reviewing what mental health resources it has available and will propose adding more counselors when its trustees meet again in January. Currently, it has one therapist per 1,000 students. It expects the demand for counseling to go up after Monday.

“We are responding to them to make sure that they get the help that they need,” said BYU spokeswoman Carri Jenkins.

The school opened the counseling office for crisis and walk-in consultations Monday at the Wilkinson Student Center. Therapists there spoke to 75 students that day and another 30 to 40 Tuesday, Jenkins said.

The university, which is owned by The Church of Jesus Christ of Latter-day Saints, is also considering whether it needs to address the architecture of the Tanner Building, which it closed about 90 minutes after the incident. For now, the school plans to divert students from the open walkways and overlooks, noted spokesman Todd Hollingshead. There was a death by suicide in the building about nine years ago, Jenkins said.

BYU President Kevin Worthen responded to the tragedy at a campus devotional Tuesday morning. “Such events try our hearts and stretch our souls,” he said. “They should also cause us to be more aware of, and more caring for, the well-being of every individual in our community.”

He and the event speaker, church apostle David A. Bednar, encouraged students to focus on ”good tidings of great joy” and seek counsel from God.

Zach Clement, a junior studying psychology, said he had tried to make an appointment with campus Counseling and Psychological Services last year, when he was recovering from stress from serving a mission for the faith. He booked an appointment two weeks out. The center called him to say it was overbooked and moved the appointment to four weeks out, he said.

Clement, who was struggling with depression at the time, waited and went to a group therapy session. He felt like it helped, he said, but he didn’t want to sit for another month after that before a follow-up session.

“I never tried to make an appointment with them again,” he said. “I knew it would take a long time and they weren’t reliable.”

He went to a private counselor, who he could see more frequently, and said his mental health has improved.

The challenges for BYU’s counseling center are not unique. More students across the state and nation are seeking help, but most colleges don’t have enough counselors to address the growing need.

BYU has 29 counselors and four interns to serve a campus of more than 33,000. According to the most accepted recommendations, that’s hitting the minimum of what a school should have. Others in Utah fare worse.

“Like any university, we have a wait time,” Jenkins said. “That’s a challenge that we face.”

BYU does have an on-call counselor available at any time for students experiencing an emergency, made available by calling police at 801-422-2222. But its counseling center is not accepting new clients until January, turning away those who ask for a regular appointment, the office confirmed Tuesday.

Students can also go the Comprehensive Clinic on campus, which the main student counseling center recommends when it’s booked, but the clinic is staffed by graduate students and specializes more in relationship and family therapy. Getting an individual appointment can require a two to three month wait.

“We wish we could see more,” said assistant director Dave Fawcett, “but we run pretty high to capacity.”

The clinic currently has between 500 and 600 clients.

Payne, who returned to the school this semester as a sophomore, said he’d like to see BYU set aside more funding for counseling. For many students — particularly those without insurance or away from home — the office on campus is the most convenient place to go. But it’s in a corner of the basement of the student center and not advertised much, he said.

Even if it were, though, he believes it wouldn’t have the capacity to provide the help that’s needed.

Sam, who asked that his last name not be used, called in February and booked an appointment a month and a half out. But he decided not to wait that long. He dropped his classes and moved back home to Oklahoma where he found a therapist who helped him.

“That easiest option just wasn’t there when I needed it,” he said.

Jayne said the incident Monday triggered her anxiety and depression. “It was probably one of the hardest days I’ve had this year.” She sees a counselor at the center once a month and would like to see one more often, particularly now.

A lot of students, she said, have been struggling since the incident at the Tanner Building. She comforted one girl who was having a breakdown in the restroom.

To help, student Sabrina Christensen and two of her friends created a memorial desk in the atrium of the building when it reopened in the morning. Students could grab a free rose or carnation with an attached note that said, “You are loved.” They also filled out colorful sticky notes, listing things they are grateful for, and stuck them around the room.

“We wanted to create an atmosphere of love,” the senior in marketing said. “It can be really hard to even walk back into the building.”

Christensen said she saw the incident take place Monday and said it’s been replaying in her head since. She was crying Tuesday morning, she said, but she found some comfort in reading the messages posted around a two-story Christmas tree that rises up from the building’s first floor.

END_OF_DOCUMENT_TOKEN_TO_BE_REPLACED 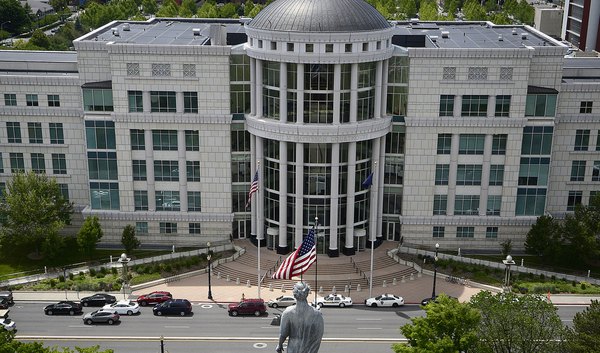 Think you know Utah? Take our news quiz and find out.
By Kelly Cannon • 7h ago
END_OF_DOCUMENT_TOKEN_TO_BE_REPLACED
L

END_OF_DOCUMENT_TOKEN_TO_BE_REPLACED

Nathan Evershed: Context was lacking as people jumped to conclusions on police shooting
By Nathan Evershed | Special to The Tribune • 19m ago