At least one Salt Lake City-area radio station has stopped airing an advertisement opposing Utah’s Proposition 2 after complaints that the spot included false and misleading statements about medical marijuana.

Kayvon Motiee, president of Broadway Media, said the ad by the Drug Safe Utah coalition is no longer airing on 101.5 The Eagle (KEGA), the only Broadway station that had been running the opposition message.

“We want to pull the ad until we can substantiate the truthfulness,” Motiee said. “All in all, we had 53 complaints over the weekend about it.”

Federal Communications Commission records show that Drug Safe Utah also purchased $3,000 of radio airtime on KSL, scheduled to run between Sept. 5 and Sept. 11. And the coalition purchased roughly $2,500 of airtime on Talk Radio 105.9 KNRS, which hosts the popular “Rod Arquette Show,” according to FCC records.

Tanya Vea, general manager of KSL, confirmed that the advertisement began airing on Wednesday. KSL is owned by The Church of Jesus Christ of Latter-day Saints, which has come out in opposition to the ballot measure.

“There’s been no challenge to the ad on our part,” Vea said.

On Tuesday, the Utah Patients Coalition — which sponsored the ballot initiative to legalize medical marijuana in Utah — filed a formal complaint with the state’s election office regarding the advertisement and other anti-medical marijuana campaign materials. The group alleged that Drug Safe Utah — a coalition that includes the Utah Medical Association and the LDS Church — has made false claims regarding Proposition 2, including that the initiative would facilitate recreational use of marijuana.

If approved by voters in November, Proposition 2 would allow patients with qualifying medical needs and a doctor’s recommendation to obtain a medical marijuana card and legally buy medical cannabis from a privately owned dispensary.

“These new efforts are part of a larger trend on [Drug Safe Utah’s] part to lie to the public,” the Utah Patients Coalition says in its complaint. “While we respect those who disagree with the legalization of medical cannabis in Utah, the Utah Patients Coalition considers the use of false statements to be repugnant, especially when their effect would be to continue criminalizing patients in Utah.”

Drug Safe Utah responded to the complaint with a statement that accused pro-recreational marijuana groups outside the state of trying to silence the realities of Proposition 2. Those groups, Drug Safe Utah said, do not want Utahns to know that some forms of medical marijuana are already legal in the state, that Proposition 2 includes optometrists, podiatrists and dentists in the list of medical professionals who could recommend marijuana as a treatment, and that the initiative lacks the traditional safeguards of medical practice.

“Drug Safe Utah stands by its public statements and ads and will respond to this effort to silence debate,” the coalition said. “Unlike prescribed medicines, there is no dosage [of medical marijuana], no physician follow-up required, no disclosure of risks. This creates an environment for recreational marijuana to flourish.”

State law prohibits individuals from knowingly publishing false statements regarding election issues, Lee said. But it has not been determined whether a violation took place, he said, or what consequences would follow a violation.

“We are reviewing it,” he said. “There’s not a specific penalty attached to this law.”

END_OF_DOCUMENT_TOKEN_TO_BE_REPLACED 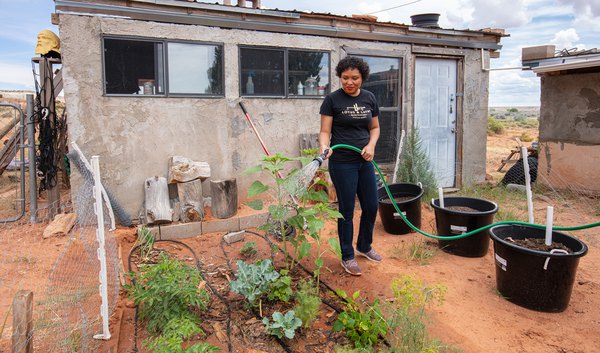 For the Navajo Nation, a fight for better food gains new urgency
By Amelia Nierenberg | The New York Times • 16m ago