Improvements have ranked the state among the nation’s most energy-conscious, report says — but business leaders worry about cuts to Rocky Mountain Power energy-savings programs.

Utah is rising in the ranks among the nation’s most energy-conscious states, according to a new report from the American Council for an Energy-Efficient Economy (ACEEE).

Though it has yet to break into the nation’s top 10 states, Utah ranked as the fourth most improved state on ACEEE’s 2017 scorecard, thanks in part to significant reductions in its electricity and natural gas consumption, according to the report.

Oh — and electric car purchases are now increasing faster in Utah than they are in California.

But a long-term planning report released by Rocky Mountain Power, the state’s largest provider of electricity, has some Utah businesses troubled. The report issued earlier this year indicates the regional utility expects to save 27 percent less electricity through energy-efficiency programs over the next 10 years than it has in the recent past.

And although the utility says it has no plans to cut these programs, some of the Utahs’s earliest participants fear those cash incentives under Rocky Mountain Power’s Wattsmart program are in jeopardy.

At a Thursday news conference, they urged Rocky Mountain Power to preserve the programs, calling it a vital economic issue.

“We want to see more energy savings, not less,” said Kevin Emerson, energy efficiency program director for Utah Clean Energy, which advocates for alternative energy in Utah and across the West.

‘Running on all cylinders’

Varex Imaging, a Salt Lake City-based manufacturer of X-ray equipment and other medical devices, used Wattsmart rebates to reduce its energy use by 21 percent over eight years. That’s enough to electricity to power more than 7,000 homes for a year, said Clarence Verhoef, its chief financial officer.

The international real estate firm CBRE Group used Wattsmart to retrofit several commercial properties it oversees, said Craig Cardall, one of its real estate managers on the Wasatch Front. Without the rebates, Cardall said, the retrofits would have been financially impossible.

“I’m worried about the proposed cutbacks because it will have direct adverse impact on the number of energy conservation projects in our state,” he said.

Comeau, who oversees Wattsmart initiatives like those that help businesses find opportunities to save energy — and, by extension, money — said the company doesn’t have any plans to cut funding or reduce the number of rebates available to customers.

Harder to save energy

Over the next decade, Comeau said, Rocky Mountain Power hopes to accommodate power demand from 89 percent of the new growth anticipated in Utah by reducing the amount of power used by existing residents and businesses.

The company reduced its stated energy savings goals this year for several complicated reasons, he added.

New federal energy standards for light bulbs have meant that Rocky Mountain Power can no longer count substituting an incandescent light bulb for a more efficient LED model as “energy savings.” LED bulbs are now common enough to be considered basic equipment, rather than an upgrade.

At the same time, Comeau said, Utahns have been aggressive enough in their adoption of energy-efficient measures in recent years that most of the easy retrofits have already happened. Further savings will require more difficult and expensive upgrades — such as completely replacing the windows in an older building.

As a result of such trends, it costs Rocky Mountain Power three or four times as much to achieve the same energy savings as it once did, Comeau said.

“We’re not removing any offerings for customers,” he said. “We’re actually adding offerings.”

“Renewables get a lot of fanfare because it’s the shiny ball,” he said, “but energy efficiency has the lowest cost and the least impact on the environment.”

“So our customers are very responsive” to efforts intended to reduce their energy use, said Shepherd, who attributed it to Utah’s unique culture.

“Utahns are conscientious about the environment. We live in a state where we value … recreation and clean air,” he said. “But Utahns, we like to save money, and if we can save money in one place to spend it in another, that’s something we’re interested in doing.”

While Utah ranked among the top states for electricity and natural gas savings, the main reason the state is outpacing neighbors on energy-efficiency improvements is its purchases of electric vehicles, said Weston Berg, the lead author of the ACEEE report.

Utahns bought 1,129 electric or hybrid vehicles in 2016, said Richard Bell, an alternative transportation specialist with the Governor’s Office of Energy Development. That number is high compared to previous years, with additional purchases likely spurred by a state tax incentive, which expired at the end of 2016.

Electric vehicle sales in Utah were 95 percent higher in 2016 than the year before, compared to California’s growth rate over the same period, of 29 percent, according to the state Office of Energy Development. But contrary to prior reports, Utah still lags behind California in electric-vehicle purchases on a per-capita basis.

The state’s network of charging stations and other infrastructure remains about seven years behind that of early-adopting states like California, Oregon and Washington. But Bell said that could change quickly as state leaders across the West join the push for more charging sites and as the traveling range of electric vehicles continues to grow.

Correction: California continues to have a higher number of electric vehicles per capita than Utah. Due to incorrect information provided to The Tribune, a prior version of this story mis-stated that fact.

END_OF_DOCUMENT_TOKEN_TO_BE_REPLACED 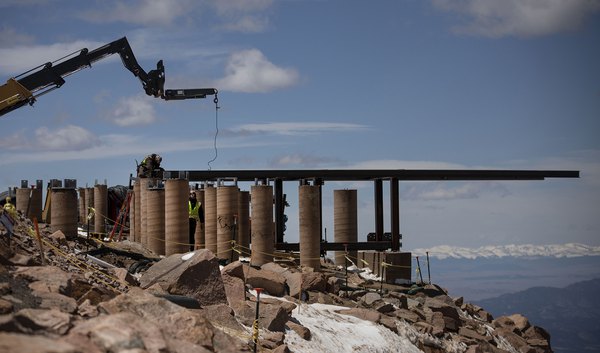 Work on Pikes Peak Summit Complex progresses at 14,115 feet
By Amanda Hancock | The Gazette • 6h ago END_OF_DOCUMENT_TOKEN_TO_BE_REPLACED

Coronavirus in Utah: Utah moves into top 20 nationally in cases per capita, while death rate remains relatively low
By Andy Larsen • 3m ago
Man dies during booking into jail in Iron County
By Andy Larsen • 21m ago