“I don‘t care what he did in life, he did not deserve to have his life taken,” Michelle Shaw said after driving nearly 20 hours with her family from their home in St. Louis to Utah to pick up the remains of her uncle Patrick Harmon.

Shaw and her family had driven on dark, rainy roads — and slept in the car at a rest stop in Nebraska — to get to a rally at the Public Safety Building in Salt Lake City on Saturday afternoon, where some 80 activists had gathered to call for the release of body camera footage from the Aug. 13 police-action shooting in which her uncle had died.

Harmon, 50, had been riding a bicycle at 1002 S. State St. about 10:20 p.m. when he was stopped by police, Salt Lake City police Sgt. Brandon Shearer said in August. He allegedly pulled a weapon on officers who were trying to arrest him on an outstanding felony warrant and was fatally shot.

His sister and nieces arrived at the rally late, after getting lost in a city they didn’t know. Their arrival revitalized a chilly crowd that was frustrated and tired of asking for more police training.

Harmon’s family stood together on a platform to address the rallygoers, talking quietly at first. They spoke about their confusion over how the shooting happened.

Organizers had gotten in touch with the family after the shooting to invite them to the rally.

Activists with Black Lives Matter and Utah Against Police Brutality (UAPB) on Friday staged a call-in to the offices of Salt Lake City Mayor Jackie Biskupski and police Chief Mike Brown to press for the release of more information, including the footage. In August, Brown had said the footage was under review by Salt Lake County District Attorney Sim Gill, and once Gill renders a decision, the video would be released to the public.

“This is about transparency,” Scott said.

And about understanding what happened.

It’s hard, not knowing “what really happened to your family,” Harmon’s sister, Antoinette Harmon, told a Tribune reporter as she wiped tears away from her face.

Police haven’t released additional details about why Harmon was stopped or the weapon he carried.

Shaw said she had never known her uncle to carry a gun or a knife, adding that she didn’t carry a gun, because it was too big of a risk.

“[Black people are] still scared to carry them,” Shaw said after the rally, as she watched her nieces and nephews play. “Because soon as [police] see us with them, they see a threat, and there you go getting shot.”

The night Harmon was shot, police had used de-escalation tactics, Shearer said. Details of what happened next are unclear, but an officer fired and Harmon was critically injured. Police gave him first aid at the scene, then he was transported to the hospital, where he was pronounced dead a short time later, according to Shearer.

One officer was placed on paid administrative leave, according to Brown. That officer’s name has not been released.

The chief declined to say the type of warrant for which police had tried to arrest Harmon that night. Court records, however, show that a $10,000 felony warrant was issued in April after Harmon failed to show for sentencing in 3rd District Court.

In that case, Harmon last year had pleaded guilty to second-degree felony aggravated assault with serious bodily injury for attacking another man in Salt Lake City. The victim’s jaw and nose were fractured, charges state. At the time of the March 2, 2016, attack, Harmon listed a West Jordan address.

In May, a judge issued a $15,000 warrant for Harmon when he failed to comply with probation requirements after pleading guilty in a misdemeanor drug possession case, court records show. In 2000, Harmon was sentenced to prison after pleading guilty in separate cases to second-degree felony robbery and third-degree felony burglary, Utah court records show.

Harmon had moved to Utah in 2000 because he wanted to change his life, Antoinette Harmon said.

Patrick Harmon desired to do better, said Jacque Pace-Fivas, whose daughter had dated him.

“Patrick had many wonderful qualities, and he also had his demons,” Pace-Fivas said. “He was a person who was tormented by the constant pull between those two sides. At his core, he was a good man.”

His mother had died while he was in prison. He had two children, a daughter and a son, who are both in their 20s, according to Antoinette Harmon.

He was a nice man who looked “nerdy” and had a “big, belly laugh,” said Pace-Fivas, adding that Harmon had wanted to get a job helping people with drug problems.

But he was stuck in a vicious cycle, she said. Many companies wouldn’t hire him, and many landlords wouldn’t rent to him because of the felony. He tried to avoid places like The Road Home, where drugs are prevalent, she said.

But Harmon’s most recent address, according to November court records, was The Road Home shelter.

Drugs disrupted Harmon’s entire personality, she said. He became more violent and ended up in prison. But he was trying to change, Pace-Fivas said.

And he was more than his criminal record, Scott said.

“Black people have the right to make it to trial. We don‘t care if you have a criminal record a mile long,” Scott said. “We deserve our day in court.”

Harmon’s family hopes to get a police report this week. Then they’ll return home to St. Louis with his ashes.

But even once she knows more about what happened, Shaw is afraid the violence will continue. Her uncle’s shooting is part of a bigger problem of racial profiling, she said.

“I‘m just hurt,” Shaw said. “I hope you never have to lose a family member.”

END_OF_DOCUMENT_TOKEN_TO_BE_REPLACED 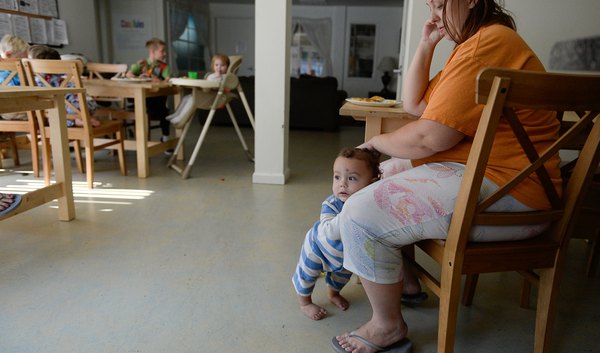